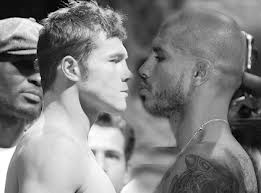 A bout between two rival countries and superstars may take place next year. Saul “Canelo” Alvarez of Mexico may be set to face off against Miguel Cotto of Puerto Rico.

Talk of the two fighters facing each other has gone on for quite some time now and with Cotto having recently met with Golden Boy Promotions to discuss a possible bout with Alvarez and other Golden Boy fighters there is a high possibility that the fights will happen, especially with the money being offered to Cotto.

On BoxRec.com it has the fight between Alvarez and Cotto listed to take place at the MGM on March 28th so there is a high chance but they have had wrong information before so until then it is pure speculation.