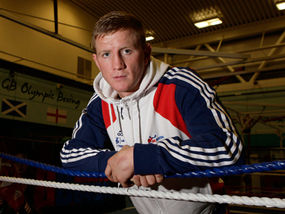 Rising junior welterweight prospect Bradley Saunders is quickly making a name for himself on the British boxing scene.

I got a chance to catch up with Saunders recently to talk about his career thus far and discuss his future in the pro ranks.

TBV: First of all I’d like to thank you for taking time out of your busy schedule to speak to me.

TBV: What age did you first put on a pair of gloves and what was your inspiration?

BS: I was about 3 and my mam Tracey took me to Spennymoor Gym when I was 7. I seen my dad Jeff box and I liked it.

TBV: Who was your childhood hero and why?

TBV: How was the step up from ametuer to the pro game and what do you find different?

BS: It’s a different sport all together. I enjoy it, tough sport, its a business not a sport anymore..

TBV: Can you talk about your relationship with Frank Warren? Is there a certain path you’re looking to take towards a British title maybe. Willie Limond doesn’t have an opponent yet.

BS: Frank is a top man, would never say a bad word about him, delivers for me what he has said he has done. I would love the Willie Lemons fight or any other in Britain. I am learning all the time.

TBV: You’re 28 now, made your pro debut not long after your 26th birthday. Do you feel you need to push on, start fighting that next level opponent and get in contention for some titles?

BS: Yes for sure. That’s why I am in the sport, had a few injuries but looking forward to 2015.

TBV: Do you keep sharp in the gym between camps and how do you relax and have fun?

BS: Yes I always eat well and I’m in the gym. I relax with my partner Stephanie and my boy Leyton. I have a good team around me in MGM Marbella as well.

TBV: You mention you may be featured on the undercard to Fury vs. Chisora 2 in November. Can you tell us more?

BS: Really not sure when I am out next, but it will be before end of year.

TBV: Your last two fights have been 10 rounders. Do you think you need a real test to take you the distance and test your stamina?

BS: My stamina is my main asset. I get better and stronger. My sparing partners will tell you that 2 or 3 some times.

TBV: What is the best piece of advice ever given to you about boxing and who gave it to you?

BS: Don’t cut corners ever in boxing and life in general, my dad Jeff told me.

TBV: Every life is a journey, what do you expect from your journey?

BS: To be number 1 and nothing less.

TBV: If you weren’t a pro boxer, where would you be today?

TBV: What would it mean to you to become not only a world champion, but only the third to come out of the North East? (England)

BS: Everything. That’s my aim or I wouldn’t be in the sport. I do believe I can be a world champion. #TeamNorthEast #Boxing