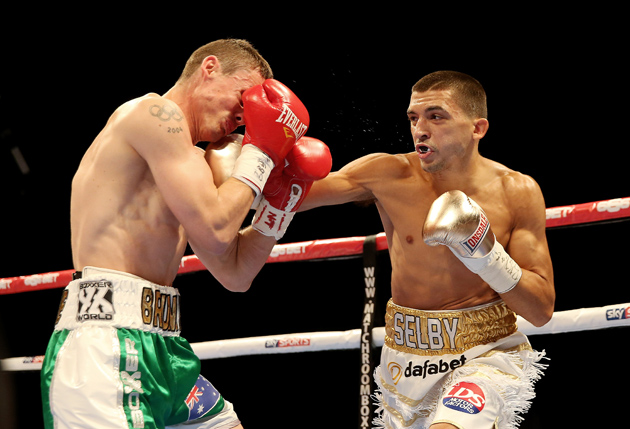 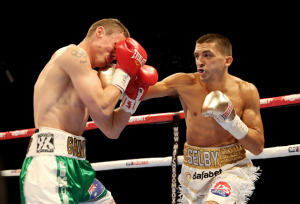 Lee Selby secured his shot at the IBF Featherweight World championship by defeating Australian Joel Brunker yesterday in the O2 Arena in London, England. The 27-year old Welshman stopped his opponent in the ninth round.

Selby started the fight cautiously, working behind his jab, while moving away from his opponent. Brunker came forward all night, but wasn’t able to figure Selby’s jab and movement out and hardly landed anything of note in the fight.

Selby was quickly building up a comfortable lead on the scorecard, but the crowd was getting restless during the one-sided fight. Trying to please the crowd, Selby started to increase his offensive output in the middle rounds and with effect. Selby landed beautiful combinations on his opponent, who had no answer.

In the ninth round, Selby was able to hurt Brunker with a left hook to the body. A relentless attack followed. The Welshman had Brunker trapped in the corner and he started teeing off on him. After landing a beautiful right uppercut, the Australian fell into the ropes. The referee stopped the bout after 2.39 minutes in the ninth round. Brunker didn’t look overly hurt at the moment of the stoppage, but no argument was made from him or his corner.

With this win, Lee Selby is in line to fight Evgeny Gradovich for the world title. Eddie Hearn stated after the fight, that they will try to bring the ‘Mexican-Russian’ over to the United Kingdom. Selby improved his record to 20 victories with 8 knockouts and one defeat. While Joel Brunker’s record dropped to 28 wins and one loss.

In the co-main event, Anthony Joshua made very quick work of his Russian opponent, Denis Bakhtov (38-9). The Olympic heavyweight champion stopped his Bakhtov in the first minute of the second round.

Joshua started the fight aggressively. Throwing and landing a variety of punches in the first round. His overmatched opponent had clearly no answer for Joshua’s skills. In the second round, Bakhtov decided to go for broke and started trading bombs with the heavyweight sensation.

Joshua, who turns 25 next Wednesday, was unfazed by the few shots Bakhtov managed to land. While he was able to land right and left hooks at will. After getting rocked a few times early in the round, the referee decided to stop Bakhtov one minute into the second round.

With this victory Anthony Joshua improves his record to nine wins, with nine knockouts in nine fights. Joshua is clearly ready for a step up in competition. However, his next opponent will be 39-year old veteran Michael Sprott, who is arguably a step back from Bakhtov. Sprott was stopped in his last fight by Kali Meehan in the first round.

On the undercard, John Ryder (19-1) continued his comeback by stopping Thephilus Tetteh (16-7-2) in the fifth round. John Wayne Hibbert managed to do the same against Leonardo Esteban Gonzalez, while Tommy Martin (10-0) stopped his opponent, Matty Tew (14-3), in the seventh round.

In a British 140-pound title fight, Tyler Goodjohn (11-3) won a majority decision over Ricky Boylan (12-1). The upset of the night came from Joe Hughes (9-1), who managed to stop, previously undefeated Phillip Bowes, in the tenth and final round.