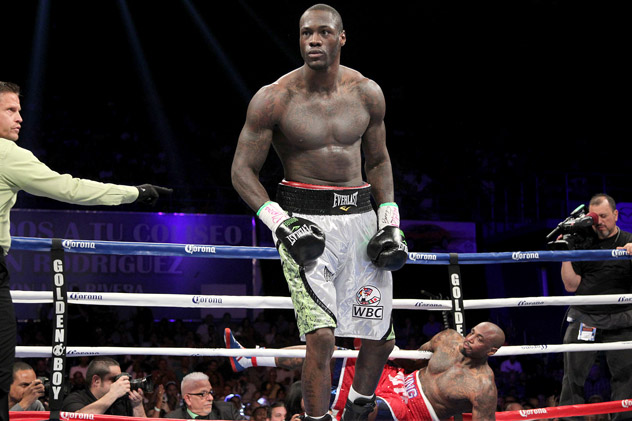 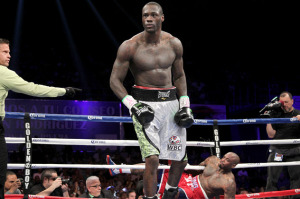 I recently had the chance to talk to heavyweight contender Deontay Wilder. The next time Wilder enters the ring, it will be with an unblemished record of 32-0 with all 32 of his win coming by way of KO, which is a record for consecutive fights to start a career all ending by KO. Wilder went over numerous topics which included his upcoming bout with WBC Heavyweight Champion Bermane Stiverne, the upcoming purse bid for the fight, his impressions of the future of the heavyweight division, as well as what he feels about all the talk from Bryant Jennings and Tyson Fury.

Since we had the interview, the purse bid has once again been pushed back. He originally said that everything should be finalized by next weekend, but now that will all be delayed. Recently Kid Chocolate, Peter Quillin had a purse bid that was won by Jay Z’s boxing group, whether he was forced or just advised to not fight for him by Al Haymon, Quillin decided to turn down the biggest payday in his career and also drop his championship belt in doing so.

So because of this I asked Deontay, who is also advised by Al Haymon, if he would also do the same thing. “Everyone’s got a different situation. People don’t know. You can’t assume. I wouldn’t want another guy to promote my guy that is fighting for a title. Peter was just in a different situation,” said Wilder. He seems to be fine with who ever gets the fight and is not is the same situation that Quillin was in.

Wilder has fought on HBO, but is with a group that primarily fights on Showtime, so I asked him if that may become a problem between who gets the fight and his allegiances. Wilder stated, “I’m allowed to fight on any network. There’s politics, I don’t like this guy or I don’t like that guy, but the fighters are fine with it. It doesn’t matter to me. I’m going to change the face of boxing. I’m about to bring  it back and do things that haven’t been done in a long time. I’m trying to change the game. If someone has their personal problems, that’s their loss.”

We then talked about if it’s been frustrating waiting this long to finally get a big fight. Wilder replied, “Not really. Once you got a game plan, and your game plan goes as you have planned, it makes it fine. We planned out what we wanted and what we was looking for. We may not have gotten every opponent we wanted, but I just hate the back and forth, I don’t like the he didn’t pickup the phone stuff.”

We talked about how a lot of people wanted to see him vs. Bryant Jennings for a while, but Wilder said, “A lot of these fights don’t make sense. It makes sense to the fans, but not the fighters and their careers. Jennings is getting his exposure. People wanted to see that fight, but on the business side, it didn’t make sense. It wasn’t a big money fight. Fans don’t care about the money, they just want to see the fight. Only thing I would have won is bragging rights. But now, couple years later, now it makes sense. Sometimes things don’t make sense cause the business side don’t make sense. That’s why it’s important to have that belt.”

We then moved on to the topic of Stiverne, whether he does anything that might give him trouble. “Nothing at all, his favorite punch is overhand right and left hook. How is he going to do that against me? He’s gonna have to figure out how to fight this guy. I’m the most athletic, baddest, hardest hitting, and tallest fighter he has had to face. My arms are so long you gotta get inside and if you can, it’s a whole new game. He can’t find a sparring partner to mimic me or what I do,” said Wilder.

When talking about if he was at least impressed with his power against Chris Arreola, a guy known for a good chin, Wilder said, “Not impressed with the power. We’ve see Arreola on the ground with that Walker guy. Chris is not a boxer, he’s brawler. Chris isn’t fast as me and he hit Stiverne, now he’s seeing a tall guy, I’m going to have fun with him. Make it look easy. This is definitely not going past 4 rounds. I know they’re scared, Don King is scared, Stiverne the only guy that Don really got to keep him relevant, trying to hold onto that spot. Stiverne and his people are scared. People putting stuff in his head, but they nervous.”

I mentioned that the thing that most people criticize him for is, since he has such a large reach over almost every boxer in the sport, why doesn’t he use the jab more and if that’s something he’s working on. Wilder responded, “I’m great with my jab. I throw it when I think it’s appropriate to do it. I can throw 5-6 jabs if I got to. You see 32 opponents and 32 KOs, so must be something I’m doing right. It doesn’t matter the opponent, you just not going to KO 32 guys without knowing what you’re doing.”

Wilder said he recently spoke to former heavyweight champion Chris Byrd and he told him that Klitschko still calls him the future superstar of the division, that’s something that Wilder really appreciates even after all of these years. Wilder then said “I’m going to bring it back for America. I’m not even a champion yet and some champions don’t get the recognition that I do. Lot of guys are jealous cause I’m in the spotlight, everyone is talking about Deontay Wilder.”

We quickly moved on to his twitter enemy Tyson Fury, who wants to fight Wilder next. So I wanted Wilder’s take on Fury now wanting to fight him. “Everyone gonna want a shot at me, I’m going to be the new heavyweight champion of the world, world’s most wanted, Mega-million dollar fight. I got more fans than him in his own country. Man 95% of people over there want me to whoop his ass. We already promoted it before so there wouldn’t be much needed. I love the UK, I want to beat him over there. I want to be known as a true champion. I would go into enemy territory. I want that type of legacy. I want that pressure. It just makes sense. So I got Jennings next, but he can get in line. His time coming,” said Wilder.

Wilder’s last comment was to his fans, “All my fans that listen or read about me, especially all my day 1’s. You forever got my love. They didn’t care whether I was a champion, win, lose, or draw, I love those guys. Just want to thank you for supporting me and believing in me. Here we are, we are right where we want to be. Soon we’ll have the belt and you can go even harder, argue for me in the bars, fight even harder for me. BOMB SQUAD!!!”

Like him or not, Wilder has the type of personality that makes it fun to cover boxing. He talks a lot of trash, but he’s willing to fight anyone that wants to fight him and he’s a knockout puncher. With so many fighters that fans complain about making the sport boring, isn’t is nice to have someone that just wants to get guys out of there early? Now he faces his toughest competition in Stiverne. If he can put him away early, the sky maybe the limit for the young power punching fighter from Tuscaloosa, Alabama. Enjoy the fights.