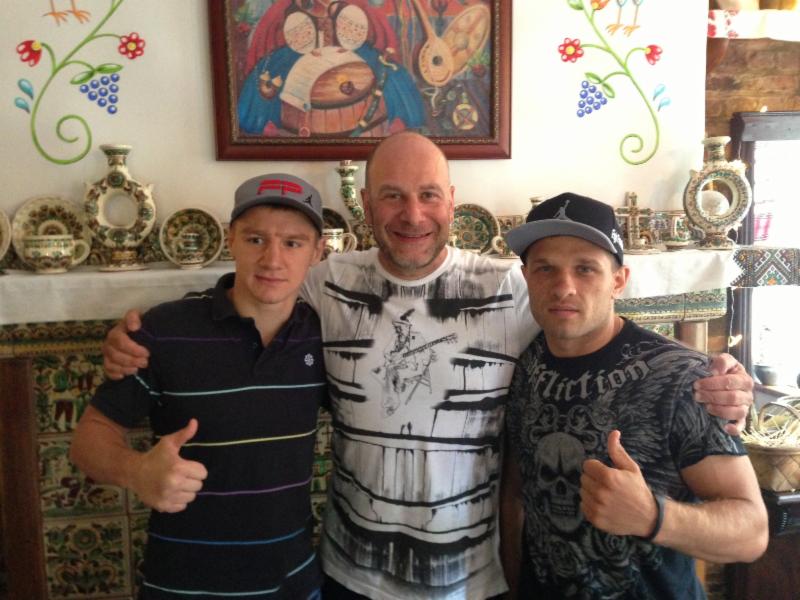 New York, NY (7/16/14) – Earlier this afternoon, DiBella Entertainment and Fight Promotions officially held a meet and greet for newly signed Ukrainian amateur stars Sergey Derevyanchenko and Ivan Golub in downtown Manhattan at the beautiful Taras Bulba Ukrainian restaurant. Speaking to a number of important Ukrainian and Russian media, Derevyanchenko and Golub both talked about their excitement to be fighting in the US, especially in New York City. Promoter Lou DiBella’s excitement was almost too hard to contain, as he talked about the possibilities he sees for these two stellar athletes.

Derevyanchenko is set to make his official pro debut on DBE’s upcoming Broadway Boxing card next Wednesday at the famed B.B. King Blues Club and Grill in midtown Manhattan. Golub was also scheduled to appear on the card in his second professional fight, but was forced to withdraw yesterday after suffering a minor hand injury during training.

Below are quotes from both Derevyanchenko and Golub, as well as DiBella, Kurt Emhoff, of Fight Promotions, and trainer Andre Rozier.

LOU DIBELLA: We are here today to introduce two tremendous young talents in Sergey and Ivan. We are working with Fight Promotions Inc. on promoting and building these two fighters here in New York City and we couldn’t be happier to be a part of both of these fighters’ careers.

Andre has some of the most talented fighters just not in New York, but in boxing, and the fact that these young guys get to work with that type of talent on a daily basis will only help them develop even faster in their careers.

Sergey was one of the greatest amateurs in the history of Ukrainian boxing. He was the king of the World Series of Boxing (WSB) and now he is as eager as we are to have him make his pro debut next Wednesday on our Broadway Boxing card at B.B. King Blues Club and Grill.

I am pleased to be able to work with guys that are this talented and our Broadway Boxing series is the perfect place to groom them and introduce them to the tremendous Russian and Ukrainian community here in NYC.

I have said this before and I truly believe that Sergey is hands-down one of the best prospects in all of boxing. He has Golovkin ability. He has tremendous power in both hands and is gifted boxer as well. He is the total package. He is a genius inside the ring. There is no doubt in my mind that Sergey will be rated in the top 10 in the middleweight division within 10 fights. When you have had 390 amateur wins, you know what you are doing inside the ring and we expect Sergey’s rise up the ranks to be meteoric.

In Ivan, you have a fighter with extraordinary power. Like Sergey, he also had a stellar amateur career, but he is not as advanced at this stage of his career as Sergey. We will move Ivan along more gradually, but, like Sergey, we see a championship in his future.

These guys represent the American Dream. You come here for a better life and a better opportunity and they are coming here to fight the best and be the best. I truly believe that they will be embraced by boxing fans here, the mecca of boxing, New York City.

These guys are both predators in the ring. They will never be in a bad fight. People are going to love to watch these guys fight.

The signings of these two young guys are two of the biggest and greatest signings I have ever had in my career.

Sergio Martinez was and is the greatest fighter that I have ever promoted, but Sergio is near the end of his career.  I knew that I needed to look to the future, and these guys are the future.

There is no doubt in my mind that both of these fighters will be fighting for a world championship down the road.

KURT EMHOFF: On behalf of Fight Promotions, I would like to say that it is always a pleasure to work with Lou.  Words can’t express what Lou means and does for this sport. He is a guy that truly cares about the sport. He is the engine that has kept it running here in New York and we couldn’t be happier to be working with him.

Our goal with Fight Promotions is that we are taking these tremendous athletes from the Ukraine and Russia, and using our pipeline with Max (Alperovich, Fight Promotions) to bring them over here to the US. We didn’t get to see the Klitchskos develop here in the US and even Golovkin was under the radar until recent years. With these two fighters, you are going to see them develop from the ground up, and see real stars built right here in the media capital of the world from the start of their careers.

IVAN GOLUB:  I was very excited to have my pro debut last month. I was maybe a little too excited and I was trying too hard to score the knockout. We are working hard in the gym every day with Andre (Rozier) and Gary (Stark Sr.) and improving daily.

Unfortunately, I injured my hand this week in training, so I had to pull out of the fight, but I will be back in action very soon and looking forward to fighting in New York City in front of the large Ukrainian fan-base here.

SERGEY DEREVYACHENKO:  The US is the mecca of boxing. If you want to be the best in the world, you need to be here, training and fighting.  I am very anxious to make my pro debut and am looking forward to putting on an exciting performance for all of the Ukrainian and Russian people here in New York City.

ANDRE ROZIER: It has been a true pleasure to work with these two guys because they never say no. Everything you ask them to do they do it. I have pushed these guys to the limit and they just keep going and keep grinding. They are great students. They know how to fight, but there are things that we have to bend and sharpen up a bit and they are willing to accept that, and as a trainer, you just can’t ask for more than that.

Lou is a longtime friend of mine and is one of the promoters that I can say I truly respect and trust. He is an honest guy, and he really does cares about the sport. It’s always a pleasure to work with him and I know that he is the perfect promoter to guide the careers of both Derevyanchenko and Golub.

Sergey and Ivan are my Ukrainian sons. I tell people that Sergey is the Doberman pincher and Ivan is the pit bull.  Sergey is a fantastic technician that does everything great. He is very sharp, very fast and accurate with his hands, has great defense, and creates opportunities for himself inside the ring. While we still need to work on some things with Ivan to get him to that level, his power is flat-out scary.  I have had the pleasure of working with some tremendous punchers in my career and I can tell you that Ivan is right up there with the hardest punches that I have ever seen. Both of these guys are sparring with my other top guys, Danny Jacobs and Curtis Stevens, as well as the other top fighters out of New York right now, and they are going eight rounds or better with them and doing fantastic.

There isn’t a doubt in my mind that you will be hearing sometime in the near future, “And the new, and the new.”