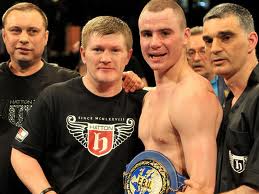 Sergey Rabchenko (25-0, 18 KOs) is a 28-year-old rising star under Hatton Promotions, striving to establish himself as a top fighter in the light middleweight division. He will face his stiffest competition up to date, in Anthony Mundine (46-6 KO’s 27). The fight will take place in Mundine’s native country of Australia.

According to The Courier-Mail, the fight has reportedly sold close to 12,000 seats in the Hisense Arena. The huge crowd can be credited to Mundine’s popularity in his native country. Despite being 39 years old, he remains a fan favorite, and Rabchenko will be forced to play the villain role on Wednesday, November 12th.

Ricky Hatton has shown full confidence in Rabchenko, and believes his fighter will get his opportunity at a world title shot very soon.

Rabchenko exuberates the same confidence in himself by stating in Hatton BoxingTV, “I’m sure [it’s going to be] no problem for me. I have two powerful punches, good technical skills, a good team in my corner, and I’m not nervous about the fight.”

He also went on to say, “After this fight, it will be a world title. I don’t know who, but I want Floyd Mayweather Jr.”