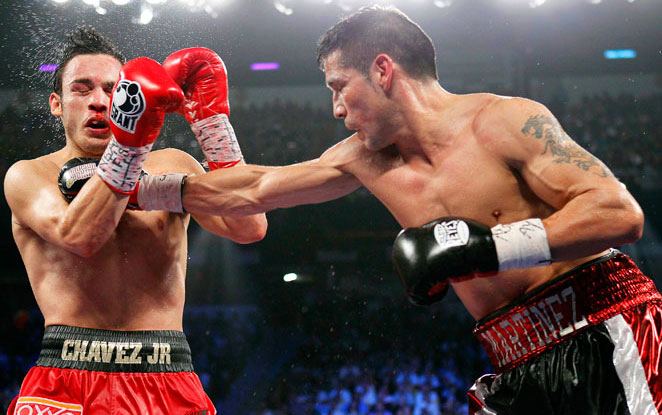 New York, NY (9/19/12) – Just hours before he was to step into the ring for the most important fight of his life against the now former WBC Middleweight Champion Julio Cesar Chavez Jr., The Ring Middleweight Champion Sergio Martinez took the time to make a dream come true for one special family.

Days before the fight, Martinez’ camp received a touching letter stating that a family of five was driving 550 miles from Albuquerque, NM, to attend the fight to see Sergio, their favorite fighter.  The family’s two oldest sons are severely disabled, with the oldest suffering from Cerebral Palsy while his brother has Downs Syndrome.  The oldest son’s birthday had just passed on September 14, and while they knew their request “would be a stretch,” they asked if Sergio could meet the boys.

“Even though I was deep in my preparation and focused on the fight later that night, my team told me about a special request from a fan who was traveling very far with his sons to see my fight.  I learned about the hardships that both of his sons face and that it would be a birthday surprise if I met with them and posed for a photo. There was no way I was going to let them down.”

“I believe that Karma is powerful,” said Martinez’ promoter Lou DiBella.  “Sergio met with these young men just hours before his fight, rearranging his schedule to do so. He invited no press or camera crews and it had nothing to do with last minute promotion. It had to do with a sense of compassion and social responsibility by a kind, good hearted man.”