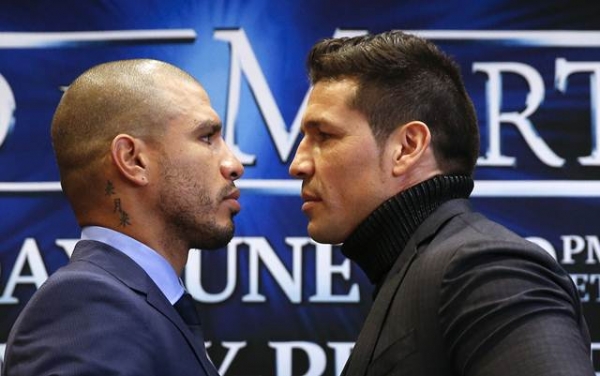 It has often been said that a boxing match doesn’t start when the first bell rings on fight night. The battle usually begins at the negotiation table. We’ve seen fighters make demands on all types of things in the past whether it be the size of the ring, the type of gloves used or the contracted weight limit. Usually the so called A side of the promotion is the one making these demands and more often than not his opponent usually has to give in or risk the fight not happening.

WBC Middleweight Champion Sergio Martinez unfortunately found himself opposite the A side during the negotiations for his June 7th title defense against three division champion Miguel Cotto. “For one it’s all silliness and it’s ridiculous that I have to make these concessions. That’s why I’m really upset but for me it’s going to serve as more motivation basically coming into this fight, and I’m not going to let the silliness and ridiculousness get in the way of my goal,” he explained.

Regardless of the tough negotiations, Martinez doesn’t harbor any animosity toward Cotto claiming, “As a person and as a fighter I respect him. I haven’t lost any respect for him and more than anything else my focus is going to be on respecting him as a fighter, so that is the key here.”

Martinez hasn’t fought since last April when he defended his WBC Middleweight Title against Martin Murray because of injuries that he suffered to his right knee as well as a broken left hand. The knee injury first surfaced in Sept of 2012 against Julio Cesar Chavez Jr. and after his fight with Murray the knee required a second surgery. When asked about his sudden back luck with injuries these past few fights Martinez responded, “It’s mostly due to the years of training and the years of the wear and tear on my body. Training at a high level obviously for a long period of time at a high intensity, you’re going to be more prone to these types of injuries, so that’s why I believe that I was more prone in the Chavez fight. It could be a combination of both but in a sense I feel it was more a result of training at such a high intensity for so many years.”

There have been rumors that because of the injuries Martinez has not been able to train as he normally does but he refutes those claims, “Personally I feel better than ever and as I matter a fact I feel perfect and then some. I want to assure people that that is the case. I feel that my will and my drive has been helping me in this campaign. It makes me feel good that my trainers are seeing me better than ever as well, so the assurance comes from me as well as my trainers that this training camp is going well.”

Some people are questioning if Martinez may be rusty as a result of the long layoff but he begs to differ. “What I can see throughout my training if anything it’s helped me. I feel that this time off has helped with my injuries and my training is a testament to that.”

Although he believes that the layoff and injuries won’t affect him on June 7th, Martinez acknowledges that he may not be the same fighter that he was a few years ago. ”When three years pass you can get better or you can get worse but nobody stays the same. In my case I have injuries but I feel that I have recovered from them and more than anything else I have experience and experience is something that you can’t buy,” he explained.

Martinez is the favorite going in against Cotto and most people are expecting him to win. Already questions about future fights have risen but Martinez is focused on the current task at hand. “I want to stress that my focus is on Cotto and whether it’s Golovkin or Mayweather or any other rival these are conversations that would interesting to be had but I want to stress that I have the utmost respect for Cotto and having any other conversation right now except for Cotto would go against that.”