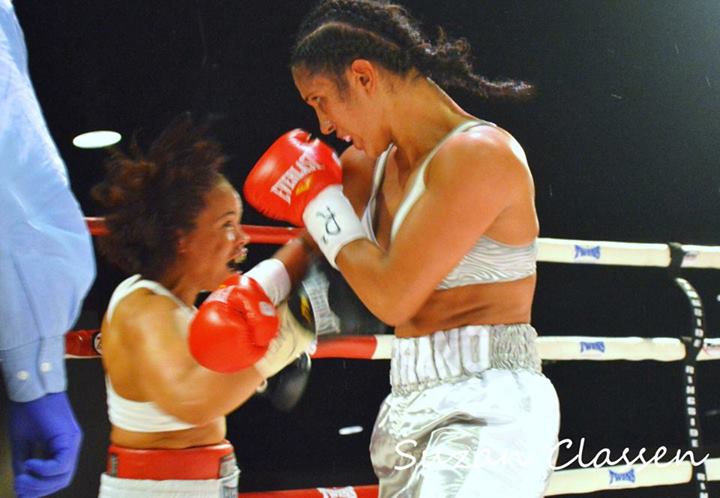 The summer here in NYC is heating up and so is boxing in the capital of the world. This past Saturday night at the Resorts World Casino, New Legends Boxing along with W.O.N. Promotions and DiBella Entertainment brought an eight fight card packed full of action as they packed the venue full of loud, true fight fans. With local talent across the board, supporters poured in to see if their favorite new fighter would continue on successfully to possibly one day be at the top of their class.

The main event would definitely be put in the “save your best for last” category as once defeated Amanda “The Real Deal” Serrano (17-1-1 12KO’s) took on fellow Brooklyn native Dominga Olivio (8-7-1) in a six round female featherweight match up. The fight would start with the super aggressive southpaw Serrano, shooting stiff jabs to the face of Olivio as she looked to land hard left hands down the pipe, Olivio although outgunned in the speed and power department definitely was game to fight back and did so as best as she could. After having Olivio reeling in the closing seconds of the first round, Serrano began the next stanza by piling up with body shots and an overhand left that hurt her foe as a follow up put her down in what was ruled a slip, another barrage drops Olivio but no credit was given to Serrano who kept her fierce composure. The third round would be fatal as Serrano really went in for the stoppage, a full arsenal of body and head, hooks, overhands, jabs and hooks turned Olivio into a punching bag as she was barely able to see past the punches to throw her own, controversy would ensue as the ring doctor would climb on the apron to call off the fight and wave his arms for about 20 seconds as the referee watched Olivio get massacred on the ropes. When the ref finally gained consciousness he waved off the fight and saved the hurt fighter from further punishment awarding Serrano her 13th knockout win at 1:18 of the third round.

The supporting match for the night would pit Shawn “Killa” Cameron (5-0 3KO’s) from the fighting borough of Brooklyn, against Ohio native Dominique Foster (2-2-1) in a light middleweight fight over four rounds. Fighting out of a southpaw stance, Cameron, the seemingly more solid fighter in the ring; would shoot a jab as he looked to time and find an opening on the taller Foster. After a feel out round in the first, Cameron started to warm up landing an overhand left that hurt Foster who later slipped after a barrage and rose on unsteady legs, seemingly injured and also outgunned by the hard charging Cameron who opened up with hard lead lefts. The end would come in-between rounds two and three as Foster complained of leg pains and did not want to continue which helped bring the disappointed Cameron’s record to 6-0 with his 4th KO coming in the second round.

With Lou Dibella hosting a card north of NYC in Connecticut, he sent two of his young, up and coming fighters to Queens to stay busy. The second of his two fighters would be ultra-popular Bryant “Pee Wee” Cruz (4-0 4KO’s) of Port Chester against North Dakota’s Tomi Archambault (1-4 1KO) in a super featherweight match. Action started swiftly as Pee Wee’s supporters cheered his name at the top of their lungs, urging their man to get another knockout win. Cruz would definitely listen to the crowd as he bombarded his opponent with one-two’s easily backing up the outmatched Archambault who was caught with a left hook-overhand right combination that dropped him almost for the count. Tasting the power of the hometown fighter, Archambault looked like he wanted a way out and Cruz would find one for him landing another barrage to drop his foe and a stiff jab that put the wobbly fighter on the seat of his pants as the referee waved it off. The winner by TKO at 2:22 in the very first round would be the still undefeated Bryant Cruz who is now 5-0.

Two young and fresh cruiserweights would seek their first victories as Jay Rodriguez (0-0-1) of Queens, NY and Ken Rosser (0-2) of Philadelphia, PA squared off over four rounds to finally sample the taste of victory. Rosser would prove that his winless record came with some experience as he was able to utilize a southpaw jab that backed up Rodriguez, but he would not have too much success as Rodriguez was able to use his own jab that lured his opponent into straight right hands. The pace would slow down a bit as the Queens fighter kept his distance and shot in occasionally with body shots and straights to the head that backed Rosser up. With both guys not wanting to feel each other’s power much, things looked to get dull until Rodriguez kicked in to another gear and started landing body shots; a hook to the body and a right to the head would drop Rosser and another crushing left hook to the body would put his man down who almost didn’t get up. The inevitable would happen as Rodriguez teed off on Rosser against the ring post until the fight was waved off at 2:06 awarding him his first victory with his first knockout.

In a battle of skill versus volume, bantamweights Ryan Ramaya (1-0-1 1KO) and pro debuting Angel Siguenza both of Queens, went toe to toe for four rounds. Using his superior technique, Ramaya would try to keep his opponent at bay by pivoting and landing right hand jabs, but like the little engine that could, Siguenza threw caution to the wind and came out throwing punches like a windmill. The pace would continue as Ramaya landed more accurately but far too few in between as Siguenza, still green in the sport, punched with both hands and tried to land everything he could, wherever he could and sometimes with his chin up in the air. The shorter Ramaya would make Siguenza pay a few times during the contest by hurting him with various uppercuts and hooks but they were never followed up on enough as Siguenza who was not discouraged; came back winging shots. Looking like an upset was brewing as the far more active Siguenza won over much of the crowd, the bout was ruled a draw when scores of 39-38 for Ramaya and 38-38 x 2 were read to the audience, leaving open the possibility for a fun rematch.

The other DiBella fighter on the card, former national amateur champ and Freeport, Long Island native; Patrick “All” Day (3-0 2KO’s) would face off against Compton, CA’s very own Carl “Sugar” Hill (1-4 1KO) in a light middleweight contest. In front of many of his family and friends, Day would own the fight as he was able to mix it up downstairs and upstairs from the time the bell rang while throwing double hooks that bothered the game Hill. In the opening 30 seconds of the second round, Hill was greeted by a check hook that dropped him for an eight count but he survived to be chased around the ring by Day who kept his defense tight and landing a stiff jab. Looking gassed out in the last two rounds, Hill was still trying his best to land his own power shots but Day stayed in range only to land his own while using great head movement to dominate his foe with a full array of punches. In the end scores were read as 39-36 40-35 and 40-35 awarding the charismatic Day his fourth pro win in as many bouts.

In a match featuring another pro debutant, former NY Silver Gloves winner Gary “Buddah” Beriguette took on winless Bronx fighter Carlos Nieves (0-3) in a welterweight battle. Wanting to impress his raucous group of supporters, Buddah opened up with a ferocious attack trying to chop the taller Nieves down with hooks on both sides of his body. Looking overpowered, Nieves was bullied against the ropes as Beriguette continued to crowd him and come forward with uppercuts and left hooks. Entering only his second round as a pro, Beriguette looked comfortable and with plenty of energy as he met Nieves in the center of the ring to brawl, dropping Nieves with a left hook and right hand combo that hurt his opponent, he followed up with what was two minutes of hell for the Bronx native as he had to eat everything that was thrown without giving much back. Glad that he made it out of the round, Nieves returned to his corner that stopped the contest awarding Gary Beriguette his first professional victory with a TKO in the 2nd round.

The opening bout of the night featured unlucky Marcus Beckford (0-0-2) of Freeport, NY against the always ready Gustavo Medina (1-5-1 1KO) of Eloy, AZ. Looking to start faster than in previous fights, light middleweight Beckford controlled much of the matchup by staying at a distance and firing away with lead rights and check hooks that had Medina dumbfounded and turning all night. Constantly looking for an opening, Medina kept Beckford alert as he pressed onward but Beckford would stay on his journey to victory chopping the shorter man with lefts to the head and body shots. In the last round Beckford would find great success with body shots that bothered Medina but also one that landed below the belt that possibly gave the 1-5 fighter a chance to regroup, but either way Beckford would shutout his rival as scores of 40-36 were read across the boards awarding him his first win and smile on his face