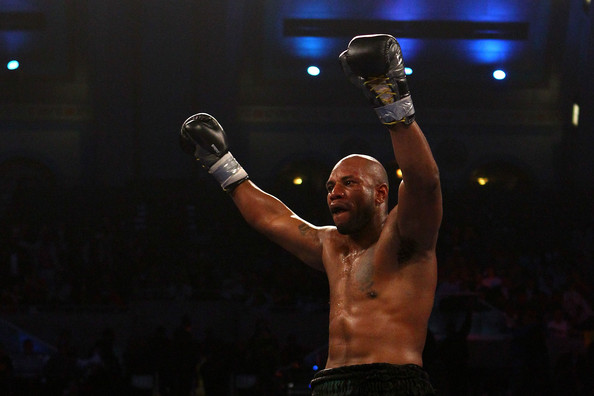 Not all great things are planned in this world. The same thing can be said about boxing, and its greats. At the age of 12, American Heavyweight boxer Seth “Mayhem” Mitchell had his mind set on becoming a professional basketball player. However, he stopped growing in height, and began growing in frame. Mitchell became a football player, and a very good one at that. He became a stand out linebacker at Michigan State University, and even garnered All-American accolades as one of the best linebackers in the country. However, after suffering a knee injury and having multiple knee surgeries, Mitchell was forced to hang up his cleats and shoulder pads.

It was a rough period for the former All-American Linebacker, but he had a strong support system in his wife, Danielle. “To be honest man, I don’t know where I would be if she wasn’t as supportive as she was,” Mitchell told ThaBoxingVoice.com.  While watching an episode of the ESPN series, The Contender, Mitchell saw a familiar face in the boxing highlights. He saw a former opponent on the gridiron from Notre Dame, Tom Zbikowski, make his professional debut on the Miguel Cotto-Paulie Malignaggi undercard in 2006. Then Mitchell said, “A light switch turned on in my head and I said to myself, if he could do it, so can I.”

So Mitchell got on the horn and called his former high school coach, Maurice Banks to see if he could connect him to someone in the local Maryland boxing scene. Banks hooked Mitchell up with his current manager, Sharif Salim. Mitchell had to pack his bags from Michigan and head back to Maryland to start his boxing career. However, without the full support of his wife, he wouldn’t be able to leave with a clear mind. “She’s the woman of all women in my eyes.  She’s been through all the tears and the surgeries. She was 8 months pregnant, working fulltime, and going to law school part time when I told her; hey baby I got to go back to Maryland to start my boxing career. She was supportive 100% and didn’t give me any grief,” said Mitchell.

So with a clear mind and a new ambition, Mitchell headed to Maryland and hooked up with his trainer Andre Hunter. As an amateur, he was very popular, sporting a record 9-1 with 9 KO’s. He brought in crowds of 200 to 400 people, and won the novice Golden Gloves.  Turning professional in 2008, Mitchell sent a package to Golden Boy with videos of his amateur fights. They were impressed so much that they sent big-time boxing manager Shelly Finkel to scout Mitchell. Needless to say, Finkel was impressed, and Mitchell was signed to Golden Boy after only one pro-fight.

Fast-Forward 19 fights, Mitchell was 20-0, and has added powerful advisor,  Al Haymon to his team. Usually bigger purses and television dates come with the Al Haymon package. Some may say easier fights as well. Mitchell stated, “The publicity and the purses are better, but you still have to go out and win. I was told if I go out there, win, and impress; then everything else would fall into place.”

Everything seemingly was falling into place as Mitchell won his first HBO televised bout against Timur Ibragimov by TKO. His second fight on the network was just as impressive. Not just because of his TKO over Chazz Witherspoon, but because Witherspoon almost knocked Mitchell out in the first round. Mitchell was very emotional after the fight and he reminisced about it with us. “Wow,” he said. “I almost got stopped in the first round.  I’ve seen fighters that are climbing that ladder, who are a few fights away from where they want to be, and take a big loss.  You don’t see them for four or five fights, and it’s so hard to climb that ladder. A loss is never good but when you’re on that ladder, and you take an L (loss), it sets you back. So at the moment, it hit me all at once, and I was overwhelmed. To be able to whether that storm and come back, I was proud and happy.”

Mitchell was on schedule to return on a July 14th telecast on HBO, but he suffered an injury to his hand in the Witherspoon fight. The injury was a tear to his MCL in his right knuckle that would require no surgery, just rest, and no contact to the right hand. Mitchell is still training and told us that his return is slated for this September. Should Mitchell win that bout and suffer no setbacks, he said, “Three or Four more fights, and I’ll be competing for a world title.” After 3 or 4 more fights, he feels he’ll be ready for the best in the heavyweight division. By the best, he means the Klitschkos. “When I measure myself, the barometer is the Klitschkos, so in three or four fights, not barring any setbacks, I’ll hopefully get my shot.”

Defeating a Klitschko brother has been a daunting task for the rest of the world’s heavyweights. Everyone seems to know the game plan, including Mitchell. It’s just a matter of executing it, which is easier said than done.  “Everyone goes in there with a game plan, but you got to get in there and execute it. You need to be in tip-top shape, use head movement, get on the inside, and attack his body. You have to make it an ugly fight and win on the inside. When I get my opportunity, I’ll do a better job at that,” said Mitchell, on how he would defeat a Klitschko.

With one Klitschko brother closer to retirement (Vitali), and the other getting up there in age (Wladimir), the heavyweight division looks like it has a bright future. With names overseas like Tyson Fury, David Price, and Kubrat Pulev, Mitchell as a fan is impressed and said, “I haven’t really seen much of Pulev but they are tabbing David Price to be the future.  With Tyson Fury, it seems like people are not high on him. I’m not one to talk negative about people, but if he can’t fight, I’ll tell you. I’ve seen him fight three or four times; with his height, he can mix it up with you and make it a tough fight. Those could be great fights down the line for boxing and the heavyweight division.”

A great fight down the line here in the states, would involve Mitchell taking on another up and coming American Heavyweight, Bryant Jennings.  Mitchell likes what he’s seen and said, “Down the road that could be a big fight.” He has been making a name for himself on the NBC Sports Network, winning impressively. Freddie Roach has even tabbed him as the best American heavyweight boxer. In his last outing on the Adamek-Chambers card, he won the fight, but some say he was less than stellar. Mitchell stated, “I think he’s a good fighter. He may have not looked that stellar, but the main thing is to get that W (win), and that’s what he did. He has an awkward style and has a long reach. I like him as a fighter and that could be a great fight that happens down the road.”

While he may not be sure of who he is fighting next, or when he may fight some of those names mentioned above; he is sure of one thing, and that’s his stance on random drug testing. With the recent news of boxers testing positive for banned substances, Mitchell feels it’s only fair and stated, “They could test me year round. It’s a dangerous, brutal, combat sport. Everyone should be on an equal playing field.”  Mitchell also agrees to testing around the board, not just only in the mega fights. “It should be mandatory for all fights, even the smaller fights at the developmental stage. If you’re fighting these development fights, and you get destroyed, or injured; you might not make it to the mega fights, because of something like PEDs. I think if you’re a boxer, you should be willing to get tested any day of the week.”

Mitchell is a humble man that appreciates where he is at this stage of his career. He doesn’t take anything for granted and thanks God for his blessings every day.  However challenge him to something, and his competitive nature comes out.  “People back home will tell you, I’m a humble person but once you challenge me, the beast comes out in me. My wife bet me one semester that she would have a higher GPA than me. Let me tell you, she’s ten times smarter than me. At the end of that semester, my 3.75 GPA blew her 3.25 GPA out of the water, and I made the Dean’s List for the first time. The best way to make me do something is to tell me I can’t,” said Mitchell. Let’s hope someone already told him, he can’t be the Heavyweight Champion of the world.

For full audio of this interview click here: http://www.blogtalkradio.com/thaboxingvoiceradioshow/2012/06/24/seth-mitchell-javier-fortuna-keith-thurman-thaboxingvoice