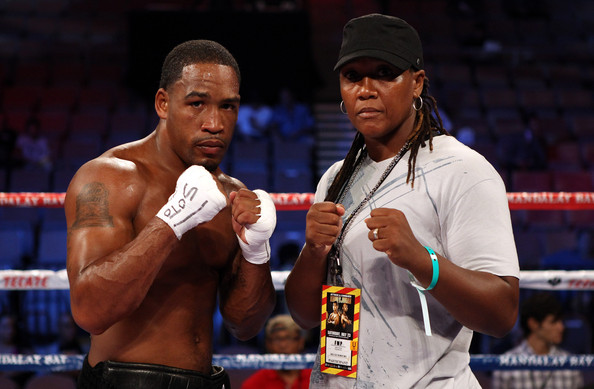 Ann Wolfe is a person I both admire and respect, it’s not just her accomplishments in the ring both as a fighter and trainer but her dedication to kids she helps stay out of the streets. When I asked Ms. Wolfe of any fighters she may be working with she gave me a few names like John Arellano, a young up and coming prospect with 7 wins, 7 knockouts, and 1 defeat. She also trains some amateurs, 1 or 2 other pros besides James Kirkland. She told me “I rather train the kids that aren’t pro to help them stay off the streets” Her love for not wanting to see kids lost to the streets, like so many these days, is what reunited her with her star pupil in James Kirkland.

After agreeing to fight Saul “Canelo” Alvarez on Sept. 15, James Kirkland changed his mind, pulling out of the bout less than 24 hours after it was announced – citing a shoulder injury. A day later, Kirkland revealed he would still be willing to take the fight if he was offered a larger purse. While James shoulder was really hurt, Ms. Wolfe told me Kirkland “[James] just had surgery, I don’t know when he will be back in the gym,” much less a fight I assumed. When I called, she immediately said “I don’t want to talk about James” and I respected her wishes and we began to talk boxing and current events in the sport.

First thing I asked was her thoughts on Andre Ward vs. “Bad” Chad Dawson, “I’m going with Ward, he doesn’t know how to lose yet, nothing against Chad but Ward should win,” said Wolfe.

Of course I asked if she had seen Victor Ortiz vs Josesito Lopez, “I didn’t have a chance to finish watching it but I will say you have to kill me to make me quit, they don’t make fighters like they used too. Now they so fragile or just regular,” said Wolfe.

I switched topics to the evident Saul “Canelo” Alvarez Sweepstakes. I asked her now that James Kirkland is out and Ortiz is out, two names left to be tossed around are Cornelius “K9” Bundrage and Austin “No Doubt” Trout. “I’m sure they’ll go with K9 over Trout, who wants to see Trout? That’s our promoter but they need to put “Canelo” in with some body live, not people with any movement, not smaller, and not old with grey hairs on their balls” said Wolfe. Wolfe added “Ortiz was too small for him [Canelo], why didn’t they fight Kirkland after the Alfredo Angulo fight? James was prime and ready. Instead, he fought Mosley, dude was old.  Why didn’t give us the fight like they promised?”

Since we both felt the same about the Canelo topic, I decided to get her thoughts on Erislandy Lara. I asked her how she felt about Golden Boy giving everyone a shot at “Canelo” except Erislandy Lara, the most feared fighter in the 154 lb pound division. “He ain’t no feared fighter! He’s just an awkward fighter, a south paw who moves. They not scared to make that fight, they scared he will be running the whole fight. Lara vs Canelo, Lara wins but no one would want to see it. Lara has a good coach in Ronnie Shields. The thing with Lara you don’t know which one you going to get, the one vs. Williams or the vs Molina.” Molina was a common opponent for both so I asked about Kirkland’s recent performance against Molina. “Lara or Kirkland at 100% would tear that ass up. Kirkland was at 50% cause his shoulder was messed up, the thing about Molina is they look at him and think they going to steam roll him. They look at Molina and don’t train as hard. They think he has no power, so they come into the fight not a 100%,” said Wolfe.

A Kirkland vs. Alvarez match certainly has potential for fireworks something all boxing fans were excited for and will still be once Kirkland is fully recovered. Golden Boy Promotions has both fighters so it’s a fight that can easily be made down the line. At this point, the lead candidate has to be IBF junior middleweight champ, Cornelius “K9” Bundrage, who is likely to defeat Cory Spinks this Saturday in a mandatory defense of his belt.

The Saul “Canelo” Alvarez Sweepstakes continues, with names such as Austin Trout and Gabriel Rosado. Both would make for a decent challenge but Trout might make it ugly and Rosado’s name hasn’t been mentioned by Golden Boy as a possible opponent. The name that never gets mentioned for Canelo is Cuban standout, Erislandy Lara, who is fighting on the Bundrage-Spinks undercard this Saturday. The well-skilled southpaw would be a tremendous challenge for Alvarez at this stage of his career and might bring to the table too much risk for too little reward, as he has neither the fan base nor drawing power. Both Ms. Wolfe and I pick him to win. In the mean time Ann Wolfe will continue to work with her small stable of fighters, continue to mentor kids, and giving them the right direction; as she did Kirkland by advising him to not take the fight until he’s 100%.