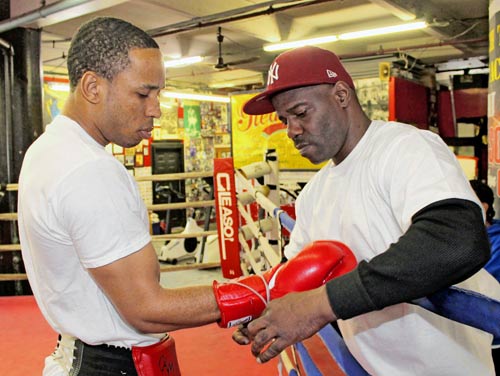 On Thursday night, February 27th at the Millennium Theater, Dmitry Salita’s Star of David Promotions will present a special night of boxing that will be highlighted by a n eight round cruiserweight bout betweenSteve Bujaj and Elvin Sanchez.
One of the featured undercard bouts will pit undefeated Jr. Middleweight Shawn Cameron against Ibrihim Shabazz (2-2-1) in a fight scheduled for six rounds.
Cameron of Brooklyn has a perfect mark of 6-0 with 4 knockouts and will be fighting in support of Wounded Warrior Project® (WWP).
The organization hits close to home as Cameron served two tours of duty for the United States Army and was in Iraq in 2003.
The vision  vision of WWP is to raise awareness and enlist the public’s aid for the needs of severely injured service members; to help severely injured service members aid and assist each other; to provide unique, direct programs and services to meet their needs.
“I did two tours back to back when I was 18 years-old,”said Cameron.  “I thank god that I came back 100% healthy both mentally and Physically.”
“People do not understand what these men and woman go through and it took for my best friend to get killed and for a lot of my friends to get injured and then it hit me that I have a chance to help these people.  Besides the physical injuries there is mental trauma.  I recently got involved with the Wounded Warrior Project .  It is the least I can do.”
“A lot of these guys come home and just feel lost, physically incapable of doing simple tasks due to injury. I could go on for days, these guys just need all the support they can get and the wounded warrior project is definitely doing a good job helping them
“By me fighting it raises awareness and hopefully I can help a lot.  Sometimes these heroes need moral support more than anything financial.  If it wasn’t for the military, I wouldn’t be boxing.  One day in the desert, we were boxing and that led to me competing in some smoker tournaments in Korea.”
When Cameron got back home he took up boxing and had a short amateur career but in that time he won the 2008 Golden Gloves tournament and was a semi-finalist in 2008 and 2010.  He was a 2009 Metro finalist and a 2010 national PAL quarter-finalist at 152 pounds.
In an eight round lightweight co-feature, Michal Chudecki (8-0-1, 3 KO’s) of Poznan, Poland takes on Edward Valdez (12-10-2, 9 KO’s) of New York.
In six round bouts:
Steve Martinez (13-1, 10 KO’s) of New York takes on an opponent to be named in a Jr. middleweight bout.
In a super featherweight bout, Angel Garcia (6-2, 2 KO’s) of Brooklyn, NY battles an opponent to be named.
In a middleweight bout, Akil Aguste (3-1, 3 KO’s) of Brooklyn,  NY battles Donnie Dukes (0-6) of Albany, NY.
In four round bouts:
Peter Reyes (4-0, 2 KO’s) of New York fights Michael Mitchell (2-3-2) of Paterson, NJ in a middleweight bout.
Dimash Niyazov (4-0-2, 3 KO’s) of Staten Island, NY will fight Carlos Nieves (0-5) of Brooklyn, NY in a Jr. welterweight bout.
Marcos Suarez (1-0-1) of Bronx, NY will square off with Jean Hernandez (0-1) of Bronx, NY in a lightweight bout.