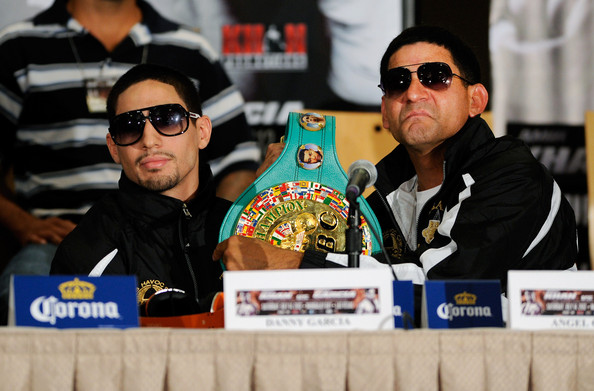 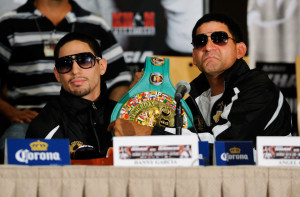 The scene was as typical as any you are likely to see from Angel and Danny Garcia. Danny, holder of the WBA ‘Super,’ WBC and Ring Magazine titles, and recognized by all as the champion at 140 lbs, stood silent with his head tilted downwards as his father/trainer addressed the camera.

Seeing as the topic of discussion was mainly regarding him, you would be mistaken for thinking that IBF Light-Welterweight Champion Lamont Peterson was Danny’s opponent for August 9th, and not the little-known ‘Lightning’ Rod Salka.

Both title-holders have taken much criticism for scheduling bouts against fighters who are barely on the public’s radar instead of one and other. The dreaded ‘marination’ process of building a huge fight is one that is quickly becoming a tiresome spectacle for fans. Just watch every eye in the room roll when you mention Floyd Mayweather Jr. and Manny Pacquiao in the same sentence. The powers that be are depriving fans by doing this and then the fighters take the flack. Something is amiss.

Regardless, Angel Garcia was happy to share his thoughts on Peterson when asked how his style would match up against his son’s: “He basically stands in front of you. He just wants to prove a point and wants to stand and slug for twelve rounds. That’s the perfect style for Danny because he’s a puncher.”
Maybe so, but it depends on whether Peterson himself regards Danny as a puncher or not. Angel referred to Peterson’s fight with one of Danny’s former victims Lucas Matthysse, saying he thought Peterson “psyched himself out” thinking about the Argentine’s long list of knockouts. He did appear timid against Matthysse, but compare that outing with his most recent where he defended against Dierry Jean. He was as slippery as an eel that night, and if he were to do the same against Danny then it could be a very long night indeed.

Angel only had one thing to say about Saturday’s actual opponent when he looked to turn the conversation in a different direction, “I’m not going to take anything from Peterson because he has to fight himself. Let me worry about Salka right now.” It would have been more convincing if he didn’t garnish the comment with a smile and a wink.