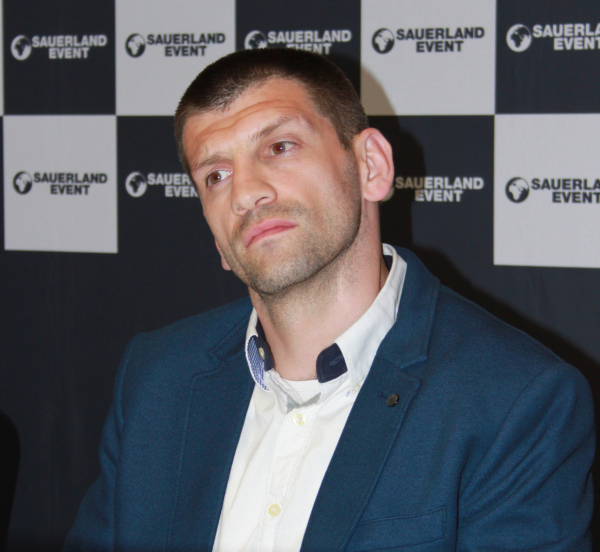 Ahead of his world title challenge against WBO Super Middleweight World Champion Arthur Abraham on May 3, Nikola Sjekloca took a time out from his training to discuss his chances at the Velodrom in Berlin Germany. Here’s what he had to say…

Nikola, please give us your opinion on the fighter that is Arthur Abraham…

Nikola Sjekloca: He was a real champion with a big heart – I repeat: He was! As a middleweight, he made it to the top of the division and was a world-class operator. However, those days are long gone. Abraham is not quite as strong at the limit of 168 pounds.

…and you think you are better than he is at super middleweight?

Nikola Sjekloca: Yes, I do! I am taller and my hand speed is better than his is. On top of all this, my ring skills are just superior to Abraham’s.

You are a quite confident, Nikola – although, you have never won a world title. In your biggest fight to date, you lost to current WBC Champion Sakio Bika in a world title eliminator…

Nikola Sjekloca: That was a great experience. Because of this fight, I know that I am able to beat Abraham come May 3. Until having fought Bika, I did not know what I am capable of and this lack of knowledge cost me the win back then. Now I am pretty sure: I have the potential to be a world champion!

Were you impressed by Abraham’s performance as he recaptured the WBO Belt from Robert Stieglitz back in March?

Nikola Sjekloca: No, not really. He just made his game plan work for the whole twelve rounds as Stieglitz made some tactical mistakes from round nine on, which cost him the fight. So in my opinion, Abraham just profited from Stieglitz lapses.

What will be your key to victory?

Nikola Sjekloca: I will not give you any specifics on my tactics. The only thing I can tell you is that I am close to the camp of Floyd Mayweather. Their instructions in addition to hard workouts with my coach Milivoje Basic are the perfect package to become a world champion.

Is there any other reason to believe that you will leave the Velodrom with a win?

Nikola Sjekloca: I have never lost to an Armenian-born boxer. I knocked out two of them while being an amateur. In 2011, I fought in Germany for the first time and beat former world title challenger Khoren Gevor decisively on points. Abraham will be number four on my list. My dream will come true!

Tickets for the fight night at the Velodrom in Berlin, Germany are available via www.eventim.de.