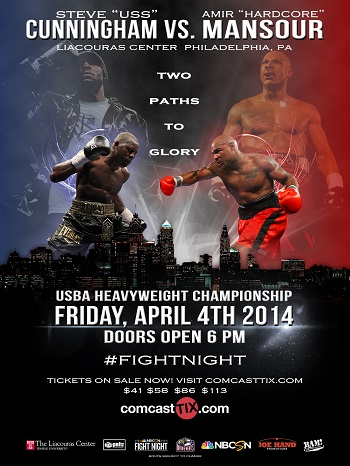 Philadelphia, PA: Steve “USS” Cunningham (26-6-0, 12 KOs) has more motivation than ever to defeat Amir “Hardcore” Mansour (20-0-0, 15 KOs) on Friday, April 4th at the Liacouras Center in Philadelphia, PA and live on NBCSN Fight Night. Cunningham said, “This isn’t about a belt or about winning, this time I need this for my family. I need to make money. I have to get a new house for my daughter’s condition. I am fighting for another pay day and to keep going. ”
His opponent did not fight professionally for over nine years while he served time in Schuylkill Federal Correctional Institution in Minersville, PA for drug possession, though he spent any free time training and honing his boxing skills behind bars. Steve took a very different path to get here. He learned to box while serving in the United States Navy but he believes both men are equally as hungry, “I know Mansour speaks about how hungry he is and how his time in prison made him so, but I don’t have time to waste either. I am fighting for something much more important.”
The two men sparred together when Mansour was first released from prison. Cunningham said, “I have worked with him on one fight. It was a good learning experience for me. He was much stronger and much hungrier. He is older but very powerful. Those years in prison kept him young. I have seen him fight numerous times. He is pretty good but I believe Steve Cunningham beats Mansour. It won’t be easy. I think he makes for a rough fight. I can get gritty and grimy with him; if I need to be I will.”
Mansour was emotional when he reflected on their sparring sessions, “When I got home in 2010, Steve was the first person I saw. He was fighting a southpaw and needed a sparring partner. I was so happy that I performed well with a world champion after an eight and half year layoff that I was literally crying.”
Cunningham’s strategy for this fight is simple, “My strategy is to be me, but the best version of me with added things. With Adamek I should have won but some people said I could have stepped it up a bit. Well this time I am going to step it up a lot. If I can stop him, I will. Opposition brings out the best in me.”
The 37 year old heavyweight will compete in front of his hometown crowd for the first time since March 29, 2003 when he defeated Demetrius Jenkins in an eight round unanimous decision victory at the historic Spectrum. Cunningham promises to put on a show for his hometown crowd, “This will be the best Steve Cunningham the world has ever seen.”
Main Events CEO, Kathy Duva, said, “Both Cunningham and Mansour, though very different, have very compelling stories with fighting styles to match. It’s also a fight that belongs in Philadelphia, which adds another dimension to what is sure to be a battle in the ring.”

The event features a ten-round bout for the USBA Heavyweight Title between Steve “USS” Cunningham and USBA champion Amir “Hardcore” Mansour live on NBCSN Fight Night from the Liacouras Center in Philadelphia, PA. The Fight Night broadcast will begin at 10 pm ET/7 pm PT. The card is presented by Main Events and Peltz Boxing in association with BAM Boxing and Joe Hand Promotions. The undercard will include a ten round middleweight match-up between Curtis “Showtime” Stevens and Tureano Johnson. The remaining undercard fights will be announced shortly. Tickets are on sale now at www.comcastTix.com and the Liacouras Center Box Office.
NBC Sports Live Extra: