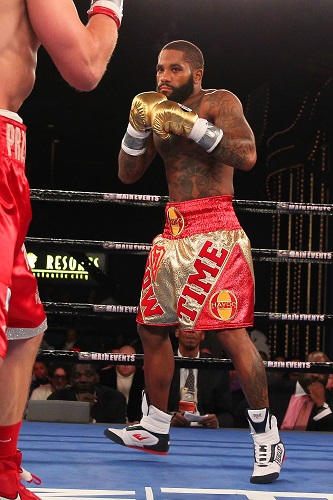 Philadelphia, PA: Curtis “Showtime” Stevens took a relaxing vacation after his first round knockout of Patrick “The Machine” Majewski on January 24 at Resorts in Atlantic City, NJ and now he is faster, stronger, rested and ready to take on Tureano Johnson Friday, April 4 at the Liacouras Center in Philadelphia, PA. Stevens, who vowed to stay busy this year, spent two weeks in Mexico and Jamaica following his fight at Resorts. However, even while he was having fun in the sun, he stayed in constant contact with Main Events’ Matchmaker Jolene Mizzone, “While I was away Jolene kept in contact with me. She asked me if I wanted to fight and I told her I was off for two years so now I want to get right back into it. I wasn’t playing around.”

Stevens, 29, just moved to a new place on the water in Queens and has been running stairs and on the beach as part of his new conditioning regime. He said, “I feel good. I have been training very hard. We wanted to make my legs stronger so I can get lower and weave his shots.” However, Curtis does not think Tureano Johnson is going to be a problem for him. When asked about Johnson he said, “This guy likes to fight. He slaps a lot. He’s got looping shots. But don’t leave your seat when the TV lights come on because you might miss it. Don’t blink. Have your popcorn and your soda ready beforehand because I am about to put on a spectacular showcase come April 4.”

When asked about fighting in Philadelphia, the Brooklyn native said, “Philly is the boxing capital so I am really excited to be fighting there. They like to fight in Philly and I love that. I have a lot of fans in Philly. I grew up with Karl ‘Dynamite’ Dargan, we were in the amateurs together, so I know all of his family. A lot of my fans from New York and Brooklyn are going to come out there and make the drive to show their support but I have fans in Philly too.”
This will be Showtime’s fifth Fight Night appearance and he is undefeated on the program (first round KO of Patrick Majewski on Jan. 24, first round KO of Saul Roman on August 3, 2013, eighth round UD over Derrick Findley on April 20, 2013 and first round KO of Elvin Ayala on January 19, 2013). When asked about fighting on Fight Night, Stevens replied, “I love NBC Sports. I love NBC because the world gets to see me. I am grateful to them for giving me the opportunity to perform for the whole world. Me and Cunningham were on Fight Night together when he fought Tyson Fury and I beat Derrick Findley so I am glad we get to share the spotlight again on Fight Night April 4.”

Main Events’ CEO Kathy Duva said, “I love Curtis’ attitude. There are few things better for a promoter than a fighter who will fight anyone, anywhere, anytime. Curtis has the heart of a champion, even if he doesn’t have that belt just yet.”

Jolene Mizzone, Main Events’ matchmaker said, “Fighting an up-and-coming undefeated opponent is always dangerous for a fighter so Curtis needs to be on point in order for him to get closer to a world title fight.”

The event features a ten-round bout for the USBA Heavyweight Title between Steve “USS” Cunningham and USBA champion Amir “Hardcore” Mansour live on NBCSN Fight Night from the Liacouras Center in Philadelphia, PA. The Fight Night broadcast will begin at 10 pm ET/7 pm PT. The card is presented by Main Events and Peltz Boxing in association with BAM Boxing and Joe Hand Promotions. The undercard will include a ten round middleweight match-up between Curtis “Showtime” Stevens and Tureano Johnson. The remaining undercard fights will be announced shortly. Tickets are on sale now at www.comcastTix.com and the Liacouras Center Box Office.
NBC Sports Live Extra:

NBC Sports Group’s live streaming product for desktops, mobile devices, and tablets – will live stream Fight Night at 10 pm ET/7 pm PT on April 4th.
Coverage will be streamed via “TV Everywhere,” the media industry’s effort to make quality content available to MVPD customers both in and out of the home and on multiple platforms.

All NBC Sports Network live events live stream to PCs, mobile devices and tablets through NBC Sports Live Extra, and to the digital platforms of participating cable, satellite, and telco services, via “TV Everywhere,” which is available on an authenticated basis to subscribers of participating MVPDs.