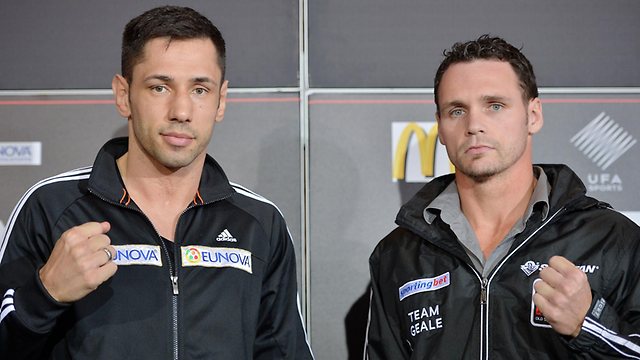 This weekend two intriguing clashes will alter the landscape of the middleweight division. While much of the media attention has been focussed on hard hitting Kazak Gennady Golovkin defending his WBA regular belt against unorthodox Polish stylist Grzegorz Proksa, the most significant fight of the weekend will be a unification battle between WBA Super champion Felix Sturm (37-2-2, 16 KO’s) and the Australian IBF king Daniel Geale (27-1, 15 KO’s) at the Koenig Pilsener Arena, Germany.

Sturm, a three time middleweight titlist, who has held alphabet belts for the best part of decade, is a massive draw in his native Germany, yet has never made the transition to global super star. In 2004, Sturm made his one and only defence out with Europe when he put his WBO strap on the line against Oscar De La Hoya at MGM Grand in Las Vegas.

Many believe the German won the fight, yet it was the “Golden Boy” who had his arm raised at the end of the bout. Rather than pursuing a second chance at stardom against Felix Trinidad or Bernard Hopkins, Sturm opted to campaign almost exclusively in Germanybarring one fight in Croatia.

Since capturing the WBA belt against Javier Castillejo in 2007, the German has made 12 defences against supposedly weaker opposition guaranteeing a steady income by selling out arenas in his home country without the risk of being on the wrong end of a hometown decision once again. While this method has allowed him to become a long term titlist, it also results in him having little profile outside of Europe. This is confirmed by the fact that no U.S broadcaster has opted to televise this unification bout.

At 33-years-old the signs of decline are there, close fought contests against Brits Mathew Macklin and Martin Murray saw Sturm as the beneficiary of dubious judging as he claimed a win and a draw over them respectively.

The Geale fight presents the best opportunity for the German to cement his legacy without travelling abroad by becoming a unified champion for the first time in his career.

Daniel Geale is the man looking to derail Sturm’s plans. The 31-year-old Australian is accustomed to upsetting the odds in Germany as he claimed the IBF strap from Sebastian Sylvester in a unanimous decision. Since that night, the Tasmanian has made two defences against solid opposition, but in Sturm he will face his toughest test to date.

Geale is a high work-rate, high volume puncher, who will look to keep a tight guard to negate the German’s pin-point accurate jab and let his hands go on the inside in the hope of out working Sturm. The Australian is technically sound in comparison to Macklin and Murray but it remains to be seen if he has the power to keep the WBA champ at bay.

Sturm will attempt to establish his jab, one of the most potent in the world of boxing, from the first bell and systematically wear Geale down, keeping him on the outside at all times to avoid a toe-to-toe war.

Verdict: With neither man possessing that killer blow to end the contest early, Sturm will likely pick up a unanimous decision if he deserves to or not.