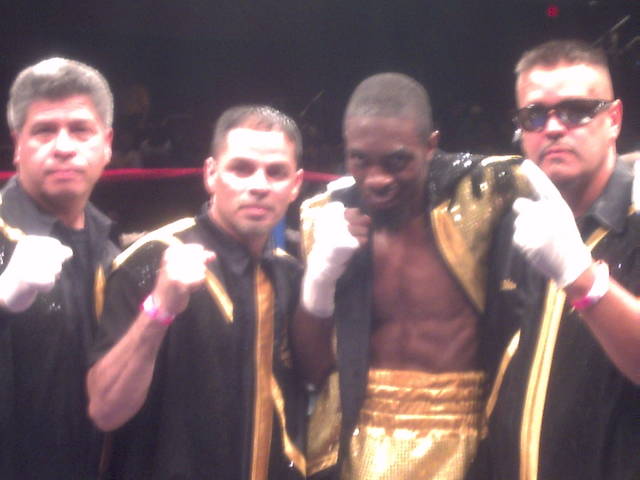 There was an exciting fight card on Friday, June 1, 2012.  The enticing occasion took place at the Tropicana Casino & Resort in Atlantic City New Jersey.  The sanctioned bouts were promoted by Mrs. Diane Lee Fischer-Cristiano, better known as Dee Lee Promotions.  Mrs. Fischer-Cristiano was elegantly dressed in a stylish silk white gown with her notable long red hair stood out as the classy female promoter that she is.  Dee Lee comes from the hometown of Vineland New Jersey where she grew up with a lot of heart, hard work and strength that it took to make it in her blue collar home town.   She learned these characteristics and the love of boxing from her mentor and father Jack Trevethan.  Dee Lee’s father had her hook, line and sinker on the sport of boxing at an early age and implanted the most important lesson of her life “a person can do whatever she wants to do”.

In honor of her father’s hard work and dedication you will see hanging at every one of her shows her collective mark-logo banner “MY DADDY’S DREAM”.  Diane has been convoluted in every aspect of the boxing business, from negotiating contracts to creating bout sheets and for about a year she has carried an extra supply of spit buckets to every event.  Similar to most modern day promoters, she is in the gym as much as most of the boxers which gives her a well- connected basis with the fighters as she talks to them on a first name basis.  I can tell you first hand, she is an extremely sweet lady and easy to talk to, but when it comes to her fighter’s; she is very enthusiastic to say the least.

Dee Lee has many boxing accomplishments, in 1998 she promoted the first fight card in New Jersey to feature 6 world title bouts on the same card, she is the first and only woman ever to be chosen New Jersey promoter of the year by the Atlantic City Press, she was also the first woman to promote an all-woman fight card in the state of Louisiana, the first woman to promote a world title fight in the county of Panama and first promoter to ever promote a title fight in the state of Delaware.  Dee Lee has put on over 45 shows from 1997 up to the current date of 2012.  One of Dee Lee’s known title bouts that she promoted was Ray Mercer vs. Wladimir Klitschko, which took place at the Trump Taj Mahal in Atlantic City which was on HBO on June 29, 2003.

There were 6 scheduled bouts for the Summer Super Brawl.   The first bout was scheduled for 4 rounds in the Junior Feather Weight Division, Joshua Reyes vs. David Rodriquez.  Reyes fighting out of Millville, New Jersey weighed in at 123 lbs. with a record of 1-0-0, 0 ko’s.  David Rodriquez, his opponent fighting out of Philadelphia, Pennsylvania weighed in at 119 lbs. with a record of 0-1-0, 0 ko’s.  In round 1 Joshua Reyes wasted no time at all jumping on David Rodriquez landing a left jab and straight right hand right on the button which gave Rodriquez a quick seat to the canvas, ending the fight in 0:25 of the first round via TKO, Rodriquez did make it to his feet but his legs were not there and he was not able to continue.

The second bout scheduled for 4 rounds both fighters fought out of the Welter Weight Division making their pro-debut, Saud “Kid Grady” Clark  vs. Flavio Augusto Reyes.  Clark fighting out of Philadelphia, Pennsylvania weighed in at 148 lbs.,  Flavio Augusto Reyes, his opponent fighting out of Maryland, weighed in at the official weight of 147.  Now this bout was kind of reminiscent of bout one.  Kid Grady immediately pounced on Maryland’s Flavio Reyes, quickly landing a huge overhand right on a very dry looking Reyes, Reyes hit the canvas with a thud that I felt at ring side but did manage to get back to his feet by the count of 9.  Once the fight ensued the referee said fight and Kid Grady landed the exact same punch on Reyes, the overhand right, flush to his jaw, sending Reyes face first into the canvas at 0:46 seconds  of round one and this time he was not able to recover and get back to his feet, the referee halted the fight.  Reyes was no doubt punched out.

The third fight, another 4 round attraction in the Super Middle Weight Division, Antowyan Aikens  vs.  Kenneth Schmitz.  Aikens  from Atlantic City, New Jersey,  with a records of 4-0-0, 1 ko, weighed in at 166 lbs.,  Schmitz, his opponent fighting out of Saint Joseph’s, Missouri, with a record of 2-1-0, 1 ko, also weighed in at 166 lbs.  What really caught my eye in this bout was the fact that Aikens reminded me of an orthodox Paul Williams but with a little more muscle, his reach, length and punching style is what gave me the comparison.  He also had a very good work rate and was an accurate volume puncher.   It seemed to  me that Schmitz did not want to engage and throw punches from the opening of round 1, every time he threw his jab or lead right he had combinations coming right back at him.  Aikens wasted no time stealing every round, he was more technically sound, faster and had more power, and looked as a fighter trained and conditioned well, whereas Schmitz’s mouth was open and was tiring by round 2.  Schmitz’s punch output was low but his chin was the only thing he had going for himself, never the less if the fight would have went one more round, I’m sure it would have been stopped.  Aikens won a UD over Schmitz, the score cards read:  40-36, 40-36, 40-35.  I can tell you one thing, I’m definitely keeping my eyes open for Aikens in the future to come.

The fourth fight, also scheduled for a 4 round engagement of 2 big Heavy Weights, Joey “The Polish Thunder” Dawejko vs. Edwin Ranquillo .  Dawejko fighting out of Philadelphia, Pennsylvania with an unbeaten record of 6-0-1, 2 ko’s, weighed in at 239 lbs., Ranquillo, his opponent fighting out of West New York, New Jersey with a record of 2-1-0, 1 ko, weighed in at 229 lbs.  This was a good fan friendly fight, Joey Dawejko has the faster hands but Edwin Ranquillo wasn’t afraid to throw, Dawejko landed more ferocious left hooks to the body and head and big heavy over hand rights that rocked Ranquillo every time they landed.  Ranquillo was there to fight but the problem being “The Polish Thunder “ was there to fight a war.  Ranquillo really didn’t have an answer for Dawejko’s big punches even though he did land a few of his own, but the last 2:11 of round 4 Ranquillo was battered and beaten and finally put to the canvas with a left hook to the body and over hand right to the head, the referee was forced to stop the fight which I though was a good decision.  In my opinion, some will probably say “what’s another minute” while another minute could have been the difference of Ranquillo walking on his own out of the ring or being carried out of the ring.  It only takes a few heavy punches and sometimes you have to save a fighter from himself even if it was only a 4 round fight, and it wasn’t like he had a snowballs chance in the devil’s underwear at winning a decision on the score cards.

The next fight was a 6 round Co-Main event in the Middle Weight Division, Keandre Leatherwood vs. Frankie “The Freight Train” Filippone.  Leatherwood fighting out of Birmingham, Alabama, with a record of 9-1-0,6 ko’s, weighed in at 162 lbs., Filippone, his opponent fighting out of Norfolk, Virginia, with a record of 9-2-0, 2 ko’s, weighed in at 160 lbs. This fight started out pretty slow where as both fighters were feeling each other out, neither wanting to be the first to throw.  As the fight warmed up Filippone had a steady busy pace that seemed to keep coming forward putting pressure on Leatherwood.  Leatherwood landed a lot of clean one two’s right on the button but he wasn’t as consistent as Filippone.  Yes his punches were clean and crisp but Filippone was the volume puncher and in any case his punches were also landing and kept Leatherwood on his toes forcing him to use the ring.  By the end of the fight, the judges scored it a majority draw, which a lot of fans nor myself agreed with, but one thing I am certain of is that neither fighter seemed as if they came to win and finish the fight, it seemed as if they both came in settling for a decision.

The Main Event was scheduled for eight rounds in the Light Heavy Weight Division, Dennis “The Assassin” Hasson vs. George “The Rooster” Armenta.  Hasson fighting out of Philadelphia, Pennsylvania with a perfect record of 13-0-0, 5 ko’s weighed in at 175 lbs.,  and Armenta fighting out of Silverspring, Maryland with a record of 14-8-0, 11 ko’s, weighed in at 173 lbs.  Hasson fought a very solid fight with a style a lot like Andy Lee or a young Kelly Pavlik, he used his left jab well along with his left hook then right cross combinations which he used over and over again, don’t get this twisted, George Armenta was a game fighter whom tried his best to fight on the inside and beat Hasson’s body but the problem was Armenta would walk in without using his jab and very little head movement, therefore taking Hasson’s punishment and combinations all night long.  Armenta does have a very strong chin and every so often he would land some solid shots of his own, never the less a good chin with the same game plan that is not working does not win you fights.  The fight was action packed but Hasson pulled off a unanimous decision and did it in a fashion that makes me want to see what the future has in store for him.  The judge’s score cards had the main event scored as follows:  79-73, 79-73, 78-74 which were appropriate.