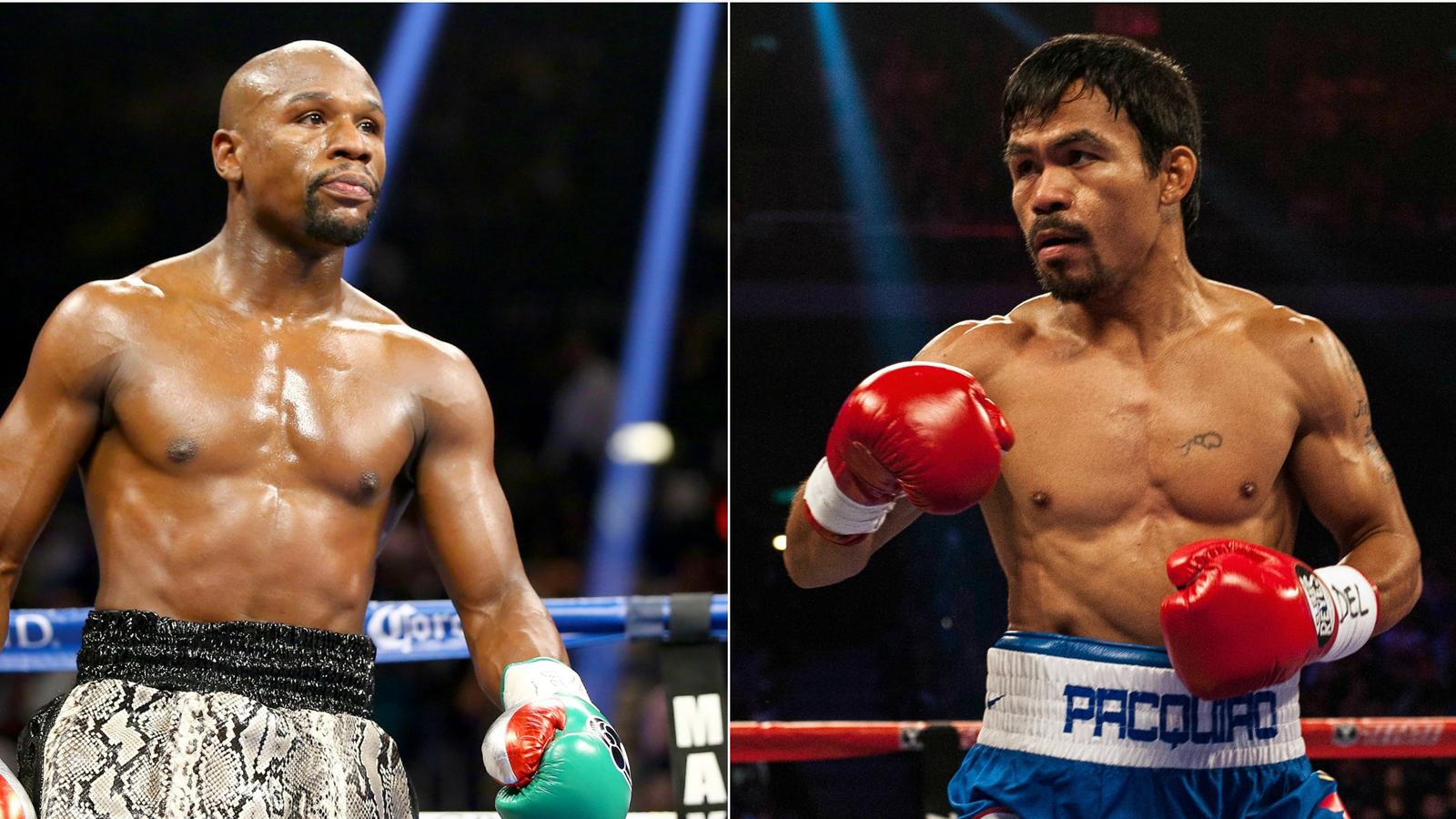 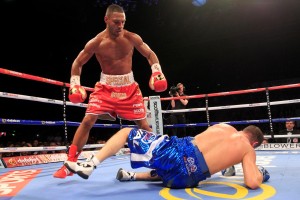 Kell Brook Destroys Jo Jo Dan
Over Sheffield, England on Saturday night Kell Brook took on mandatory challenger Jo Jo Dan and simply destroyed him. I was a little apprehensive about Brook coming off of that terrible machete attack that he suffered, but it turns out there was no need to be.

Brook exerted his power from the jump, and while Dan was game he was not in the same league as Brook, which led to him suffering his first ever defeat by knockout. Immediately Brook called out Khan, and Khan almost immediately found a reason or 10 to duck Brook. Let’s face it. Khan’s chin will not survive Brook and he knows it but if Khan fights anyone besides Thurman or Broner over Brook in May or June it will be a clear sign of him ducking and he will have no leg left to stand on.

As far as Brooks’ next opponent goes I would love to see him and Thurman fight so that there can be a clear cut opponent for Mayweather should he easily beat Pacquiao. If no Thurman then a Marquez, Rios, or even Maidana fight will be ok until he can get a bigger named fighter to accept him.

Mayweather – Pacquiao Update
Mayweather sparring controversy. One report says Floyd is KOed Judah; another report says that Floyd got KOed by Judah, Roach says Floyd is getting beat up by sparring partners and so on. Since Floyd keeps a lock on what really goes on within his gym we will never truly know but you can be pretty sure he has not gotten KOed by anyone and is not having a hard time with anyone. It truly looks like much ado about nothing when you dig into it.

Manny’s got cramps says Freddie Roach. Leg cramps that is. This has been an ongoing problem for a while. Hopefully, he gets them fixed and can be ready to go so there are no excuses come fight night. If not he better pray that Floyd doesn’t move a lot or he will be in some trouble by the middle rounds.

Max Kellerman said Floyd has the best chance of beating Pacquiao this week which is pretty much in line with what he has said from the beginning so at least he is consistent.

Trainer Eddie Mustafa Muhammad said Floyd can beat him up in every round and knock him out. Which is also consistent with what he has said from jump as well. Whether it will happen remains to be seen, however.
Trainer Barry Hunter however said you gotta give Manny a chance. He’s a volume puncher; he loves confrontation. Which seems to be a fair assessment considering Manny is a great fighter he will always have a chance until the final bell rings in any fight.

According to Thaboxingvoices reporter Vic Salazar, “Tecate has won the bidding war to become the official lead beer sponsor for Floyd Mayweather Jr.-Manny Pacquiao’s promotion with the winning bid of $5.6M. They outbid their rival Cerveza Company, Corona by roughly $400,000 with a bid of $5.2 M”.

Sky Sports Box Office was also awarded exclusive rights to air the Mayweather-Pacquiao fight in the UK this past week.
Mario Mungia of ThaBoxingVoice reported that “Major Mexico broadcast networks Azteca and Televisa reached a deal to both buy the rights to broadcast Mayweather-Pacquiao in their respective markets. The deal was for $2.3M total, although there are still some other details that need to be worked out; however the money is set.”

Another undercard bout was added to the big fight, and it involves Chris Pearson versus Said Harrak. Pearson is a TMT fighter and is reaping the benefits of Floyd being the man in charge with his fight being placed on the card. Both fighters are cheap to place on the card and will just be filler material for the main event for sure.

Gary Russell Jr. did what Abner Mares could not, and he beat Jhonny Gonzalez on Saturday night. He actually beat him very easy to tell the truth. The speed difference was a huge factor and Jhonny had no answer for it. Gonzalez’s people claim that the lawsuit that Golden Boy Promotions slapped them with the day before the fight threw off Jhonny’s psyche, but I truly doubt it made a difference.

The KO victory finally gives Gary a big win that he needed after being brought along on a litany of TBD’s before getting thoroughly beaten by Lomachenko in his last fight. Next up seems to be a Mares fight since both are promoted by Al Haymon or maybe even a Leo Santa Cruz showdown if he moves up in weight. Russell says he wants Lomachenko again, but that fight wasn’t nearly competitive enough to warrant a rematch so soon. What I actually would love to see is Gary versus Rigondeaux. That could possibly be the fastest fight in terms of hand speed, ever. If Rigo moves up that fight is truly a 50-50 and would be awesome for the diehards for sure.

Charlo “Gifted” a Decision Over Vanes?

In a fight that was surely a lot closer than the final judges’ score cards, Jermell Charlo received a 10 round unanimous decision victory over Vanes Martirosyan. The 97-93 scorecards pretty much gave the impression that no matter what Vanes did short of getting a KO, he was not going to win. The Charlo twins have long been “destined” it seems as they move closer to title shots with only fighting 1 top 10 fighter (Vanes) within the division between the both of them. While Charlo did get, the win Vanes should have known better than to expect a decision on the scorecards.

At times he was lackadaisical and could have turned it up to win the earlier rounds more clearly to put a little more doubt in the judges eyes but he did not. He may look back on this fight and regret the missed opportunities but hopefully the Charlo’s future opponents won’t take anything for granted.

Neither twin is good enough to get a Mayweather fight (the WBC & true 154lb Champion due to beating Canelo), they won’t fight Lara (WBA champ) because they are stable mates, neither wants any part of Andrade (WBO champ) it seems, so that basically leaves K9 Bundrage (IBF champ) as the only real option for both fighters if they want a title.

If I were K9, I would not chance fighting either one unless I was forced to knowing that he will most likely be down by 6 rounds before the opening bell even sounds.

In a fight that made Danny Garcia versus Rod Salka look like Hearns versus Leonard, Nonito Donaire destroyed William Prado. The way the fight looked I could have sworn that Prado did not throw any punches in the whole fight. I get that Donaire needed to get his confidence back after his KO loss and all, but he could have found a better opponent than Prado. Hell, I have seen heavy bags that put up more of a fight than Prado did. Hopefully the next fight we can see Nonito in with a live body and let him get back to winning against a decent opponent.

The WBC has ordered Adonis Stevenson and Sergey Kovalev to fight thankfully. It is well known that Adonis has been ducking Kovalev for a while, and this may be the only way to make him take the fight. Sergey has all the belts except the WBC, and if the fight actually does come to fruition it will unify the light heavyweight division. If both fighters win their next bouts then negotiations should be underway so we can either get the fight that should have happened a year ago or we can get Stevenson to vacate so Sergey can unify the division on his own.

• Shannon Briggs KOed Zoltan Petranyi in the First Round in Panama in what can only be described as a stay busy fight. The most exciting part of the bout was when Guillermo Jones got into the ring to call out Briggs and give him a dose of his own medicine. Other than that is was a one way drubbing.

• Anthony Joshua is set to face Jason Gavern at the Metro Radio Arena in Newcastle on April 4, live on Sky Sports. I am a little disappointed that he will not be fighting Kevin Johnson as he was originally slated to before the injury but maybe this is just a prelude to that fight actually happening.

• Adrien Broner says, “Business before Friendship” when it comes to fighting friend Danny Garcia. This is an intriguing fight to make and would be entertaining, to say the least. If Danny wins it could propel him to a fight with Mayweather and if Broner wins it will make him the man at 140lbs where he could redeem himself for the beatdown he suffered at the hands of Marcos Maidana.