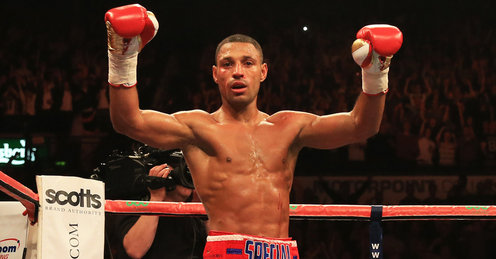 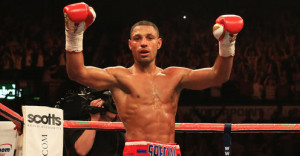 Saturday night Kell Brook won a hard earned decision over Shawn Porter in a decent fight on Showtime. I have picked Kell Brook since before this fight was announced and Kell came through the way I thought he would. However I must admit that I did not pick Brook for what he could do more so than I picked him because of what I saw Porter couldn’t do. Porter was wild and amateurish Saturday night just as always and he made it an ugly fight. Porter continually windmill’s punches and when he gets inside most of his punches are blocked. All a fighter has to do is not go backward and they can mute most of his offense just like Kell did. Brook had more accurate punches and was catching Shawn as he was lunging in time and time again. I truly do not remember a significant punch landed by Porter in the whole fight and after the 6th round he slowed down immensely. Kell never tired and he kept his composure throughout the fight which was very impressive to people who had not seen him fight before. Both Ken and Shawn Porter complained of holding in the fight but if you are honest with yourself you can say that both fighters held a lot. Kell was holding in the beginning and Shawn was holding at the end. It was a rough and ugly fight but I am glad the referees got it right.

Omar gets it Done!

A lot of people were hating on Omar Figueroa but I don’t know why. The guy has a fan friendly style and he fights through adversity. In what was most certainly the fight of the night against Estrada Saturday night he suffered a bad cut but he fought on. The vicious right hand that knocked Estrada down was a thing of beauty but you could see it coming a mile away. All night Omar would throw that same lead right from long distance and tag Estrada so it was only a matter of time until it did massive damage like it did. What Omar Figueroa lacks in defense he makes up in heart and aggressiveness. He says that he is going to move up because of his struggles making weight and that is just better for us as fight fans. He can make some awesome fights at 135-140lbs with the likes of Gamboa, Crawford, Burns, Beltran and a host of others. Either way I will continue to watch him and wish him the best.

In what was kind of a stinker fight Anthony Dirrell beat Sakio Bika in their rematch. Dirrell made sure that he fought all 12 rounds this time and he thoroughly out boxed Bika for the well-earned decision. The 168lb division has some good players in it and I can see him fighting Kessler, Ward, Groves, Chavez or anybody not named Froch. To be honest he just doesn’t have a big enough name for Froch to waste his time on him right now. That’s not a knock on Anthony but it’s just that Froch is coming towards the end of his career and only wants the big fights. Nonetheless it is a good think that Dirrell finally saw his dream come true with all the adversity he has battled through in his life.

Another Fight, Another Wilder KO.

Deontay Wilder earned another KO against Gavern in the pre fights on SHO Extreme on Saturday night. It was easy to see that he was trying to go rounds and not hurt Gavern too much throughout the 5 round affair. Gavern was one of his sparring partners and a friend so it was hard to go all out I would think. Plus he needed some rounds anyway. Gavern was out of shape and ended up retiring after the fifth round to give Wilder the TKO victory. Now Wilder can wait for Stiverne to heal so that he can get a true test.

Across the Pond on Saturday Cruiserweight titlist Yoan Pablo Hernandez took on Firat Arslan in a decent fight. Hernandez is recognized by some as the number one guy at cruiser but he put on a very underwhelming performance that some saw him losing. While I thought he earned the decision I also thought that there is no way he is beating Marco Huck who should be recognized as the best fighter at cruiser. Huck KOed Arslan in his last fight out and he has more than enough skills and power to beat Hernandez. Once Huck makes history by breaking the cruiserweight title defense record he should unify with Hernandez so we can have a true lineal champ at cruiser.

Just like I said last week. As this fight gets closer I am not getting excited like I usually would for the big fights. If anything I am getting de-motivated. It probably has to do with the undercard which is a pile of hot garbage! Leo Santa Cruz is fighting Roman (who the hell that is I don’t know), Angulo is fighting De La Rosa (who the hell that is I don’t know), Bey is fighting Vasquez (decent scrap for regular Showtime) and Molina is fighting Soto (it’s not even on the main card). I am a fan of Mayweather as a boxer but as a promoter he kind of sucks so far. Between him and Haymon (not Paul from the WWE) we are getting some doo-doo cards lately. If I am gonna spend $75 for a PPV (which I am not) I want a full card of good fights. Not fights with fighters I have never heard of. I think the PPV buys will reflect the bad card but since Espinosa says he will not release PPV numbers anymore I guess we will never know.

On Friday night ESPN 2 had a good main event with Shafikov versus Nugaev. Shafikov landed the more powerful punches and pulled off a minor upset with a 9th round TKO to secure a mandatory rematch with Miguel Vasquez for his 135lb title. Hopefully he can bring the same intensity to the rematch and come away with a victory.

It Looks Like Kovalev vs Hopkins is Heading to Atlantic City

The Barclays Center announced Saturday afternoon that the much anticipated Hopkins versus Kovalev matchup will not be able to happen in their arena because of prior commitments. That most likely means that the fight will be heading to Atlantic City. I feel that AC is a better choice anyway since Kovalev has fought their before and it will be closer to Hopkins Philly fans. Hopefully they will announce it soon so fans can get their tickets and travel plans set for the fight (me included).