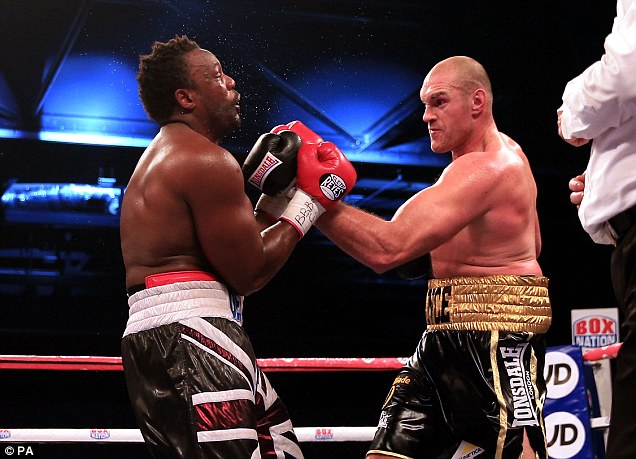 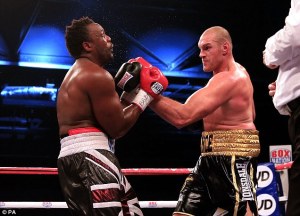 Fury Shows a Different Side

Early Sunday morning in England Tyson Fury took on Derrick Chisora and completely outclassed him in a way we have not seen before. Fury boxed quite nicely, looked fast and more composed than he has possibly ever been seen. Chisora had no answers what so ever and ended up being talked into quitting before the final round. The fight may have not been the knockdown, drag out brawl that most of us were expecting but I did find it quite nice to see Fury show more skills than he has previously shown to include fighting as a southpaw for the majority of the fight. If his chin can hold up I think he may be able to give Wladimir a run for his money considering . Wlad isn’t known for such a great chin either. If nothing else his sheer size will force Wlad to switch things up a bit and will not allow Wlad to lay on him as he does with his other opponents.

Crawford did what he was supposed to do.

On Saturday night in Nebraska, Terrence Crawford took on Ray Beltran in a very lackluster fight that showed just why Ray has been a journeyman his whole career and was better known as Manny Pacquiao’s sparring partner than for his own accolades in the ring. Crawford was supposed to look impressive much like the way Manny did last week versus Algieri and he did, with the exception of the knock downs. I personally found the fight boring and the result was expected because Beltran was too slow and too predictable. I am still not fully sold on Crawford just yet and if he were to fight Manny I would easily take Pacman or anyone with fast hands and power after seeing how easily Gamboa hit and outclassed him before his size advantage kicked in. He is still winning and he will still beat a lot of good fighters but he is not on the level of a JMM, Pacman, Mayweather or even Timothy Bradley just yet.

Provodnikov did what he was supposed to do too.

Ruslan Provodnikov easily beat up Jose Luis Castillo in Russia on Saturday. I didn’t want to see this fight because I knew it was going to be a once proud warrior who was blown up in weight and just in need of a payday and that is exactly what I saw. It was nothing more than a stay busy fight for Ruslan and I am glad it was stopped before Castillo got seriously hurt. Ruslan spoke of fighting Maidana, Matthysse or Garcia and I am down for anyone of those. I think he could beat all 3 possibly and if not he would at least give as good as he got. Nonetheless I just want to see him fight somebody on his level or better and leave the Castillo type fighters alone.

Billy Joe Saunders got deserved decision victory over Chris Eubank Jr. on the undercard of the Fury-Chisora fight card. Saunders easily outboxed Eubank for the first 6 rounds before Eubanks decided to make a fight of it and go all out. Eubank looked as if he was trying to save as much energy as possible for the later rounds and just kept losing all the early rounds while looking for a 1 punch KO that never came. Meanwhile Saunders was out working and nicely boxing from a good range to take those early rounds. The judge who had it for Eubank by 4 rounds needs to be fired. I could see a draw but there was no way Eubanks was 4 rounds better than Saunders. Saunders proved that he was classier in and out of the ring while Eubank showed that his bark was way worse than his bite. So much for his Daddy’s talk of him beating GGG right now I guess. Maybe now Eubank Jr. will go back to the gym and work on being a better fighter and classier person but somehow I highly doubt the latter will happen.