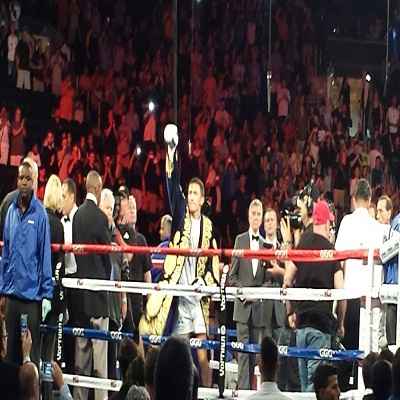 Before the explanation of this fight, I must say, the atmosphere of a “star” was in full effect. The lights dimmed, the replays of his devastating KOs were shown on the big screen, and the WWE-like entrance was made. As Gennedy Golovkin walked through the crowd before going into the ring before entering the ring to face Daniel Geale, it was clear the crowd and the promotions were behind GGG. Anyone who didn’t think GGG attracted a good following needed to see the crowd reaction as he entered to the very loud crowd.

With that being said, let’s move on to the actual boxing event. Round 1 was a mostly quiet round, good action, but no one hurt and no knockdowns. In round 2, Golovkin unleashed a good combination in to put Geale down early in the round. In round 3, Geale had good body movement, made Golovkin miss a lot, but with 30 seconds to go in the round, Geale went down again and when they ref asked him to come towards him, Geale clearly shook his head no. That fast, the fight was over. If this was the biggest test for Golovkin, he passed with flying colors as he made Geale quick at 2:47 of round 3.