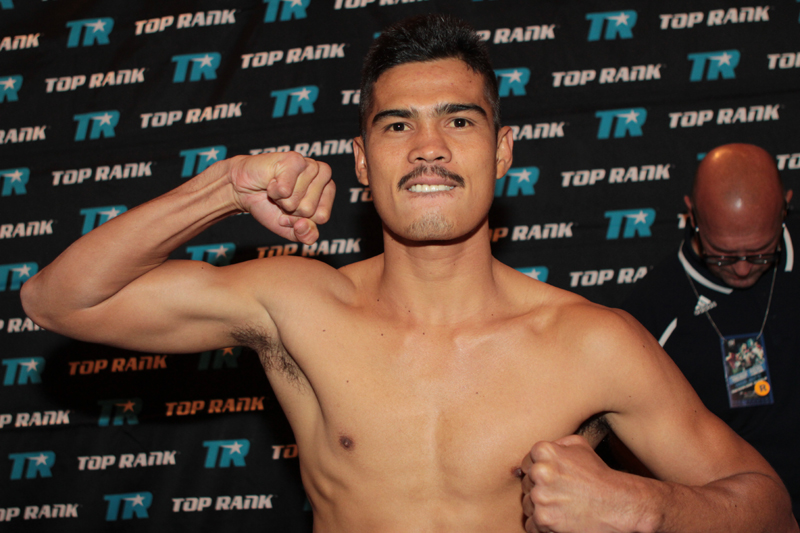 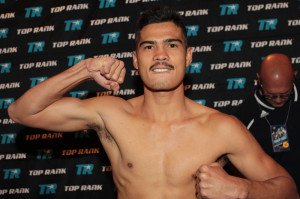 Squarevision Entertainment held its initial show in Pleasanton, CA at the Alameda Fairgrounds on August 2nd. The card was headlined by Drian Francisco getting back to his winning ways by scoring a devastating knockout victory after a year layoff. Francisco, who was coming off a loss to Chris Avalos on ESPN2’s Friday Night Fights, wasted no time destroying the body of Manuel de los Reyes Herrera who seemed that he had lost the fight on the scales the day prior.

Herrera was wearing a garbage bag in the parking lot running laps of the Doubletree hotel the day prior at the weigh in only to still miss weight. Herrera then would shake the hand of Justin Fortune, Francisco’s trainer, when he allowed a nude Herrera to come in at 118.5 and not having to cut the extra half pound, something it appeared Herrera may not have in him.

Francisco showed his power was already brutal at 122 lbs. appears to be just as good at 118 lbs. as Herrera simply looked to survive for as long as possible after getting hit early in the fight. Afterwards, Fortune reflected upon his fighter “…he showed rust early, but did what he had to do.” It was a fateful left hook followed by a right hand that kept Herrera on the mat for the count as the end of the bout came 48 seconds into the 3rd round.

Singleton, who was rumored to have been willing to beat big money (5 figures) prior to this fight looked startled that the fight was not being fought on his terms, from a distance. Moments later, Singleton was down again, Singleton looked able to get up, but at the same time looked like he was trying to convince himself to stand as well. The apprehension caused the referee to step in and stop the bout as Ghvamichava picked up a second round stoppage and should be moving towards a big fight in the not too distant future.

Bilal Mahasin picked up a tough split decision win over Dwain Victorian in a fight that turned ugly. From the onset, Victorian appeared to work a jab to Mahasin’s body who appeared to have had a hard weight cut. Mahasin on the other hand was trying to use physicality and land cleaner punches to disrupt Victorian, the result was a confusing fight as by the third round it appeared Victorian did not want to engage and Mahasin’s body was not reacting idly to cutting off the ring as most would of hoped.

“I knew I might be in trouble judging by my corner.” Mahasin said afterwards as he headed into the fifth round. The fifth round was by far Mahasin’s most dominant round as he rocked Victorian badly with a right uppercut that appeared to detach Victorian from his sense as he clinched for the last 20 seconds of the round. As we headed into the final stanza, it came down to the activity , but more so slapping punches of Victorian or the cleaner punches of Mahasin that came with less volume. On this occasion, Mahasin picked up a tough win over a game former Golden Gloves champion and a stern test upon his resume that is filled with tough fights to date.

Wilkins Santiago earned a majority decision win over Luis Alfredo Lugo, but not without trouble. Santiago won the first three rounds easily, but appeared to fade as the fight went on whether it was Lugo’s body work or conditioning was unknown. Santiago even began to experiment with switching stances something he explained later was because Lugo hit his arm and gave him a charlie horse. The final two rounds saw Santiago’s corner frustrated looking despondent hoping for the best.

An old adage in boxing is it is better to win ugly then to lose and Santiago picked up an ugly win, but nonetheless a win. Santiago is hoping to return in October with no set card as of this time.

One of the most likable crowd favorites in the bay area, Ryan “The Rhino” Bourland put on an onslaught on Ray Mesa who was making his debut. Bourland swarmed Mesa for the two rounds the fight lasted as Mesa appeared to tear his bicep after Bourland landed a devastating body shot. Bourland already has two fights lined up for both August and September is trying to put together a healthy run for Northern California prospect of the year as the recently signed to Herb Stone, manager of the stars in the bay area. Bourland is an all action fan friendly fighter who never leaves the fans feeling cheated and packs a house as well as a hell of a punch.

Moises Benitez went to war with Percy Peterson in a four round fight that had the building shaking as Peterson caught Benitez in the first round and floored the favorite Benitez making his pro debut. Peterson then appeared to punch himself out and make the rest of the fight much harder for himself. The second round was very close and could of gone either way with both fighters having moments, but Benitez appearing to get the better as the round ended. By the third round, Benitez appeared settled as he began to use his jab to set up his offense and began to put a lot of pressure on Peterson who was noticeably fatigued. In the end, Benitez edged out a close decision in a great fight.

In the opening bout of the card, Tony Thompson made short work of Khrys Daniel who was floored by a liver shot that was partially blocked, but landed enough for Daniel to want no more. Thompson, who was originally set to fight the Kennel Boxing Gym’s Mauricio Zavaleta hopefully, will get to revisit that match up in the future as that could be an all action affair.

Aaron Coley and Adam Fiel were pulled off the card 24 hours prior as their opponent were not cleared by the California State Athletic Commission and were pulled from the card.