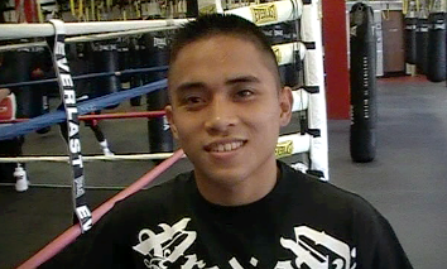 As many boxing pundits have written about Bruno Escalante will hit the main stage of the Fox Theatre on February 28th at approximately 8:00 facing Lorenzo Trejo, but before that happens let’s look at some of the other fighters on the card who you should be getting to know emerging out of Northern California.

Light welterweight Jonathan Chicas has long been heralded to be one of the best prospects that may never quite live up to his potential. Chicas who in December of 2012 lost to the tough Moris Rodriguez rebounded nicely in 2013 and though he still trains out of the 3rd St. Boxing Gym in San Francisco, Chicas has taken his strength and conditioning trainer over to Undisputed Boxing Gym to work with Michael Bazzel. The change occurred prior to his debut on English language television on the opening bout of Golden Boy Live on Fox Sports 1 in October in which Chicas pitched a shutout against his foe winning every round of a tactical decision.

An old adage of boxing is that a change in a camp is seen in the next camp after the switch and Chicas proved this adage very true. Chicas facing Rodolfo Armenta, a power puncher who in many ways resembled Moris Rodriguez. Chicas annihilated Armenta in the first round as his first straight right and left hook combination seemed to separate Armenta from his consciousness. Chicas showed the crispest punches of his career as well as the most power of his career. For the man who has sparred with champions such as Shawn Porter and Amir Khan, Chicas is now looking to cement his own legacy and after his last outing I believe he is well on his way.

Tony Johnson didn’t necessarily see himself as a boxer when he began his voyage into combat sports; in fact Johnson was a member of the famed American Kickboxing Academy fight team, one of the most famous MMA teams in the world. AKA known for fighters such as UFC Heavyweight Champ Cain Velasquez, Daniel Cormier, Jon Fitch and Josh Thomson to name a few. Johnson started as a kickboxer and then transitioned to MMA fighting in the now defunct organization, Strikeforce, but didn’t find his true calling into lacing up the gloves in sport of boxing.

“I just didn’t like the ground game” Johnson said two weeks ago at an autograph signing when reflecting on his time prior to his professional boxing career. Johnson though still holds one of the most impressive honors in the bay area as he is the lone man to solve the Joe Gumina puzzle, a top prospect who seemingly knockouts anyone in front of him. What makes the win even more impressive is the fact that Johnson took the fight on short notice.

Last December, Johnson returned to the ring after two shoulder surgeries as well as a weight cut that Johnson simply explained was “very tough” against one of the toughest fighters a prospect could face Alfredo Contreras, whom is half fighter half zombie. Contreras is known for being a prospect killer since he brings pure pressure and seemingly can absorb an un-human amount of punishment. For Johnson, who had only had one fight prior to his two year layoff due to shoulder surgery, the performance was not his best work, but was happy with the win nonetheless. Johnson is now returning once again at Super Middleweight and feels that this upcoming fight will show new aspects to his game as he hopes to have an active 2014.

Middleweight Ricardo Pinell has been probably my favorite fighter out of the Bay Area for the past year. Pinell, who had roughly 30 amateur fights doesn’t fight like it what so ever, calm, cool and composed is Pinell’s modus operandi. Pinell, who in his last two fights has struggled with weight and may have even suffered his lone career loss last year due to weight cut as he was knocked out by Erik Mendez early in the fight with a punch Pinell usually can absorb,. For Pinell, the scale is the first of two battles, because now people are wondering if he can make the weight.

Pinell, a slick counter puncher is unique for the reason that unlike most counter punchers Pinell tends to knockout his foes. In fact Pinell has only gone to a decision once and it was against a very tough Nathaniel Richardson, who had fight only one time, that one fight, in his pro career. Pinell for a prospect has also fought tough opposition facing multiple fighters with winning records early on in his career. Pinell in many ways is a throwback fighter and his eagerness to fight is one of the things that reminds me of a boxer from the 1950s trapped in the present era.

I will always remember the words of Pinell after knocking out his foe in December. “Right now, I am mad – I should have had another fight by now, so I am really pissed about that knockout.” Pinell said in reference to his loss to Mendez. It was less about his win and more about what he didn’t do in the past, something that many say define a champion, I expect a lot out of Ricardo Pinell and I think that people should start to watch for Pinell starting now.

Jesus Sandoval might just be the most crowd pleasing fighter in the bay area. When Sandoval hits the ring; chances are the cheers may not get any louder that night. The Gladiator Boxing Gym product based out of Redwood City is looking to change a habit he got into a lot last year, draws. Sandoval, who may entertain everyone around may need to think about situational fighting in order to pick up a few wins as a few fights Sandoval should have won have turned into draws due to his eagerness to trade with his opponent.

Sandoval like Pinell has been in against tough guys early on, Sandoval has faced such fighters like Sacramento, CA top prospect Alberto Torres and tough guy Christian Silva. Sandoval loves to bang and loves to exchange, he knows one way and it is bring the fight to his foe. Sandoval is a guy who will always entertain, but sometimes we have to wonder is his style built for the long run and does he longevity in the sport with the style him embodies up until this point?

Darwin Price has a lot of stuff going on leading into this fight, two weeks out from his fight the St Louis, Missouri based fighter left the Sam Garcia camp to head home. Price, who has two children and recently got married, may be feeling pressure that all young men feel at that age about life in general. It was odd seeing Paul Mendez though on Golden Boy Live on Fox Sports 1 and not see Darwin Price walkout with him, and even more bizarre the puzzled reactions to the Garcia camp as to Price’s status. This is not the first time this has happened as Price’s cousin, Preston Freeman, left two weeks out from a fight. Freeman tragically was shot and killed in St. Louis in front of a nightclub days before his fight last March.

Price, who sparred Maidana leading up to the Adrien Broner is a boxer-puncher who seemingly has the world at his hands. The bigger storyline is less so about Darwin’s in ring ability which the track star turned boxer shows a ton of especially with a well-seasoned jab that he uses often. The bigger question now is where is Price at mentally and who will be in his corner? I am assuming that the Garcia camp will be there yet rumors of Price working with Kevin Cunningham have circulated as well for future camps. It is a weird moment where the biggest storyline of the fight is less about the fight itself and more so the fighter. I hope that this was merely a case of being homesick and nothing more than that and that on February 28th it will be nothing more than business as usual for the talent, Darwin Price.

We also have two fighters with ties to the world famous Kennel Boxing Gym out of San Leandro, CA in Andrew Tinae and Mauricio Zavaleta. Zavaleta made an impressive debut last summer against Ryan Chaney in his debut as he brutally stopped him in the third round. Tinae will be making his long awaited pro debut as the amateur standout looks to bring his accolades into the ring with him.

For more information about this card, please visit PacoPresentsBoxing.com where you can find tickets available still ranging from $40, $50 and $60 as well as available on www.FoxRWC.com.