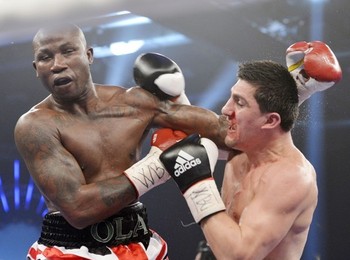 A decision has been made. Sauerland Event has been awarded the right to host the hotly anticipated fight Marco Huck vs. Ola Afolabi III. Originally Don King won the purse bid for the WBO Cruiserweight World Championship on February 26 by offering 1.5 Million US-Dollars. However, the 81-year-old wasn’t able to clear the necessary details within a set period of time and couldn’t find a TV-Partner to broadcast the fight. Therefore, the World Boxing Organization handed the right to the second highest bidder, Sauerland Event, who made a bid of 914.000 US-Dollars. “We always said that the bid was a bit over the top. It was a fantasy bid, wishful thinking. Now that everybody else has come to the same realization we can start the planning process,” said Sauerland Event Managing Director Chris Meyer. “We have just extended the deal with WBO Champion Marco Huck. Over the coming days we will sit down with Tom Loeffler (K2 Promotions), who is looking after Ola Afolabi, and will talk about a date and possible venues. We want Huck vs. Afolabi III to take place before the summer break.”