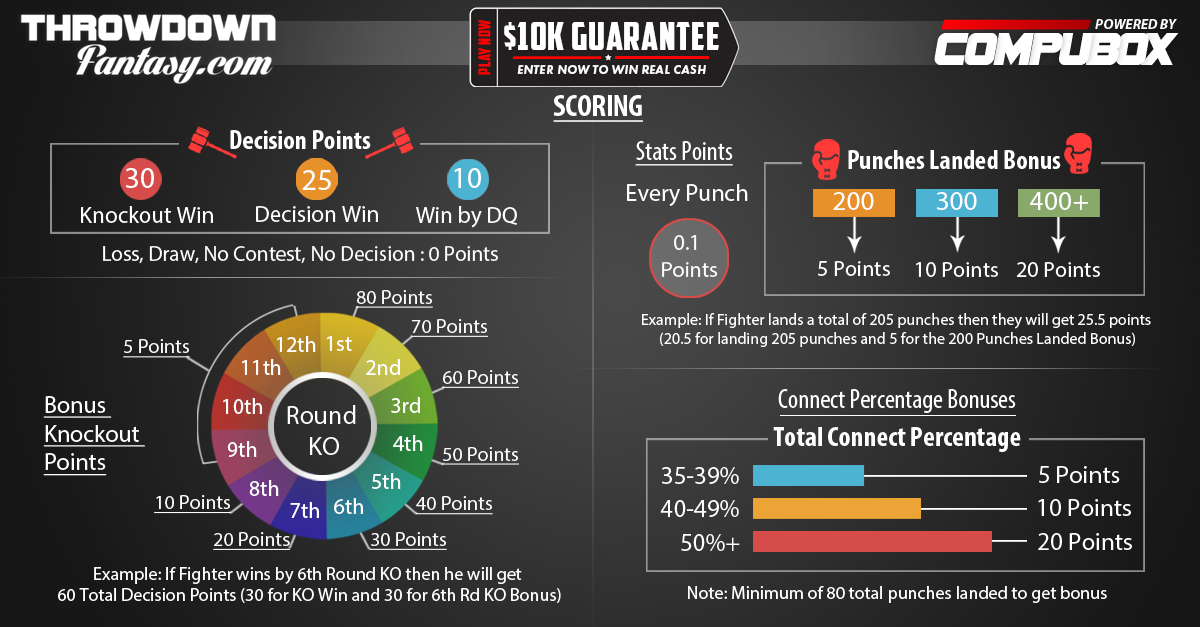 The next group of games sees two weeks of action packed fights. The featured fights are James DeGale vs. Andre Dirrell, fighting 5/23 on NBC, and Amir Khan vs. Chris Algieri, fighting 5/29 on Spike TV. Let’s take a look at all the matchups.

Need help with scoring? Here’s a look at the scoring breakdown for fantasy boxing at ThrowdownFantasy.com 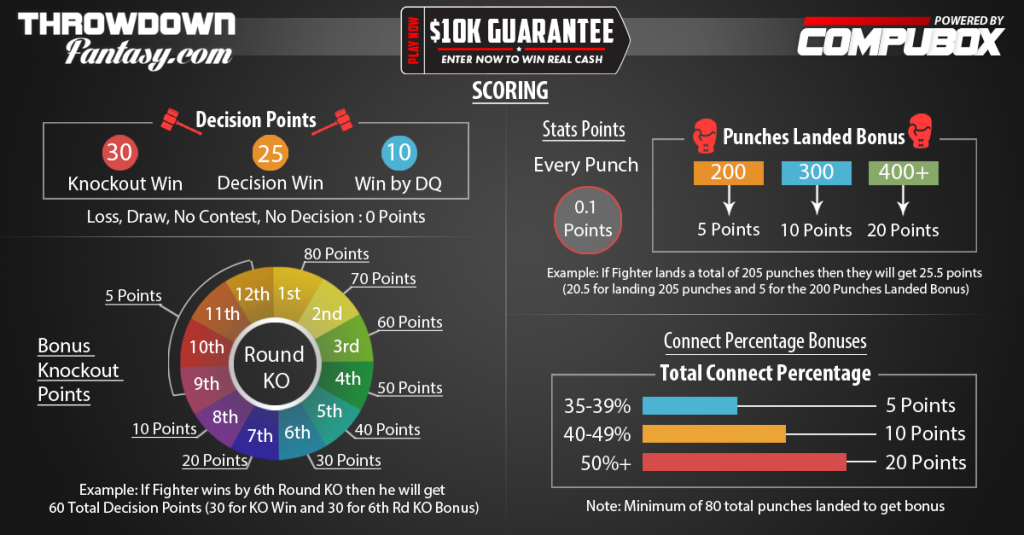 Brandon Adams ($4,700) vs. John Thompson ($4,700)
For Adams to win he must cut off the ring, work his way inside the long arms of the 6-foot-1 Thompson and stay there through busy combinations as well as jolting, compact punches. The longer he stays in the trenches the better. For Thompson to win he must move, fire consistent jabs and incorporate combinations off his jab. Every inch of space between the pair is vital for Thompson to succeed. The uppercut will work well against the shorter man but it must be thrown judiciously and tightly to avoid exposing the chin that led to his only loss (TKO 2 vs. Frank Galarza).

Our suggestion: A true pick-em fight. Adams has the Boxcino experience and was considered the pre-tournament favorite but Thompson, a late sub into the tournament, has shown very well in springing a pair of upsets. The guess here: Adams fell to Willie Monroe’s wiles last year and Thompson, at his best, could exhibit similar skills. 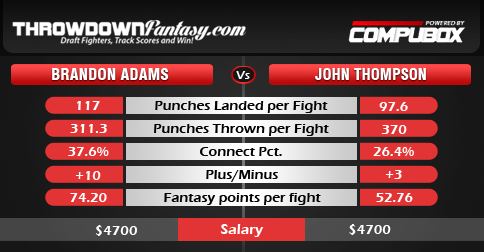 Donovan Dennis ($4,700) vs. Andrey Fedosov ($4,800)
For Dennis to win he must use his height and reach to set up the massive southpaw left crosses that produced knockouts of Steve Vukosa and Razvan Cojanu in his other Boxcino fights. If he can crank up volume, do so because that’s a big reason for Bryant Jennings success. Fedosov also tends to leave his right hand low as well as start deliberately so piling up points early on will earn Dennis a solid foothold. His chin can also be reached with lefty power, for Lenroy Thomas scored a first-round knockdown thanks to a left cross to the jaw. Of course, Fedosov rebounded with his own knockdown — and knockout — in round two so he needs to be mindful of the Russian’s clout. For Fedosov to win the huge right hand he owns will be key against the southpaw but he needs to set it up with “throw-away” punches that will distract Dennis’ attention. Mixing in hooks to the body proved effective in setting up the KO against Thomas, so it would be a good idea to incorporate them here, especially since he’s the shorter man. As is the case with most lefties, the jab won’t be a big factor so all Fedosov needs to do is be mindful of the left, which was powerful enough to flatten the 31-pounds-heavier Cojanu last time out.

Our suggestion: This could be the most explosive fight on the board as both have proven one-punch heavyweight power. It depends on what you like — Dennis’ southpaw cross or Fedosov’s hammering right. Fedosov is priced slightly higher due to his experience and better results against a higher grade of opponents, but Dennis is about as live as an underdog could be. 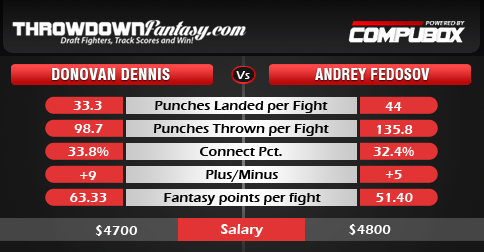 May 23
At Boston (NBC and NBC Sports Net)

James DeGale ($4,700) vs. Andre Dirrell ($5,100)
For Dirrell to win he must establish his long-range game with his flashing jab and superior mobility while firing occasional combinations. Lots of boxing mixed with timely slugging will be key, as well the mature mindset and execution he demonstrated against Derek Edwards in his last fight. For DeGale to win he must assert himself early as he did in his last two fights against Brandon Gonzalez and Marco Antonio Periban and not fall into his previous pattern of trying to figure opponents out early before striking. He is fighting away from home and an early lead is key. Also, his overhand lefts and right hooks will be vital, especially when Dirrell turns lefty.

Our suggestions: DeGale may be worth a chunk of your money given his underdog status and the fact that he has shown his best form in his last two fights against Brandon Gonzales and Marco Antonio Periban. But Dirrell is fighting in his native land, has shown maturity and has plenty of speed and tricks at his disposal. 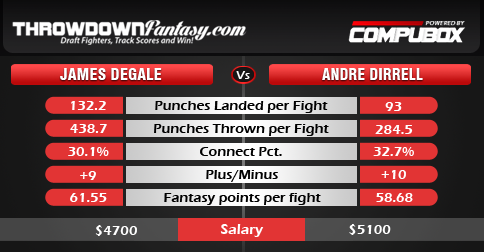 Edwin Rodriguez ($5,000) vs. Craig Baker ($4,700)
For Rodriguez to win he must first shake off the rust that must have accumulated with only one round of action since last October. Once he does, he should crank up his usual high volume to overwhelm Baker’s defenses and make sure to include plenty of body shots and overhand rights, two areas of which Baker has shown vulnerability. For Baker to win he must keep his distance by using his legs early, then look for openings to land the sudden, out-of-the-blue overhand rights that surprised Humberto Savigne last time out. Baker is also an excellent body puncher, especially for someone as tall as he is, so he should make sure to include those. Finally, he must slow the pace to a more comfortable level or else he could be overrun.

Our suggestion: Win or lose, Rodriguez puts up numbers — both in terms of volume and percentages — and that’s why he’s priced where he’s priced. Baker, who is coming off a huge upset win, may be feeling his oats and he doesn’t care much about being the underdog. Can he continue to ride the wave? If you think he can, he may be worth the risk, but the guess here is probably not. 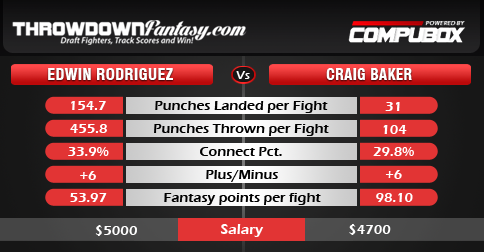 Amir Khan ($5,700) vs. Chris Algieri ($4,100)
For Khan to win he should do everything Algieri does well — fight at long range, fire long and accurate jabs and produce good volume — but do it at the higher level that he occupies. After he does that, land his power shots with precision and superior impact. He can also afford to take a few more chances because Algieri’s fists do not produce great power in comparison to his peers. For Algieri to win he must out-hustle Khan in terms of volume and use angles to force Khan to reset instead of planting his feet and delivering his power. In-and-out movement, semi-circular movement and timely flurries that build points will be imperative.

Our Suggestion: This perpetual candidate for a Mayweather fight will again be motivated to turn in an excellent performance and since he is facing one of the few fighters who isn’t a mortal threat to his chin he’ll likely take even more risks — and probably score more points. 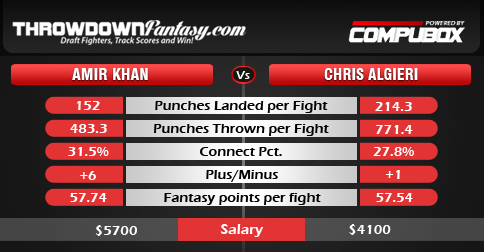 Bryan Vasquez ($5,000) vs. Javier Fortuna ($4,700)
For Vasquez to win he must use his typical in-and-out, side-to-side movement in all directions to prevent the power-punching Fortuna from planting his feet and delivering hard blows. He also must put together his peppery, unpredictable and point-scoring combinations to build a lead on the scorecards as well as frustrate the Dominican. Finally, Vasquez must work on Fortuna’s eyes, which were cut and swollen in recent fights. For Fortuna to win he must take the lead, pound the ribs to drain Vasquez’s legs and counteract Vasquez’s volume with sharpness and power.

Our suggestion: If he has his way strategically, Vasquez will be a massive headache for the hard-hitting Dominican because of his mobility and ring generalship. But Fortuna could be a good underdog buy because he has power, he’s left-handed and he’s still unbeaten. 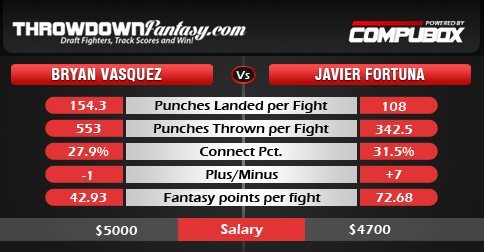 Kell Brook ($5,600) vs. Frankie Gavin ($4,400)
For Brook to win he must continue the roll he began against Jo Jo Dan, who, like Gavin, is a southpaw. Brook took the fight to Dan, imposed his superior power and never let Dan get into his rhythm. As is often the case with right-handers against lefties, the straight right and the arcing hook will be key. For Gavin to win he must shed some of his counter-punching nature and try to back Brook up while maintaining a responsible defense. Straight lefts down the middle and accurate body shots would work well but he also needs to score enough connects to make up for his power deficit.

Our Suggestion: Brook’s fabulous performance against Dan has increased his value, both in terms of career path and in fantasy rating. Brook showed against Dan that he is surging toward his positive peak as a fighter and against Gavin, a good domestic fighter but a peg or two below him in terms of ability, Brook is expected to shine. 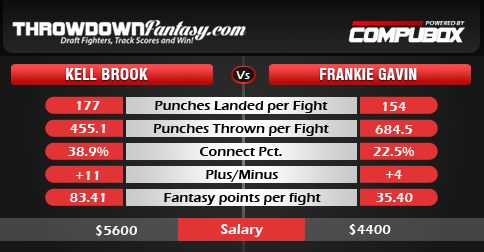 Jorge Linares ($5,000) vs. Kevin Mitchell ($4,500)
For Linares to win he should try to use his busy jab to force Mitchell to retreat, for the Briton doesn’t perform nearly as well when backing up. Once the jab is established, he should introduce his heavy-handed combinations, excellent hand speed, polished technique and superb accuracy to the mix. For Mitchell to win he must be the man moving forward, but not be wildly aggressive in doing so. He must fight much like he did in his last fight against Daniel Estrada — use intelligent aggression to set up pinpoint counters, then retreat only to avoid counters. He also must work on Linares’ sensitive scar tissue and fight hard enough throughout to put Linares’ stamina issues into play. Finally, give the home crowd a big reason to carry him sonically.

Our Suggestion: Linares is a sharp puncher with excellent technique and he’s used to competing away from home. His best points will result from his accuracy gaps rather than big raw numbers. For those willing to invest in Mitchell, Linares’ past issues provide justification. That said, being overly reliant on intangibles is a dangerous — and imprudent — approach. 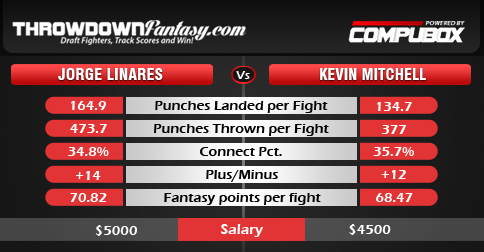 Evgeny Gradovich ($5,700) vs. Lee Selby ($4,600)
For Gradovich to win, he must do what he always does: Move forward, throw tons of punches and do the same thing from round one until round 12 if necessary. Body punching also will be vital because Selby will be on the move constantly. Also, he must push Selby to his limits — and beyond — because domestic critics say Selby only does just enough to win and nothing more. For Selby to win he must report in supreme shape, for against Viorel Simion, a volume puncher like Gradovich, he appeared to wilt in the later rounds and Gradovich is remorseless when he senses his opponent is exhausted. He also must use his height, reach and mobility to score plenty of points against the reachable Gradovich, who sacrifices defense for offense. Finally, he must feed off the feverish hometown crowd but he must give them reasons to cheer for him.

Our suggestion: Gradovich is a perfect fantasy fighter — tons of punches, tons of connects and very few knockouts. He probably will be heavily favored but Selby’s movement could cut down his numbers, at least early. Selby will enjoy a significant hometown advantage and he is capable of winning if the wear-and-tear on Gradovich begins to show. He can win, but he won’t dominate stats because of the way Gradovich operates. 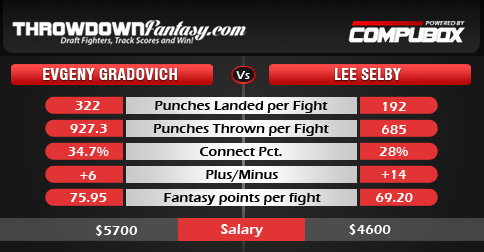