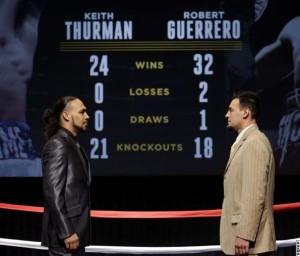 Thurman and Guerrero have been verbally sparring with each other since the last summer. Guerrero’s team was making ludicrous demands of Thurman before considering fighting him (at one point they insisted he jump up a weight class to beat Erislandy Lara). Thurman responded by claiming they were in no position to make such demands and concluded that they were ducking him.

Whether time heals all wounds, or he is just happy to get a big time fight on broadcast television, when asked about the ducking accusations by Gibbs on Wednesday. Thurman ended up doing the heavy lifting for Guerrero and chose to spread the blame around. 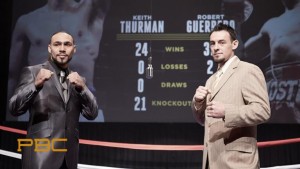 The theme of this conference call was more or less a positive one. Whether it is because both Thurman and Guerrero are just happy to be on the debut of “PBC on NBC” or they are on their best behavior at Al Haymon’s request, remains to be seen.

There was a brief moment after Nestor reminded Thurman of his claim that the fight with Leonard Bundu was the closest he would come to a Floyd Mayweather type of fight, where Guerrero seemed to break from the script:

Guerrero replied, “… about the last guy he fought (Bundu), being like Floyd Mayweather… Similar styles? That guy was the slowest on his feet ever. Mayweather is fast, I’ve been in their with him, he is fast. On his feet and with his hands, that guy (Bundu) was no comparison at all.”

Thurman quickly reiterated: “It was [Bundu’s] accomplishments, not his style it was just his accomplishments… being an Olympian and being undefeated.”

Guerrero quickly dismissed using these comparisons as “Laughable” and that was it… both fighters were back to the “being prepared for anything” and “PBC is a great opportunity” rhetoric.

It will be interesting moving forward to see how fighters promote their PBC fights in comparison to their usual approach. Will they retain the freedom to be themselves and create fireworks during the lead-up?

Or will they have to watch what they say, in the same way, the NFL and NBA players do in the name of “protecting the brand”? For now, we can only speculate because the fighters did not provide much more than a reassurance that they will be prepared and are looking forward to the opportunity.