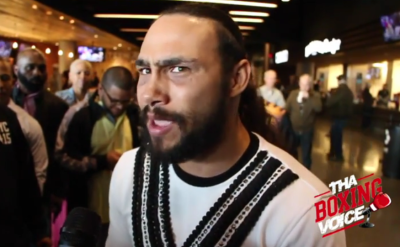 Nester Gibbs of ThaBoxingVoice.com had a few moments with Keith “One Time” Thurman to discuss his plans for the rest of the year. He was also able to get him particularly fired up about Amir Khan and his status as a top 10 welterweight.

Hot on the heels of a big win on PBC’s premier episode on NBC, Keith Thurman started off by saying all the right things as he talked about his plans for the rest of the year.

“We’re gonna do our best to make a real nice fight for you guys some time over this summer and then we’re gonna bring another one later on this year.”

After a 2014 that the history books will consider a “down year” for Haymon fighters, Thurman’s comment is further confirmation that the PBC brand and relative television deals will demand more activity from Haymon’s top guys than we have seen in the past. Not that Thurman wasn’t active, but three fights a year for a Top 5 welterweight, has not been the norm in recent years. The future looks bright for us fight fans.

Speaking of “Top 5” welterweights, Thurman had quite a bit to say about Amir Khan’s undeserved status as a top welterweight in the division. Ring Magazine currently has Amir Khan ranked at #3, which is two spots above Keith Thurman. When Thurman was asked about Amir’s tendency to make junior welterweights come up to 147 to fight him, Thurman damn near lost his mind about it.

“Oh yeah, man. Once again, Amir Khan is the number one most overrated welterweight in the welterweight division. All day every day. You a chump. I thought Mayweather was a cherry picker, boy but you picked some cherries aight!?”

Keith Thurman was frothing about the situation. So much, so that even fellow Haymon guy Floyd Mayweather Jr. got caught in the crossfire. Thurman wasn’t even close to being finished with Khan. He continued with his tirade and questioned Khan’s resume’ to be considered a top 10 welterweight.

“He fought Devin Alexander. 140 pounder at 147. Now he wants to fight Chris Algieri. Another lightweight… Somebody that don’t got any experience that us other real welterweights that been in the top 10 got. He’s not even fighting a top 10 fighter and Ring Magazine wants to put him above me!? Man get that shit outta here.”

That was when it became clear that Nes struck a nerve in his questioning of Thurman about Khan. He is clearly offended by Ring Magazine’s current rankings. From Thurman’s perspective, Khan has not yet proved himself up at 147 and the undefeated Thurman has to look up at him? I never gave it much thought, but I don’t think it sits well with me either.

Keith Thurman still had a few more bullets left in the chamber, so he continued.

“I’ma be real, man. Amir Khan ain’t ready for Keith ‘One Time’ Thurman. Cuz if he was ready, we would do it tomorrow, son! I’m here, baby! Come get it! You and Virgil Hunter, son! Yeah, my trainer knows your trainer! We Know each other very well, so let’s go do it! Man you soft, boy!”

And with that, Thurman walked away. The message was clear. If Khan wants to prove he deserves his status as a top 5 welterweight, he’s going to have to start fighting a few legitimate 147 pounders soon. Keith Thurman would love to give him the opportunity!