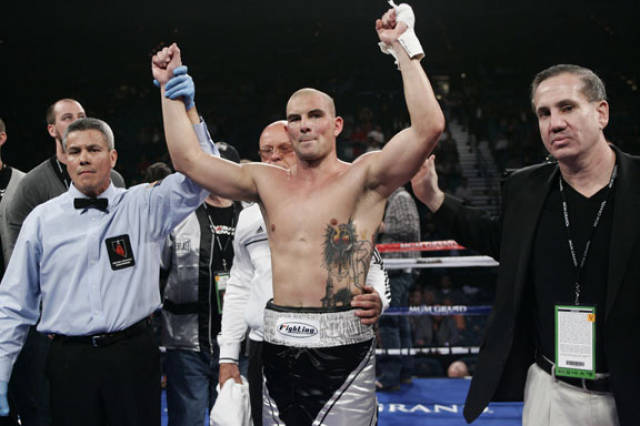 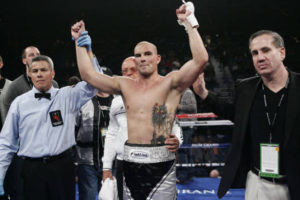 HAMMOND, Ind. — You can pretty much call Tom Zbikowski a former everything.

Former Notre Dame Irish football player. Former NFL player for the Baltimore Ravens and Indianapolis Colts. Former alcoholic. And yes, even a former boxer — until one month ago, when he returned to the ring with after a five-year layoff to defeat Keith Jackson via four-round decision.

Zbikowski’s tale of perseverance and redemption had another chapter penned on Saturday. The 31-year-old cruiserweight scored a first-round knockout against journeyman Albert Harkins at the Horseshoe Hammond Casino.

A series of right hands along with one big left hook badly hurt Harkins just moments into the first round. He crashed to the canvas and was in no condition to beat the count, let alone continue.

The official result was a knockout win for Zbikowski at the 35-second mark of round one. The win moved Zbikowski’s record to 2-0 since coming back, and 6-0 with four knockouts overall.

Harkins (1-13, 1 KO) deserves tons of credit for stepping in and taking the fight on just a couple days’ notice, but the difference in class between the two fighters was evident from the opening bell. Harkins turtle shelled up once he felt Zbikowski’s power, and Zbikowski was happy to oblige him by unloading power shots until the job was finished.

Here’s footage of the knockout, courtesy of the Hitz Boxing Facebook page:

Since Zbikowski already fought in April and May, expect him to stay active — especially considering he took no punishment last night — and return to the ring soon. While he’ll need 10-15 more wins before he approaches contender status, with his athletic pedigree, it’s not out of the realm of possibility for him to become relevant in the cruiserweight division down the road. Plus, he’s still young by pro boxing standards.

And what if Tom Zbikowski never makes serious noise in the cruiserweight division? It will matter little; he’s already a champion outside of the ring.

Zbikowski conquered his issues with alcohol, and now plies his trade as a public servant when he isn’t in the gym. He proudly serves the Chicago area as a firefighter. Belt or no belt, that’s a champion.