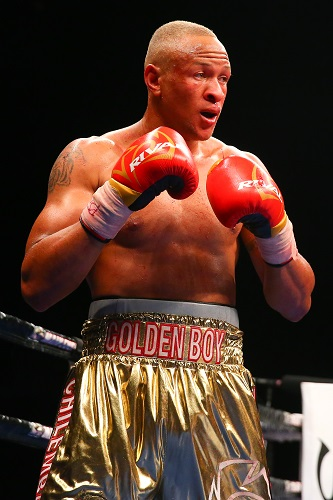 Burbank, CA: Issac “Golden Boy” Chilemba (22-2-2, 9 KOs) has made the long journey from South Africa to Burbank, CA to reunite with his trainer Buddy McGirt as the two prepare to face Cory “Black Ice” Cummings (17-6-1, 13 KOs) on August 2 at Revel Casino Hotel in Atlantic City, NJ in the non-televised co-feature of the Sergey Kovalev vs. Blake Caparello WBO Light Heavyweight Championship card. Chilemba is ready for this fight, “It is going to be a good fight. This a good chance for my career so I am coming and I am coming big. I am confident and I am quite sure I am going to win the fight. This is me and I will be here for a long time.”
Chilemba, 27, is originally from Blantyre, Malawi, one of the poorest countries in the world, and now resides in Johannesburg, Gauteng, South Africa. He started his professional career in 2005 at only 18 years old. His professional career began with eight straight victories, six of which were knockouts. Now, nine years later, he has only two defeats on his professional record and is rapidly rising through the ranks of the hot light heavyweight division. In Isaac’s most recent fight he defeated Denis Grachev via unanimous decision in a bloody ten-round battle at Sands Resort Casino in Bethlehem, PA on March 15th.
As “Golden Boy” prepares to take on “Black Ice,” he once again has former WBC Welterweight and IBF Light Welterweight World Champion Buddy McGirt in his corner. The two are preparing to face Cummings at the Powerhouse Gym in Burbank, CA. McGirt had this to say about Isaac’s camp thus far, “We are just working on a few little things Isaac needs to do to make himself better. We are just going step-by-step. I feel like Main Events is doing the right thing by him and keeping him busy. He needs to keep his toes sharpened.”
The time difference between South Africa and California took a little getting used to for Chilemba but according to McGirt, “Adjusting to the time difference is really getting to him but he is getting better. Isaac will be ready, he came to camp already in shape. Isaac needs to be away from home for training camp because if he isn’t he will overwork himself. Back home when he spars he dominates everybody. When he comes to the gyms in America everyone wants a piece of him, so his sparring is much more competitive here.” According to Isaac’s manager, Jodi Solomon, “Training camp is going very well and Isaac’s sparring is going well. Isaac is training hard and is as disciplined and focused on winning as he always is.”
Tweet