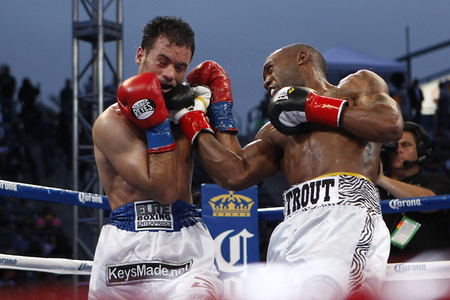 According to a report on BoxingsScene.com, the Devon Alexander-Randall Bailey fight has a new date and home. The bout is said to be on the move to San Antonio, Texas on Saturday September 22nd. While the people involved with the promotion couldn’t confirm definitively that the bout has been move, another proposed bout involving Austin Trout looks likely to be added to the card against IBF Champion Cornelius “K9” Bundrage.

Trout is coming off a victory over Delvin Rodriguez and is the WBA Jr. Middleweight Regular champion. Over the last two months, he was said to be in the running to face Mexican Superstar and WBC Jr. Middleweight champion, Saul “El Canelo” Alvarez. However, the hope was trounced after Golden Boy choose Victor Ortiz and then went ahead and picked Ortiz’ conqueror Josesito Lopez. That left Trout without a fight. However, in recent developments it seems that a unification bout is nearly complete with Trout saying, “The fight with me and K9 is so close to being made that it’s on the one yard line.”

Bundrage, who is coming off a drubbing of mandatory challenger Cory Spinks last month was also in the running for a fight with Alvarez, but he however was looked over for Lopez as well. When Bundrage was a guest on ThaBoxingVoice.com’s radio show he said, “Let these young guys fight each other. I been there done that, so no I’m not fighting Trout, Kirkland, Rosado, Or Lara. I’m especially not fighting a southpaw with no name.” Bundrage said he would go overseas if he didn’t land a big name like a Cotto, Mayweather, or Alvarez. Bundrage was not available for comment.

However, according to Trout, this fight is close to being done with a backup partner possible. The backup name mentioned is none other than Texas power puncher, James Kirkland. Kirkland was the first named mentioned for Canelo, however he backed out claiming injury, then claiming money issues. Kirkland had injured his shoulder in his March fight with Carlos Molina and his timetable for return was slated for October. Most people thought it would be too soon for him to return for the date with Canelo On September 15, but apparently he may be available for the next week should Bundrage turn down the fight. It would make geographical sense to have Kirkland on the card.

The bout with Trout and ‘K9’, should it be finalized would be televised on Showtime as a triple headed card with Bailey-Alexander as the main event, along with another undercard bout between Jr. Welterweights Lucas Matthysse and Ajose Olusegun. Golden Boy and Showtime seem to continue the trend of multiple bouts on their telecasts with the September 22nd card taking shape.