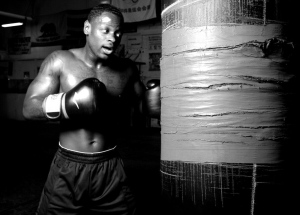 During the “Camp Life” feature on ThaBoxingVoice YouTube channel Troy King (2-0 2KOs) explained that he was going to get bring the smoke to his opponent. A week prior to the fight King offered choice words for his foe, “He can’t stay, he gotta get the [expletive] out of here!” King said when asked if his opponent had to go on September 26th.

King, who works with Eddie Croft out of Virgil Hunter’s Gym sees the pro game as natural fit for himself. “I used the amateur game to get ready for the pro game, I wanted to feel real comfortable when I got to the pros and get used to the bright lights.” That experience in the amateurs paid off as Troy King displayed a knockout of the year as he flatlined Obert Gastelum, the video of which can be viewed on ThaBoxingVoice YouTube channel.

“I am kind of sick of talking about it, you know, smoke, that’s all I can say. The house was on fire and he got caught in there and couldn’t get out.” King said as he explained the knockout. King who compares his power to smoke used the metaphor as he carried it over to explain the depth of the fight. “He was in garage with the car running and forgot to let garage door up, carbon monoxide poisoning, same [expletive].”

King hinted that he has options to fight in California soon, very soon hinting it could come as soon as November. It appears it could be between a date in Fresno, CA or the November 8th card in San Francisco headlined by Karim Mayfield. King had alluded to the possibility of being on this card earlier this month as well as Mayfield is in the background of the interview making an audible “Yee!” as King comments on the potential of being featured on the aforementioned card.

“Nah, it [doesn’t] matter if [you run] I’ll come get you, take you out on a date and if you come to me I’ll put you down. I mean doesn’t matter, you got to be able to adapt, it’s about making an adjustment.” King is one of the most interesting up and coming prospects as he is already capturing the attention of people via a series of YouTube videos