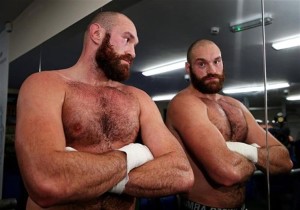 Wilder outboxed Bermane Stiverne for 12 rounds in Las Vegas on Saturday night and, in doing so, became America’s first world heavyweight champion since 2006. Fury, who boxes Christian Hammer on February 28 at London’s O2 Arena, couldn’t have been happier with how it all worked out.

“It was big man versus little man and the big man boxed tall, just as I did against Dereck Chisora,” he said. “He outboxed the smaller man with ease.

“Wilder did a good job on Stiverne and he’s now got the WBC title. That puts him in line for big fights against people like me, Wladimir Klitschko and whoever else. America has a new heavyweight champion of the world and the big boys are back in the division. The division has been set on fire again.

“It was definitely the result I wanted. Stiverne, although a good champion, was a bit of an unknown. Nobody knew who he was and nobody cared. Now America has a new heavyweight champion. Also, Wilder’s undefeated and a knockout artist. That means the division has been given a lift and we’re all back in business.”

A fight between Wilder and Fury seems something of an inevitability given their respective ages, career trajectories and exuberant personalities. And, with world titles now up for grabs, it appears even more of a certainty in 2015.

“I don’t like Deontay Wilder and he doesn’t like me,” said Fury, 23 (17 KOs). “I think he’s a big hype-job. We once had a bit of a falling out in Sheffield at one of Mick Hennessy’s boxing shows and I told him one day I will get him in the ring and knock him out. That is still my plan.

“He’s got a title now and I’m the mandatory challenger for Wladimir Klitschko. In an ideal world I’d like to fight Klitschko first, because he’s got most of the belts and he’s the number one in the division, and then I’d like to unify all the titles against Deontay Wilder. Potentially, I’m three or four fights away from being the unified heavyweight champion of the world.”

Should the fight between Fury and Wilder materialise later this year, the Manchester man is under no illusions as to just how big an event it could become.

“It would be the biggest selling fight with the greatest smack talk in heavyweight history,” he said. “No other fight could come close to it. It would be pure entertainment.

“I’m a big puncher, he’s a big puncher, and it’s just a matter of who lands first. I wouldn’t go out there to try and outbox somebody who is probably quicker than me. I’d go out there to switch his lights off. I’d look to demolish him early. There’d be a guaranteed knockout in the early rounds. Either way, it will be over very fast.”

Promoter Mick Hennessy added: “Wilder’s win at the weekend has put the heavyweight division back where it should be. It has made it interesting again. It has given it a new lease of life.

“Wilder and Tyson are two unbeaten sensations. They’re proper modem day heavyweights, modern day gladiators; both are over 6’7 in height and are athletic.

“Ultimately, though, I think Tyson is in a different league to the likes of Wilder and Stiverne. I think he would take care of both of them on the same night. I thought that before Saturday night and I’m even more confident now. I don’t just think Tyson outclasses Wilder, I think he blasts him out.”