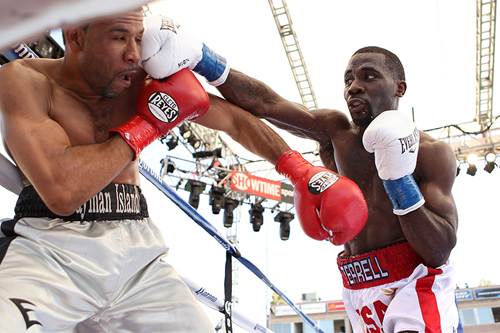 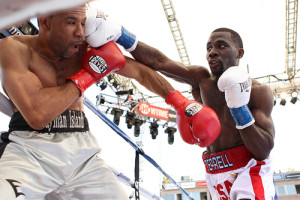 Depending on timing, the Gausha vs. Grajeda bout could begin on NBC before switching over to NBCSN.

That bout will be followed by the 12-round headlining attraction featuring Adrien ‘The Problem’ Broner taking on ‘Showtime’ Shawn Porter.

A full slate of unbeaten prospects round out the remainder of the card as Michael Hunter (7-0, 4 KO’s) battles Deon Elam (14-2, 8 KO’s) in a six-round heavyweight bout while Ladarius ‘Memphis’ Miller (7-0, 1 KO), Kevin ‘The Second Coming’ Newman (2-0-1, 1 KO) and Sanjarbek Rakhmmanov will all be featured in separate bouts.

Tickets for the live event, which is promoted by Mayweather Promotions in association with TGB Promotions, are priced at $400, $300, $100 and $50, not including applicable service charges and taxes, and are on sale now.

To charge by phone with a major credit card, call Ticketmaster at (800) 745-3000. Tickets are also available at www.mgmgrand.com or www.ticketmaster.com.

Born and raised in Cleveland, Gausha was a decorated amateur who won gold medals at the U.S. National Championships in 2009 and 2012.

The 27-year-old is undefeated since turning pro in 2012. Most recently he scored a knockout victory in March over Norberto Gonzalez to kick off his 2015 campaign and will look to build on that success when he takes on the 28-year-old Grajeda from Chihuahua, Mexico.

After winning four times in 2014, the Van Nuys, California-native won a unanimous decision over Avery Gibson in February to start 2015. Hunter takes on a fellow Van Nuys-native in the 35-year-old Elam.

An accomplished amateur who was a 2012 U.S. Olympic alternate, the 24-year-old Easter Jr. will be making his second straight start at the MGM Grand Garden Arena.

Unbeaten since turning pro in 2012, the Toledo, Ohio-born fighter delivered a second round knockout over Alejandro Rodriguez in March. Easter Jr. faces a tough challenge in the 31-year-old Mendoza from Aguascalientes, Mexico.

Born in Memphis but now fighting out of Las Vegas, Miller is looking for his third victory in 2015 having already beaten Ryan Picou and Marquis Taylor so far this year.

The 21-year-old is unbeaten in seven fights since turning pro early in 2014.

After picking up his first pro victory on March 6 at MGM Grand, 23-year-old Newman followed it up with his first knockout in April when he stopped Richard Urquizo in the first round.

Born in Los Angeles but fighting out of Las Vegas, Newman returns to the ring looking to build off of his last performance.

A former amateur Asian champion, Rakhmanov will make his pro debut to kick-off the exciting night of fights on June 20 as the fighter from Uzbekistan takes on an opponent to be determined in four rounds of junior-welterweight action.