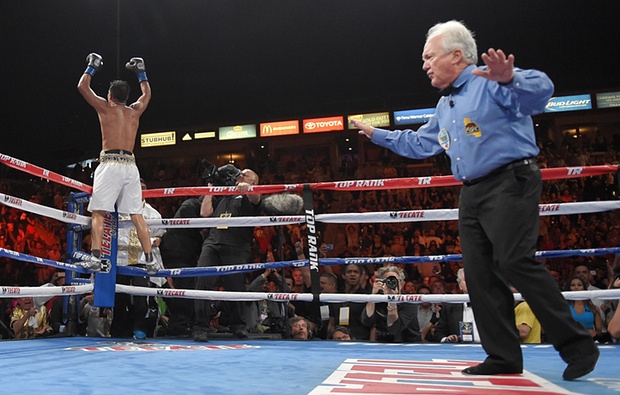 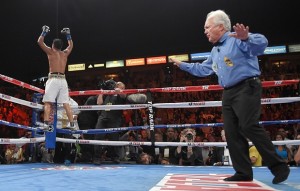 The young Mexican-American was out-hustled and out-punched over twelve rounds by the tenacious Bradley, who diminished Vargas’s advantages in height and reach by immediately countering single shots with clusters of rapid combinations.

Vargas did not have the deterrent in his gloves to halt the oncoming Bradley, nor the knowledge to pull his long limbs in and battle on the inside with him.

He did land the odd home-run swing however, and when one of them connected flush on Bradley’s cheek with less than a minute to go in the twelfth round, it appeared as though Vargas had pulled off the upset win.

The sweeping right hand staggered Bradley, and he made an unsteady backward retreat with a rejuvenated Vargas in close pursuit. The gap was closed quickly, and Bradley tried to hold on as Vargas unleashed a final barrage to finish the fight.

Referee Pat Russell stepped between them with seven seconds left on the clock to signal the end of the contest, seemingly in Vargas’ favour.

What followed was a period of prolonged confusion as Vargas was held aloft by his team with arms raised and a look of jubilation on his face.

Bradley just walked back to his corner in a state of apparent indifference, and Pat Russell scrambled to explain his actions to the judges at ringside.

He clarified what had happened to HBO’s Max Kellerman in the post-fight interview.

“Well, it was very loud in that twelfth round and I thought I heard the bell. The fight was over when the bell went off.”

So, as the warning sounded at ringside to signal ten seconds to go in the round, Russell mistook it for the final bell.

Amidst the action going on between Vargas and Bradley at that moment, this seemed to hand Vargas a sensational come from behind victory against a top pound-for-pound fighter.

Speaking with Esnewsreporting.com after the fight, an understandably dejected Vargas outlined how he felt about the fight and how it ended.

“I’m just upset. They stole a world title from me, or, an interim title. They didn’t let me accomplish what I had planned.

“All I needed was one punch; he was out dude. When they stopped it, no one said anything! Everyone was happy, so they accepted the stoppage.

“He accepted the stoppage. You know what he told me after? He told me ‘you’re a great champion,’ so he acknowledged the fact that I won.’”

Whether Bradley was conceding defeat at that moment or just giving an opponent his respect after a hard fight is impossible to tell, but it is inconsequential now that the official result is in.

When the idea of a rematch was put to him, an opportunity to avenge this defeat, Vargas was as concise as can be.

“I want a rematch ASAP! If it’s next month let’s get it.”

“Now it’s with a vengeance. I want my rematch; I wanna take this guy out.”

If Bradley-Vargas II is made, it will be to the delight of all who saw their first meeting for the exciting, action-packed bout that it was.

Bradley executed an intelligent gameplan and took away Vargas’s jab from the off, and cowed him with bullish charges through the middle rounds.

He pushed the action to intense levels. Despite the confusion at the finish, he was the clear victor and as is his habit, ate some huge bombs with no problem and continued coming forward.

Vargas will feel disheartened by the overall result but will take encouragement from his last stand in the final round, an incident that will embolden him to meet fire with fire if their second meeting comes to pass.

He had never faced a fighter of Bradley’s persistence, toughness and approach before; he didn’t know how to process the data in front of him.

He showed courage and decent power, and as long as he puts the lesson he learned here into practice next time out, he will reflect on his first professional loss as a blessing in disguise.