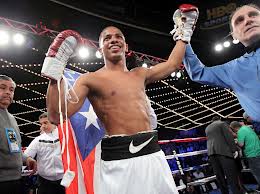 Felix Verdejo scored another sensational victory last night. ‘El Diamante’ scored the fifteenth win of his career by defeating  the tough Mexican Sergio ‘The Twin ‘ Villanueva in the main event of ‘Solo Boxeo Tecate ‘ that was held before a packed house at the Bahia Shriners Auditorium & Events Center.

After two initial rounds in which Villanueva  pressed and sought out exchanges with Verdejo, the young Puerto Rican prospect was able to connect cleanly on the chin of his opponent with a lightning counter right hook  from the southpaw, sending the Mexican to the canvas in very poor condition and causing the referee to stop the game Mexican at 1:57 of the third round.

With this phenomenal win over ‘ The Twin’ Verdejo improved to 15-0, with 11 of those wins coming by knockout.

After the fight, Verdejo received a special visit in the clubhouse, from Irma Garcia , mother of the eternal champion Félix ‘Tito’ Trinidad.

Doña Irma gave tips to Verdejo,  and even offered chicken that  she traditionally prepared for her son to recharge him after weigh-ins.

Verdejo was also commended in the clubhouse by the young MLB prospect Carlos Correa. He also received a visit from Sergio ‘ The Twin ‘ Villanueva , who congratulated him on his impressive win by knockout.

Verdejo is expected to have one more bout before the end of the year.

In the co -feature bout of the undercard, featherweight champion NABO , Gamalier ‘ Gammy ‘ Rodriguez got a comfortable win by TKO in the second round over Martin Gonzalez.

• Felix Verdejo Sergio Villanueva defeated by TKO at 1:57 of the 3rd round.

• Gamalier Rodríguez González beat Martin by TKO in the 2nd round.

• Evade Falcao scored a win by TKO at Austin Marcum at 1:24 of the 2nd round.

• Christopher Diaz Francisco Camacho defeated by TKO at 55 seconds of the 4th round.

• Nelsan Machado scored a TKO victory at the 1:03 Stephon McIntyre 1st round.