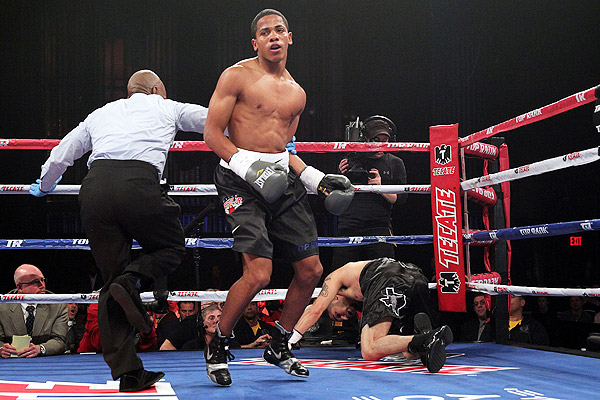 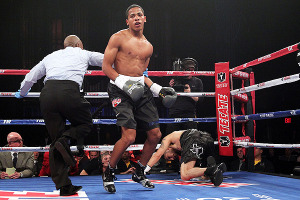 Last night in front of a loud and supportive crowd at the Bahia Shrine Temple in Orlando, Florida  Felix Verdejo the young star out of San Juan, Puerto Rico, scored a highlight reel knock out, over tough young veteran Sergio Villanueva. His power, speed and accuracy were in full display.

Many expected this to be a real test for the young fighter from Puerto Rico, but Verdejo made it look easy. The fight was competitive for the first two rounds. Sergio even landed a nice straight right hand at the very end of the first round. It developed a small hematoma on the bottom of Verdejo’s left eye. The second was also pretty even with both fighters showing each other respect, trying to bait the other in for a counter shot opportunity.

In the very beginning of the third and final round, Verdejo switched to south paw and began probing for possible openings. Then off of his back foot with his back almost against the ropes, Verdejo set Villanueva up using his own aggression against. Parrying off of a left hook from Villanueva he connected with a huge right hook counter, which sent his opponent reeling face first into the bottom rope.

Villanueva made a valiant attempt of trying to get back up, to continue the fight, only to fall backward a second time. He was in no condition to continue and referee called a halt to the bout awarding Verdejo, his most impressive win to date via knock out. He is now 15-0 with 11 KO’s.

In the rest of the televised undercard Gamalier Rodriguez knocked out his overmatched opponent Martin Cordona, in the second round to move along his word title ambitions another step forward. We also saw Christopher Diaz break down a tough as nails Francisco Camacho. To earn a hard fought fourth round knock out over his much taller and very resilient opponent.