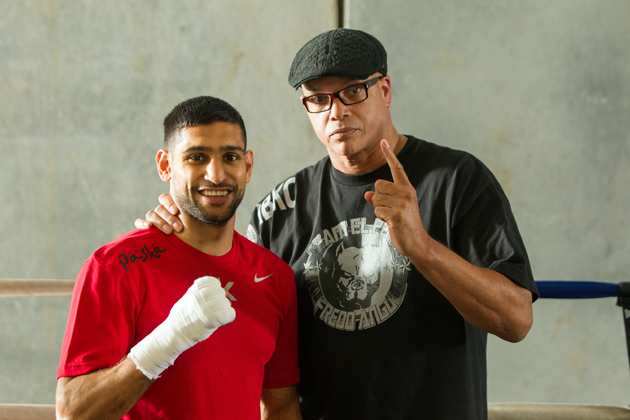 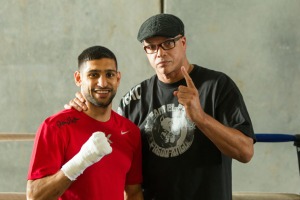 Tha Boxing Voice caught up with trainer Virgil Hunter and the topic of discussion was Amir Khan.

Hunter was asked what it has been like working with Khan since his knockout loss to junior welterweight champion Danny Garcia and if Khan has fully rebounded from that loss, Hunter who is never at a loss for words shared his opinions on Khan and underhandedly took a few shots at Freddie Roach Khan’s former trainer for good measure.

“I don’t look at Amir as coming out of the ashes the reason why I say that particularly in the Danny Garcia fight he (Khan) was dominating the fight and when he got knocked down he got up and finished the round rather impressive so he did his job he made it back to the corner that’s all a coach can ask a fighter to do.” So when you get back to the corner it’s up to that brain trust to make sure adamantly that, that does not happen again and why not, I don’t need to speak on what went on in that corner you can take a look at it for yourself but for some reason he went right back out and wanted to prove what you did was nothing, not using the gifts he was blessed with but using his heart and the blood that runs through his veins not fully knowing he needed another full round to fully recuperate.”

Hunter would go on to discuss Khan’s loss to Breidis Prescott and once again Hunter took a shot at the Khan’s former team for even having him the ring with Prescott given Khan’s age at the time. “That’s a fight he (Khan) had no business being in at 19 years old in his 7th or 8th fight. You don’t put your prospect in with a lethal puncher like that particularly if hes never been in that situation before and he got up from that, me personally I would have had someone from my corner and tell him once he got up when the ref lets it go, go to back to one knee, take a knee clear your head. I know I have a kid that boxes his way back but he has to have chance to do it. Once he came to me I programmed him for those types of situations.”

“He was not taught to survive a situation like that so that he can have an opportunity to get back in there. You know what you have in a 12 round fight. If you get knocked down, you lost that round. The only way to even that round is to knock him down. You lost the round let it go. If he would have been smart in the Danny Garcia fight, he was already up two rounds with the knockdown. He would have been even if they would of sent him back out there the next round and told him don’t throw a punch. If you have to throw a punch use your fundamental jab. Use your legs and he will only be up one round and I know he can’t out box you because I’ve already seen that,” again taking a shot at the instructions Roach gave Khan following the knockdown that he suffered in the Garcia fight.

Hunter has implemented a more defensively responsible style for Khan since the pair joined after the Garcia fight. The jury is still out on the Khan-Hunter partnership. Tonight will be the duo’s biggest test together as they face two time champion Devon Alexander. Can Hunter’s change in style land Khan the mega fights he so desires?