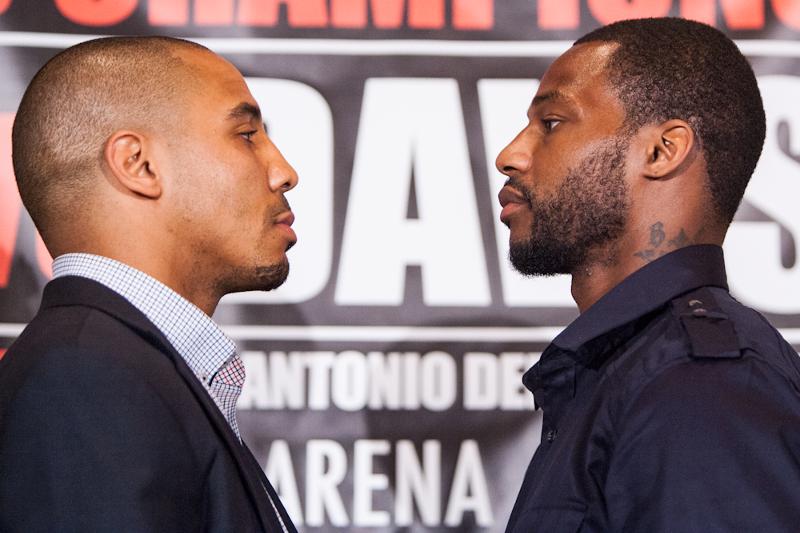 The Bay area of California has produced some champions and recently produced big wins for its native fighters like Nonito Donaire and Robert Guerrero, who both scored wins in their last outings. Up next is Andre Ward as he prepares to do battle against his most dangerous, most experienced opponent to date. “Bad” Chad Dawson is nothing like Ward has ever faced. Equipped with a set of boxing skills that can’t be taught, Dawson will walk into the ring on fight night with more than a few advantages.

The height difference, while not that much, is there. “He’s a tree. I have to find a way to chop him down,” Ward said at a presser to start the promotional tour. Dawson also has a reach advantage sporting a 76′ reach that will be used to keep Ward at “bay” if Dawson can box as he did against Glen Johnson in their second fight or versus Adamek. The 6′ inch reach advantage will play a big part in this fight.

Dawson comes into the ring with some disadvantages as he will be dropping down one weight class to make this fight possible; a bold move by the current light heavyweight Ring Magazine and WBC champion. Dawson is also going into enemy territory on fight night.

Andre Ward is boxing’s American poster boy and US Olympian– Ward was a Gold Medalist at the 2004 Summer Olympics. Ward won the Light Heavyweight gold medal for the United States at the 2004 Olympics in Athens, Greece becoming the first American boxer to capture gold in 8 years. Ward’s accolades would take up more paper then ink available, so let’s just say he’s a unique talent.

The making of this fight is seeing Ward back in the promise land that is HBO championship boxing. “The road I’ve taken to this point has not been easy. Being back on HBO is a big thing, but fighting on HBO in my hometown is huge. To be great you have to fight the best,” Ward said.

The best is represented by “Bad” Chad Dawson, as Ward has single handedly taken apart the168 division, a weight class in which the former Olympic gold medalist has dominated since 2009. The last man standing in the division was Canada’s own Lucian Bute, who was obliterated in a 5th round TKO by a victim of Ward in Carl “The Cobra” Froch. So facing Dawson was really Ward’s most realistic option.

The 28-year-old Ward last fought in December, convincingly beating Carl Froch to win Showtime’s Super Six World Boxing Classic, he will be nearing almost a year layoff. Dawson on the other hand last fought April 28, 2012 he when beat the legendary Bernard Hopkins in Atlantic City in a rematch of their October 2011 fight — a fight that ended in a no contest. “Chad has beaten the best so these are the type fights I want to take. I will put on a great show for all the fans that come out to Oracle Arena,” Ward said.

On September 8 on HBO, live from the Oracle Arena in Oakland, the super middleweight and the light heavyweight’s best fighters, Andre Ward and Chad Dawson, will go to war in a fight that will see the best American of the Unites States evolve into a superstar and possibly the next PPV star as well; both fighters are in their primes, but at the end of the night there can only be one.