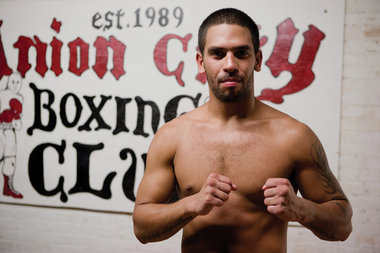 On April 26, 2012 Juan Rodriguez stepped into the ring, and scored an astonishing second round knockout. For those who hadn’t seen the Union City, NJ native before, it definitely caught some fans attention. I got the chance to go to the gym where he works out, The Union City Boxing Club, and talk to him as he prepares for his next fight.

He will be fighting on August 31st at the Mount Airy Casino and Resort in the Pocono Mountains against a yet to be named opponent. But not having an opponent isn’t deterring “The Beast” from being prepared. He banks all of his success on being prepared. I asked him if he could go back to his pro debut, knowing what he knows now, what would he tell himself. He simply answered, “Be ready. I wasn’t as in-shape; ready to fight as I should have been. That’s one thing I would change.”

His method of preparation is strictly physical. He does not watch tape or follow boxing as a fan. He prepares his body; sparring, jumping rope, working the bags, etc. while his trainer prepares for the opponent; watching tape and configuring strategy. He says, “It’s not my job to watch tape, I just go out at the bell and fight.”  He does, however, watch classic tapes. Mentioning that he has studied and picked up some moves from great fighters like Sugar Ray and Pernell Whitaker.

With a winning record of nine wins and no defeats, four of those wins coming by way of knockout, Rodriguez takes the fights in front of him. He does pick and chose and refuses to name someone he wants to meet in the ring saying, “It’s not my place to call anyone out yet.”  Admitting that he learns something from every fight, he also said that he improves with every fight, correcting his mistakes, and moving on.

He comes from humble beginnings, accrediting his start in boxing to his father. Rodriguez was fighting a lot in the tough streets of Union City, NJ at a young age. His father brought him to the boxing gym at the age of twelve in an attempt to get him off the streets, but it didn’t stick. After being incarcerated, he decided to give it another try. He was sixteen; the now 25 year old has made a career of it. He finds inspiration in his children, and says he fights for them.

Vice president of KEA Boxing, Rodriguez’s promoter, Alex Kut, has big plans for his top prospect. Promoting most shows in New Jersey, Kut is taking his next show to Pennsylvania for the fights at Mount Airy. “He just might be my big break,” Kut has said. All I have to say about that, based on my conversations with both Rodriguez and Kut, is that he just might be.