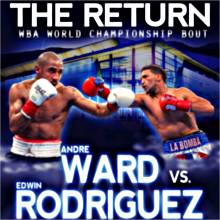 LONDON (31 Oct) – BoxNation’s knockout November is set to pack even more of a punch with the channel adding super-middleweight supremo Andre Ward’s crunch world title clash with undefeated Edwin Rodriguez to its star studded lineup.
The encounter sees the world’s best 168-pounder, Ward, defend his WBA world super-middleweight title on November 16th in Ontario, California against the ferocious 28-year-old from the Dominican Republic, adding yet another mouth-watering matchup on the ‘Channel of Champions’.
Boxing superstar Manny Pacquiao’s ring return against the formidable Brandon Rios in Macao, China on November 23rd and Queensberry’s Copper Box extravaganza on November 30th, featuring heavyweight hitman Dereck Chisora and former world champion Nathan Cleverly, are the other main attractions in a jam-packed November schedule.
And now, with the addition of Ward, regarded as one of the slickest and best pound-for-pound fighters in the world, BoxNation has yet again delivered a fight that will have boxing fans on the edge of their seat.
The bout with the hardened Rodriguez comes after a 14-month layoff for Ward, due to a shoulder injury, having previously worked his way through some of the very best including Chad Dawson, Mikkel Kessler and Britain’s Carl Froch, capturing the WBC, WBA and Ring Magazine world titles along the way.
“I’m excited to get back in the ring on November 16,” stated the champion Ward. “The opponent is Edwin Rodriguez. He’s a young, hungry, undefeated fighter who doesn’t believe he can lose and it’s my job to change his mind. I think he and his team feel like they are going to catch me slipping coming off of surgery and the layoff. I try to live like a champion. I stay in the gym, eat well, and don’t abuse my body and this rest that I got was needed. I don’t feel like the layoff will hurt me, I feel like it will help me. It allowed me to rest mentally and physically, and I want to show the fans on November 16 that I’m better than I was before I left.”
After making a huge statement in his last bout, stopping Denis Grachev in the first round at the ‘Monaco Million Dollar Super Four Tournament’,
Rodriguez believes he has all the tools to cause a big upset. “Vince Lombardi once said, ‘Life’s battles don’t always go to the stronger or faster man. But sooner or later, the man who wins is the man who thinks he can.’ On November 16th, I know I will win,” said Rodriguez.
Jim McMunn, General Manager of BoxNation, said: “It’s great that we continue to deliver the biggest and best boxing shows live and exclusive on BoxNation. The aim of the channel from the outset was to make sure British fights fans had access to the best fights from all over the world at the very best possible value. We are delighted that we have been able to add yet another great fight to our packed November schedule, this time featuring arguably the second best pound-for-pound fighter in the world in Andre Ward. With a host of names including Manny Pacquiao, Brandon Rios, Dereck Chisora, Nathan Cleverly, and many more also featuring, Christmas has come early for all boxing lovers.”
BoxNation is a dedicated subscription boxing channel offering UK fight fans the best bouts from the domestic and international circuit for only £10 a month (plus a one off £10 registration fee). For more information please visit www.boxnation.com.
Tweet