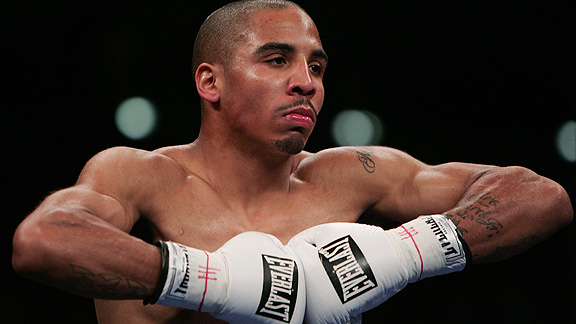 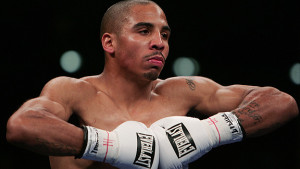 Undefeated WBA Super World super-middleweight champion Andre Ward (28-0, 15 KO’s) doesn’t have his next fight scheduled yet, but we all have a feeling on who he would like to fight next.

Dropping by ESPN studios via Fight News earlier Monday, Ward pointed the finger at WBA Super World middleweight champion Gennady Golovkin before the show had begun, calling on the Kazakh to stop hiding behind his promoter, trainer, and step up to fight him.

“Andre Ward is available and we can make it happen. They want Golovkin to smile and wave and be the pretty boy, and the promoters do the tough talk. If I respond, I’m the villain. If Triple G wants to fight, come from behind the promoter, come from behind the trainer, tell them to call HBO. I’ve already done this before the show because I knew you guys were going to ask me this. Let’s make it happen!”

In an exclusive interview with Boxing Scene in June, Ward accused Golovkin of making excuses to avoid fighting him.

“If the fans and the writers buy that, then they are going to continue to say that,” Ward said.

“The reality is this, and I’m not trying to come off as a tough guy because I’m not a tough guy. I just come to fight and do my best and fight the best. The reality is, when Carl Froch fought Mikkel Kessler the second time, I commentated that fight. I was in his country. I told him, I told his promoter to pick up the phone and let’s make it happen. When you’re in somebody’s backyard and they say those kind of things, and they don’t respond and come with excuses – you got your answer.

“Guys like Froch, or even Golovkin, these guys have had at least eight or nine different excuses – from ‘we’ll fight everybody but him, we’ve got to build it up, he’s scared, he’s just talking.’ It’s just ridiculous and I don’t even follow it anymore and you won’t hear me call their names anymore, because I’ve got too much respect for what I’ve accomplished in this sport and I’ve got too much respect for my legacy as a whole to chase anybody at this point in time.”

Golovkin told Boxing Scene that Ward is lying out of his teeth, claiming a prior meeting with HBO where both men were reportedly asked if they were ready to fight each other.

“You remember our answers? I said ‘yes’ and you said ‘no.’ Something about your shoulder or promoter. I am not interested in your reasons, I only heard your ‘no.’ But you remember HBO made it clear back then that this fight needs a lot of time to build up. Then why are you talking sh** about excuses?”

There was a legitimate reason Ward-Golovkin wasn’t made at the time of the initial meeting with HBO, and Golovkin knows it. He’s not dumb.

However, when both men are out of the ring with nothing scheduled, there is no excuse why this fight shouldn’t happen. On the other hand, it appears HBO is taking the rest of the summer off for the most part.

Golovkin’s signed a multi-fight extension with HBO on July 28, 2014. The deal called for a minimum of four fights, beginning with his TKO of Daniel Geale. That four-fight deal concluded with his sixth-round TKO of Willie Monroe Jr. in May

Andre Ward recently stopped Paul Smith in June on BET. Theoretically, Golovkin could leave HBO to fight Ward. However, something tells me HBO would have a major issue with that.

The earliest I can see this fight happening is in the early months of 2016.