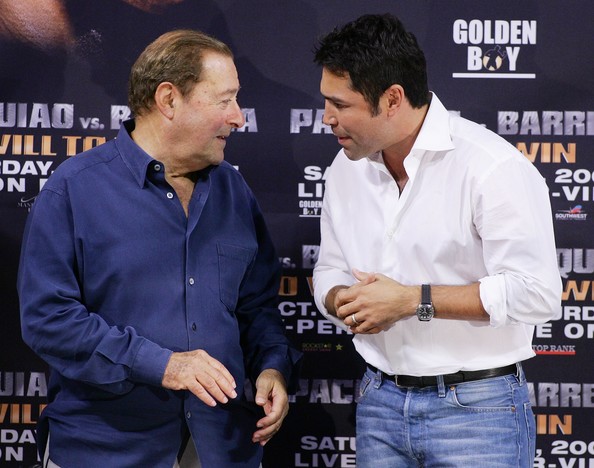 Sept. 15 Saul “Canelo” Alvarez vs. Victor Ortiz at Las Vegas (Showtime PPV): This was a bit of a curveball for those of us anticipating a showdown between Canelo and Carlos Quintana. When this was first announced earlier in the week I thought the fight between Ortiz and Josesito Lopez was called off. Instead, the June 23rd bout between Ortiz and Lopez is still on and part of the stipulation for the Canelo fight is that Ortiz win or draw (he probably can’t get too banged up either). It seems like Golden Boy is being a little too disrespectful towards Lopez; so much so that Golden Boy doesn’t believe he’ll win or even present the kind of danger that would keep Ortiz from competing 3 months later. Don’t get wrong, I too doubt Lopez pulls the upset, but I’m not the promoter. I like Canelo-Ortiz because it’s the kind of fight that suggests war; although probably not the kind of war that is both entertaining and competitive. Still, I think this fight has all the makings for non-stop action throughout the duration of the fight (however long that is).

A few weeks back thaboxingvoice radio show had a debate over who would and should win the Canelo sweepstakes. While everyone had their own opinions it was co-host CJ that argued the fight should be between Canelo and the most formidable of opponents. His opinion on formidable was Austin Trout who recently kept his undeafeted record intact against Delvin Rodriguez in what was a very uninspiring performance. Although the prospects of a Canelo-Ortiz fight excites me more than that of a Canelo-Trout fight, still, I can’t help but see his point a little more today. The fact is Trout at 154lbs deserves a shot at Canelo more than an Ortiz at 154lbs. That said, I’d much rather pay for the fight we’re getting opposed to the fight we should (unless we’re talking Williams because that was the best opponent of all).

July 7 Kelly Pavlik vs. Will Rosinsky at Carson, Calif. (HBO): I was pretty bummed hearing that Brandon Rios pulled out of his junior welterweight fight with Mauricio Herrera. I felt that fight was made with stylistic optimism in mind. I could write 100000 words on how good the fight would’ve been and why it made sense for both guys, but why dwell any further on a fight that is not going to happen (not a question). Instead, I too will remain optimistic on the prospects of seeing Kelly Pavlik (39-2) against Will Rosinsky (16-1) on what is the new co-feature of HBO’s “Boxing After Dark” card on July 7 at the Home Depot Center in Carson, Calif. The main event of that night will pit Nonito Donaire and Jeffrey Mathebula in a junior featherweight title unification bout. Pavlik is on the verge of his second or third comeback (can’t keep track at this point) and although many fans haven’t forgiven him for ditching out on boxing the last time, supposedly because of the lack of money he would’ve made fighting Bute, he did look good in his last fight. Pavlik looked fierce and somewhat polished when you keep in mind his lack of activity over the last 2 years. Rosinsky is an opponent I like for Pavlik at this point because Rosinsky isn’t the overzealous fight Pavlik isn’t ready for, but he is the hard-nose fighter who can and will present Pavlik with problems. Rosinsky’s only loss came at the hands of highly acclaimed Edwin Rodriguez and although he lost a unanimous decision, I remember him having more success than most of Rodriguez’s opponents thus far. The facet of the fight that interest me most is that Rosinsky is the type of fight for Pavlik that, if successful, could launch Pavlik into the necessary mind frame needed to take on the top fighters in the super middleweight division. Yet, Rosinsky is also a strong enough opponent to pull the not so surprising upset. If Pavlik comes in even a little unprepared for this fight then Rosinsky is more than capable enough of winning. Plus, I think these 2 fighters will make a solid fight and that’s all we can really ask.

July 6 Javier Fortuna vs. Cristobal Cruz at Las Vegas (ESPN 2 FNF): With Marvin Sonsona out of his July 6th “Friday Night Fights” main-event with Orlando Cruz due to thigh injury and blood infection it has opened the door for a fight between impressive prospect Javier Fortuna (19-0) against seasoned veteran Cristobal Cruz (39-13-3). Javier Fortuna is coming off an impressive first round KO of Yuandale Evans. Fortuna has looked incredible so far and is every bit the dynamic fighter advertised (so far). Cruz on the other hand hasn’t been on the winning side of things as of late. That said, he looked really good against another junior lightweight prospect in Juan Carlos Burgos. Cruz took Burgos to the limits in what was supposed to be a showcase for Burgos. I love the potential for this fight and it can provide real fireworks or it can be yet another opportunity for Fortuna to separate himself from the shallow depths of the 130lbs pack.

July 21 Marcos Maidana vs. Keith Thurman at Cincinnati (HBO): Maidana-Thurman doesn’t belong anywhere near a televised HBO card. Since this fight was announced last week it has gotten a lot of backlash from fans and media alike. The fact is although Keith Thurman is undefeated with 16KO in 17 wins, he’s still never been in a 10 round scheduled fight. In fact, of his 18 total fights (Thurman has 1 NC) he’s only been past 4 rounds once. I’m not sure how this fight got approved to be the televised co-feature under the Adrien Broner vs. Vicente Escobedo main event, but I do know it’s as bush-league as it gets.

July 28 Orlando Salido vs. Oscar Bravo at Ciudad Orbregon Mexico: It was announced this week that Salido (38-11-2) will fight Bravo (20-3) in a non-title junior lightweight fight on July 28th. The fight itself isn’t really that newsworthy, the fight is simply a stay busy fight for Salido. However, the newsworthy aspect of this announcement is that Salido is scheduled for a fall title defense against Miguel Angel “Mikey” Garcia. Garcia was supposed to fight Celestino Caballero on July 28th for Caballero’s title, but that fight has since been canceled.

September 15 Julio Cesar Chavez Jr. vs. Sergio Martinez at Las Vegas Nevada (HBO PPV): After Chavez Jr’s impressive victory over Andy Lee Saturday, it didn’t take long for Bob Arum and Lou Dibella to announce the next big pay-per-view fight of the fall between the recognized Middleweight champion of the world Sergio Martinez taking on the WBC Middleweight champion Chavez Jr. This is the payday fight Martinez has been chasing for since his rise on the pound for pound ranks the last two years and the opponent Chavez can use to finally got out of his daddy’s shadow.  Some thought Chavez and Arum would never take the fight. Well surprise! This is a very good fight curtailing the speed and power of Martinez versus the size and strength of Chavez.

Only problem with this fight is that it happens to fall on the same day and in the same city as the Alvarez-Ortiz showdown. If you thought the cold war between Golden Boy and Top Rank would ever thaw out, well it looks like this head to head taking place between the two companies using rival network will only freeze it about another negative 1000 degrees.