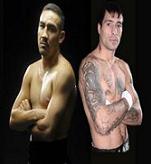 umberto “La Zorrita” Soto is a former three division champ with a record of 59-7-1 (38 KO). The 15 year veteran has earned titles at featherweight, super featherweight, and lightweight and is coming into this contest riding a 15 fight consecutive win streak. The 32 year old Mexican resides in Tijuana with his birth place being Sinaloa. Soto’s career of 66 total fights in 15 years with over 470 rounds of experience is proof that he is not only committed to the sport but has trouble staying away from the ring.

One of his biggest victories took place on August 20, 2005 where he beat Rocky Juarez on a fight he accepted on two week notice. La Zorrita has recently signed with Golden Boy and his reward is to face Lucas Matthysse.

Lucas Matthysee is a heavy handed knockout artist that has a record of 30 wins, 28 coming by way of knockout, and only 2 defeats by split decision. The Argentinean Matthysee has knocked out or knocked down 31 out of his 32 opponents. The 29 year old is not afraid to go in the opponent’s backyard, even after his two controversial defeats took place in the opponent’s hometown. His first loss took place June 11, 2011 to Brooklyn’s Zab Judah at the Prudential Center in Newark New Jersey. Matthysee had Judah in trouble in the 10th round as he went down; unfortunately for him all three judges scored it 114-113 with 2 seeing it in favor of Judah.

A year later Lucas had his chance on the big stage again, but this time he faced off against Devon Alexander in St. Louis. Matthysee had Alexander hurt in the 4th round and although Lucas out landed, hurt, and knocked down Alexander, still the judges scored it 96-93 Matthysee, 96-93 Alexander, and 95-94 Alexander. 27 out of Lucas’s 32 fights have ended in less than 4 rounds. With 32 professional fights he has only 110 rounds of ring experience in the pros.

Soto vs. Matthysee is a great matchup with both fighters having something to prove against each other. The knock on Soto is that his competition has, at times, been less than stellar. The knock on Matthysee is can he finally get that Knockout on premium TV?

Soto will depend on his experience for this fight and has said “the difference in this fight is experience. I have a lot of experience and that’s what’s going to lead me to victory. We’re going toe to toe.” Matthysee was quoted in saying “He wants to come to battle and that makes me very happy because we are ready to give him war.” My prediction is that the proud Mexican will go out on his shield by trying to exchange with the younger, fresher, and naturally stronger Lucas Matthysee and will knockout Soto in 5.