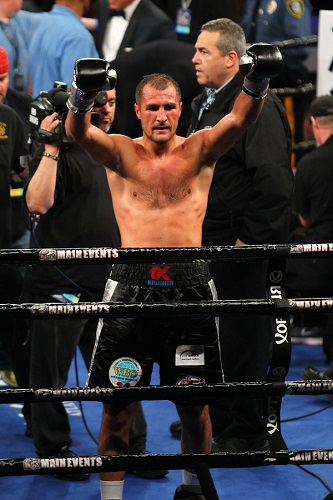 Atlantic City, NJ:  In front of a packed house at Boardwalk Hall in Atlantic City, NJ the Russian Wrecking Ball Sergey “Krusher” Kovalev (24-0-1, 22 KOs)* knocked out Cedric “L.O.W.” Agnew (26-1, 13 KOs) in seventh round to retain his WBO Light Heavyweight belt live on HBO Boxing After Dark. The Ballroom at Boardwalk Hall shook as Krusher made his entrance. Michael Buffer said of these two undefeated fighters as he announced the fight, “Someone’s 0 has got to go!”

Both fighters were feeling each other out early in the bout while the chants of “USA” came from the nearly sold-out crowd in AC. Agnew, normally a right handed fighter, came out boxing southpaw. Krusher knocked down Agnew just as the bell rang in the second round. Kovalev suffered a cut under his right eye in the fourth. Agnew took Kovalev deeper than he has gone in his last six fights but could not defeat him. Kovalev won via TKO 0:58 into the seventh round. The final punch total:  Kovalev 107 of 402 and Agnew 31 for 109.
After the fight Krusher said, “It was a difficult fight tonight because I got the two cuts. One from his hand and one from his shoulder. I don’t like the floor. He has good defense. I found the key – the left to the body. This is very good for me. I was ready for 12 rounds – just to try. He is not a fighter, he is just a boxer. I tried to box with him. I found the key to the body. I found this open place in his defense and my last punch was more harder.” When asked about Adonis Stevenson Kovalev responded, “Adonis Stevenson is a piece of shit. I will fight any champion in my division. I want to get another title. I am ready for anyone. I will be great boxer.”
Main Events’ CEO Kathy Duva said, “Agnew was far tougher than anyone gave him credit for. Sergey is just incredible. We look forward to a nice long run with the best light heavyweight in the world.
Cedric Agnew said only, “I will be back.”
After the melee at the weigh-in Friday the Puerto Rican Thomas Dulorme and Karim Mayfield of San Francisco, CA finally got to meet in the ring in the co-feature for a ten round battle for the vacant NABF light welterweight title. The fight was exciting right from the beginning but things really started to heat up just before the bell in the third round. Dulorme was cut with an accidental head-butt in the eighth round. After ten grueling rounds Dulorme wins via unanimous decision with the scores: 98-92, 97-94 and 96-93. Mayfield landed 21% of his punches (61 of 284) while Dulorme landed 27% (83 of 308). More impressively, Dulorme landed 36% of his power punches (49 of 135) while Mayfield only landed 21% (36 of 169). Their average punches per round were almost identical: Mayfield 28 and Dulorme 30.
Light Heavyweights Lionell “Lonnie B” Thompson (15-3, 9 KOs) of Buffalo, NY and Radivoje “Hot Rod” Kalajdzic (15-0, 10 KOs) of St. Petersburg, FL met for eight rounds (originally scheduled for ten rounds was cut due to unforeseen delays with the undercard) just prior to the co-feature. “Hot Rod” started strong but tired in the later rounds. Thompson turned it on as Kalajdzic began to wear down but it was not enough to secure the victory. Kalajdzic won via split decision with the judges scoring the bout 78-72 and 76-75 for Kalajdzic and 77-75 for Thompson. The referee Allen Huggins deducted a point from Thompson for spitting out his mouthpiece. Lonnie B said, “I think the score was kind of crazy. I felt like it was close. He is a good fighter. I thought I did enough in the later rounds to win. He fought a tough fight. I am going to go back in the gym, work on my mistakes and come back stronger next time. I thank God that I just came out safe. I am sorry I didn’t get the decision tonight but mark my words I will be back.”
For the first fully international card of the night junior middleweight Puerto Rican Wilky Campfort (17-1, 9 KOs) took on undefeated Khurshid Abdullaev (6-1-1, 3 KOs) of Russia for eight rounds. Campfort knocked Abdullaev down in the first and in the second Campfort threw Abdullaev out of the ring. The Russian came back with a vengeance in the third getting in several key hits. This gutty, gritty brawl was almost too close to call. Campfort won via a very close split decision with the judges scoring the bout 77-74 for Campfort, 76-74 for Abdullaev and 76-75 for Campfort.
In the only New York versus New York match-up of the evening, heavyweights Adam Kownacki (6-0, 6 KOs) of Brooklyn, NY and Excell Holmes (2-3-1, 1 KO) of Buffalo, NY hooked up for a scheduled four rounds. Kownacki came out swinging early and had Holmes bleeding and up against the ropes in the first round. The crowd was filled with Kownacki supporters and they were letting Holmes know it. Kownacki continued to come after Holmes in the second when the referee stopped the fight at 0:41. Kownacki keeps his perfect undefeated record of every win coming by way of knockout alive.
In a face-off for New Jersey bragging rights Rafael Jastrzebski (4-8-1, 1 KO) of Vineland, NJ took on Michael Mitchell (3-3-2, 1 KO) of Paterson, NJ for a scheduled four rounds of super middleweight action. However, Jastrzebski went down twice in the second before the referee called the fight at 2:53. This was Mitchell’s first career TKO.
In the four-round battle between unbeaten light welterweights Wellington Romero (3-0, 1 KO) of Newburgh, NY and Gerald Smith (3-1, 1 KO) of Philadelphia, PA Romero knocked down Smith in the first round. Smith got up swinging but Romero had him up against the ropes again. All three judges unanimously scored the bout 40-35 for Romero who remains undefeated.
In the first fight of the evening, a six round middleweight match-up between Dushane Crooks (6-1, 4 KOs) of Brooklyn, NY and Ismael Garcia (6-0, 3 KOs) of Vineland, NJ the crowd was fired up from the first bell. These two undefeated fighters provided the Boardwalk Hall crowd with an action-packed bout which ended with a unanimous decision victory for Garcia with all three judges scoring the bout 58-56.
Tweet