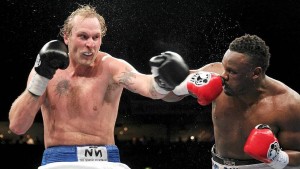 Robert Helenius (19-0, 11 KOs) has voiced his desire to return to the ring. “Robert is one of the biggest heavyweight talents out there,” Sauerland Event CEO Chris Meyer said.

“It´s a pity that he hasn´t fought in almost two years. We understand he has now announced that he wants to return for a show in Tallinn. Of course he can do whatever he wants, however if he intends to fight again, he needs to talk to us first. We have an existing promotional agreement which we expect him to honour. We will take legal action against everybody who is undermining our contract with him. I think it would be to the benefit of everybody, especially the fight fans, if Robert focused on breaking jaws rather than laws.”