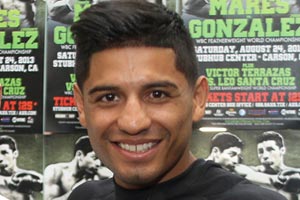 Abner Mares stood in the MGM media room after a fan friendly fight and explained what he wanted in 2015. “I want my belt, it’s been something I have been craving and wanting for so long and I think the hunger is back,” Mares said to ThaBoxingVoice.com. This was a startling honest remark from Mares who spent the last year recovering from a knockout loss in 2013 to Jhonny Gonzalez that seemingly took Mares from the pound for pound list to fighting guys diehards know little about.

“I felt really good in the ring, really comfortable, it was like I was at home. I had a tough opponent and he just wouldn’t go away,” Mares explained. Mares’ performance wasn’t without flaws as he engaged in a back and forth war that saw defense go out the window. Mares dropped Ramirez multiple times, but let’s be honest this was a fight that Mares was supposed to win in one-sided fashion.

“Why do I think I can beat Jhonny Gonzalez? Well, I am better than him,” Mares went on to say. This was followed by an explanation stating “I am not going to say it was a lucky punch,” but then essentially insinuating that it was a lucky punch and that he wants a rematch.

Leo Santa Cruz offered his insight to ThaBoxingVoice.com telling our reporter, Sean Zittel, that Mares looked great, but he would welcome that fight next. “I think personally this , this is more personal, Jhonny [Gonzalez] took my belt, he took my O, my undefeated record. So this is more personal with him,” Mares said. Though he also added that this is a business so if Santa Cruz makes more sense than it could happen first.