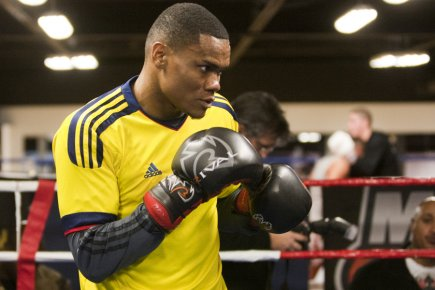 The fast-rising, explosive Alvarez (12-0-0, 8 KOs), a 2008 Colombian Olympian who lives in Montreal, is on his way to positioning himself for a world title shot. Already ranked No. 4 by the World Boxing Association (WBA) and No. 7 by the World Boxing Organization (WBO), he is stepping up in class to face Green (32-4-0, 22 KOs), fighting out of Tulsa (OK), who fought in the Super Six tournament.

The 10-round ESPN co-feature showcases former International Boxing Federation (IBF) featherweight champion Billy “The Kid” Dib (35-2, 21 KOs) in a 10-round bout against Hartford favorite “Machine Gun” Mike Oliver (25-3, 8 KOs).  A native of Australia, Dib is coming off a highly-competitive, fan-friendly fight on March 1, also shown on ESPN Friday Night Fights, in which he lost a 12-round split decision and his IBF belt to undefeated Russian Evgeny Gradovich (18-0).

Dib is the No. 4-rated featherweight in the world by the IBF, as well as ranked No. 7 by The Ring Magazine, and No. 15 by the WBO.  Oliver is a former International Boxing Organization (IBO) and United States Boxing Association (USBA) super bantamweight champion.

Unbeaten lightweight prospect Mark “Too Sharp” Davis (16-0, 5 KOs) meets Danish Robert “Super” Osobe (14-5-4, 6 KOs), fighting out of Las Vegas, in an eight-round bound. The 26-year-old Davis, of Baton Rouge (LA), has been inactive since November 12, 2011, when he won a 10-round unanimous decision over Guillermo Sanchez.  Davis was a highly-decorated amateur who captured gold medals at the 2005 and 2006 U.S. National Championships.

Dib, Davis, Olivares, and Strayhorn are promoted by 50 Cent.

Doors open at 6 p.m. ET with the first fight scheduled to start at 7 p.m. ET.

50 Cent:  “I’m excited because this is the first show put together by SMS Promotions.  It’s been a learning experience.  We’ve been part of shows but never did the promotional job.  I’m not far from home in Farmington. We’ve put together a real event with some of the best fighters in the world, good prospects and some local fighters.  We’re creating a platform for fighters to progress and I want to be part of it.  Overall, it’s a great opportunity to do things a little differently.  I’ve associated myself with some big name fighters.

“The Hartford area has a long boxing history with Hall of Famer Willie Pep and other world champions and top contenders like Battling Battalino, Marlon Starling (in attendance), Kid Kaplan, Tyrone Booze and ‘Iceman’ John Scully.

Mike Oliver:  “I want to thank 50 for having me on his card.  I haven’t fought in over a year but I’m back. My last fight was against Juanma (Juan Manuel Lopez) but that was in Puerto Rico and this fight is in my hometown, Hartford.  I know you don’t believe me 50 but I’m going to beat your guy.  He better bring his A game.  I’m back! This is going to be a good fight.”

Javier Flores:  “I want to thank everybody for coming out and the company for giving me an opportunity to fight July 5.  I want thank 50 Cent. It’s a pleasure working for him.  I’ve been training hard for this fight because I believe it will open many doors for me.  July 5th you will see the best of me.”

Jimmy Williams:  “I want to thank 50 Cent for putting me on my second TV card for 50.  I’m so excited I want to fight right now.  My mom told me when I was eight that I was going to be a boxer.  I wanted to play football but I’m living the dream.  I can beat somebody without going to jail.  I’ve looked up to 50 and I’m motivated.  July 5th I’m coming to fight.”

David Wilson:  “I want to thank 50 for putting me on this show.  I’m training to win and that’s all I’ll accept.”