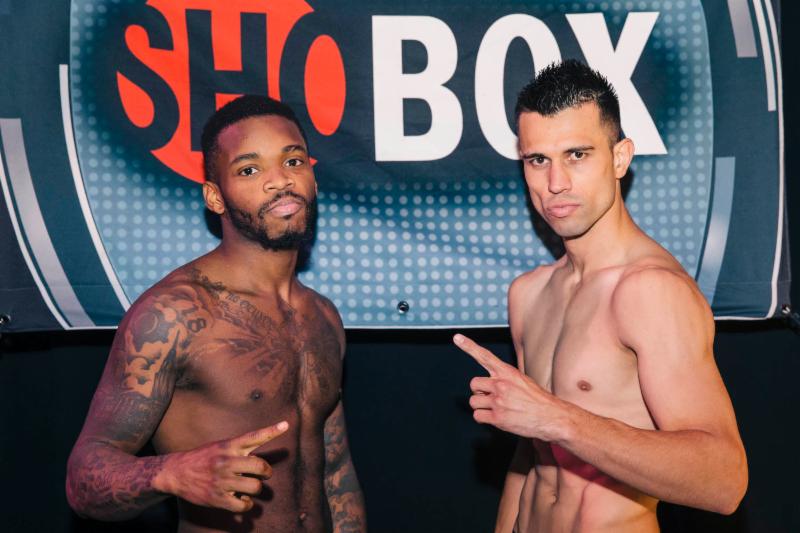 NDIO, Calif.  (June 5, 2014) – Gary Shaw Productions, Francisco Santana, who weighed-in at 148.2 pounds, gears up for his upcoming fight against Eddie Gomez, who measured up at 149 pounds.  The 10-round co-main event showdown will air tomorrow/Friday, June 6 fromFantasy Springs Resort Casino in Indio, Calif., on ShoBox: The New Generation, live onSHOWTIME® at 10 p.m. ET/PT (delayed on the West Coast).

“I’m confident in my skills, and want to thank my promoter Gary Shaw for supporting me when nobody else believed in me.  In my last fight I scored a 3rd knockout against Jorge Pimentel, so I feel my punches are very powerful at this point in my career.”

“I’ve been in there with the tougher guys.  My three losses were against some of the top guys in their division.  Karim Mayfield wasn’t undefeated, but he was one of the top contenders.  Jermell Charlo, I don’t take anything away from him, he’s right there close to winning a world title.  I can say that I’ve been matched tough, I’ve been tested and I know what to expect and how to overcome that.

“He doesn’t have anything I haven’t seen before.  We’re both two fighters with two hands and all it takes is one punch to win the fight.

“I’m just excited to do what I’ve been put here to do, and that’s to win a world title.  This is my journey, it hasn’t always been easy, but a win on Friday will put me one step closer.

“Whether he is tested or untested, right now my will and my determination to keep climbing to the top is above and beyond.  I think I’m in a good spot.  Obviously he’s a pretty young kid and I’m sure he’s thinking he’s just going to out-power me, but I’m going to prove him wrong tomorrow night.

“On paper I don’t have more power, but I know I can pack a punch.  I’ve faced the bigger guys, junior middleweights and middleweights, so I know that I can end the fight with one punch.”