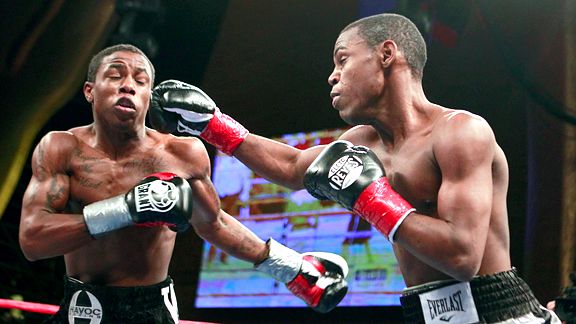 Javier “El Abèjon” Fortuna is a top prospect knocking down the doors to his move to top contender status. Abèjon is Spanish for a bee, but a much bigger bee then the normal male bee in a colony of social bees. El Abèjon is a fitting name for Fortuna because he strikes and stings his opponents with blinding combinations. Fortuna holds an impressive record of 19 wins, 14 Ko’s with no defeats; stepping up the ladder of success with every opponent.

Lucky for Fortuna, Sampson Lewkowicz discovered his talents and relocated him to training under the tutelage of former junior welterweight champion, Pablo Sarmiento, at the Maravilla Box Boxing Gym in Oxnard, California. “Having him over in Oxnard around the right people will keep him disciplined, so he won’t end up like other Dominican fighters,” said Lewkowicz. “It gives me much more motivation to be in the sport of boxing, to be signed to Sampson Lewkowicz, and training along with Sergio “La Maravilla” Martinez. Being able to see the variety of great boxers that I see in this gym, it’s always been a dream of mine, since I had 4 or 5 fights, that God would give me the opportunity to train here in the United States alongside the greats to become a great,” said Fortuna.

Javier ‘El Abejon’ Fortuna is schedule to face tough veteran Cristobal Cruz (39-13-3, 23 KOs) who has seen better days, and is 0-2-2 in his past four fights. Still, he is Fortuna’s most experienced opponent so far. Those two losses have come to TBV Rankings rated #2 Featherweight, Orlando Salido who is the current WBO Featherweight champion, and #8 Jr lightweight, Juan Carlos Burgos. Cruz went 24 rounds with both these top names amongst others and last time he was knocked out was in 2002. “My team and my trainer have studied this fight long and hard. I feel this is going to be a great fight! His experience only means he’ll be comfortable in the ring, but I’m sure I’ll get the win along with putting on a performance that the fans will love,” stated Fortuna.

Fortuna is no stranger to spectacular performances in the ring. In his last outing he faced touted prospect Yaundale Evans. Evans, like  Cruz came into the ring the more experienced fighter having had several training camps with the likes of Chris John, Yuriorkis Gamboa, Guillermo Rigondeaux to name a few. Fortuna was able to put away the then undefeated knockout-puncher in one round as he put Evans down twice. At 2:02 into the 1st round referee, Mark Calo-Oy called a halt to the contest.

Fortuna was happy with his performance and said, “He didn’t have any advantages over me. He wasn’t faster than me. He just came in to the ring rushing. He didn’t take the time to study me, but I told my trainer I would knock him out. He would tell me we had to train as if the fight would go the full 12 rounds. Once I seen him at the weight in I repeated it to my trainer, this one we will win by knockout, god willing. At the start of the fight I notice he was desperate and rushing. So I studied him until he was confronted by my hand speed and power.”

Looking ahead, one can only imagine what the future has in store for Javier “El Abèjon” Fortuna. One thing is certain a world title is on the horizon. “The future awaits great things. I know this fight won’t be an easy one. That’s why I’m training 100% in the gym for all my fights. With each fight I feel more and more powerful. Many people that are consider experts in boxing tell me this fight will be easy. I don’t believe that I’ll be prepared. I do have in mind that this fight will go the 12 rounds. Nothing is written in boxing but with my preparation at 100%, it will not go the distance,” said Fortuna about his fight with Cruz.

When thinking of the 130 lb division, you can’t help but think of Adrien Broner and what a fight with the two of these men will look like. Of course in my opinion, Fortuna needs to be seasoned a bit longer before making that jump up in class. Fortuna however disagrees and said, “Oh yes, that is one fight I would love. I would love to fight Adrien Broner. I’d fight him anytime, as soon as September. That’s a fighter I have on my radar.”